The Day I Knew I Married The Wrong Guy 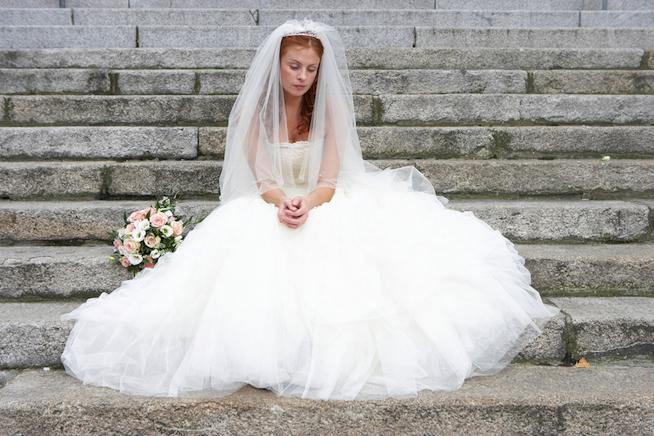 I thought I had failed, even though I knew deep down I really only had a wedding, never a marriage.

I met him on a trip to Canada to visit cousins who had just visited me while on their honeymoon. Steve was their best friend and they set us up on a double-date. He was good looking and funny and we hung out every day that week.

My mother went so far as to take me to a jewelry store, just in case he proposed, to get my ring size. And I got caught up in falling in love. But what I discovered later was that I fell in love with the idea of getting married. Not with the guy.

When I think back, I don’t even remember getting engaged. What girl forgets that? But we did and I moved to Montreal for nine months. He wanted to move to the U.S.right away, but because of immigration rules, was not allowed back into the country until two months before the wedding. So I went back to “visit” for two weeks, the limit imposed by Canada at the time, and just stayed.

The next few months were filled with engagement parties with his family and wedding planning from afar. I got homesick and flew back to Florida in February to finalize the plans. After we ordered the invitations, my dad told me, “Well, those are paid for, no turning back now.” I was sure the feeling in the bottom of my stomach was just nerves, and hopefully excitement.

I heard that the Universe is always sending messages. It starts with a whisper. When you don’t listen, you get a tap on the shoulder. If you ignore that, you get a two-by-four across the head.

Not wanting to go back to Montreal was my first whisper. But my dad had paid for the invitations, right?

Steve’s parents bought us a truck as a wedding present and he brought his prize-posession, a four-hundred-dollar lamp, with him when we drove to Florida in the spring, the truck loaded with shower gifts. Two months later, we were married. Several of my ex-boyfriends were in attendance. Was that a clue?

As we drove to Singer Island on our honeymoon, I was anxious. What had I done? More nerves. More whispers.

Although Steve was a mechanic by trade, he wanted to try a new career and went to electrician school. But he couldn’t hack it, or they couldn’t hack him. And in the next 10 months he went through eight jobs. Losing each job of course, was never his fault. And there it was, the tap on the shoulder.

The shoulder taps continued. He started disappearing for hours at a time. The day he was supposed to get the air conditioning fixed in his truck was of those days. Worried, I called the shop he said he was going to and was told he had never been there. Later, he told me he had been across town at a strip club. As a newlywed, I was a little freaked out and even more upset he had lied to me.

Finally came the two-by-four that knocked me down. I realized that Steve couldn’t make it through the day without getting high. Just as an alcoholic needs a drink every day, Steve needed a joint and it quickly got in the way of our marriage, our sex life, and my self-esteem.

Then I discovered his temper. Accidentally dropping food on the floor might have been comical in some relationships. For him, it was a rage fest. I never knew what his mood would be. I was living with a ticking time bomb.

The day he raised his hand to me was the final blow, so to speak. It was a stupid disagreement over something trivial, and he hadn’t had his fix yet so he was on edge. That was the day I was done. Ten months after we said I DO, I said I DON’T.

Steve packed his lamp in his truck and headed back to Canada. As he pulled out of my parents' driveway where we said goodbye, I crumpled to the ground, a puddle of emotions. I was 23 years old and marriage was supposed to be forever and I thought I had failed, even though I knew deep down I really only had a wedding, never a marriage.

At 16 months, our divorce was final. If there was any gift that came out of that experience, I learned what I didn’t want in a relationship and what I did. It took me a while to regain myself and find the guy I wanted to marry.

I’m happy to report I did find the guy I wanted to be married to and Ira and I had both a wedding and a marriage. We’re celebrating 30 years and counting. I wrote about falling in love with the right guy as part of a special series of short essays on The Good Men Project called 100 Words On Love.

If you like this article, please share it! Your clicks keep us alive!
Tags
married the wrong guy
bad relationships
divorce
marriage

Is It Possible To Die From A Broken Heart?
Barbara Abramson

The Lesson That Made My Marriage Stronger
Barbara Abramson

The Day I Knew I Married The Wrong Guy
Barbara Abramson

Living With The Guilt Of Letting My Father Go
Barbara Abramson