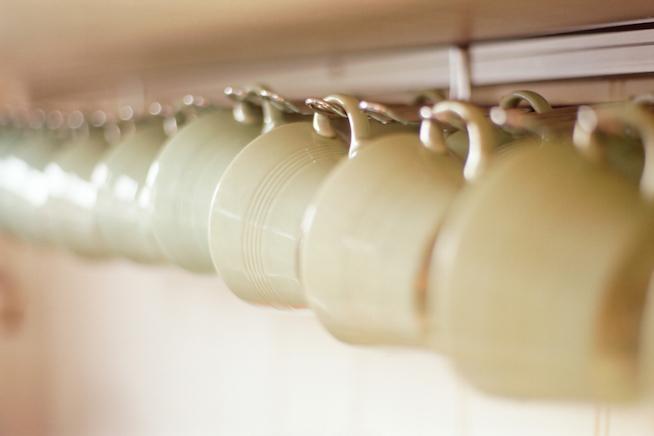 OCD can hide just as well as other mental disorders. We are not all Monk, tapping each fence post as we walk down the street. We’re actually more likely to hide in our house rather than let someone see a ritual like that.

In celebration of OCD week 2015, Ravishly’s resident mental health experts (where expert = person who takes lot of medication [or person in a lot of therapy {OR person who does a lot of yoga

When were you first diagnosed?

Joni: I don’t remember, and now I’m obsessed with remembering. It was actually probably around the time that I couldn’t sit down until I vacuumed lines into the carpet of the entire house, age 25 or so (the year 2000). Before that, people just called it weird. The fact that towels had to be stacked JUST SO was quirky, and praised as "organized."

Jenni: I was a freshman in college...I think? I had dropped out of college after a mental breakdown, so, there’s that (although I am now back in college, obsessing over grades and sobbing about forgetting a five-point assignment). A lot of people actually tried to diagnose me with it growing up, but I always told them NO I AM NOT THAT CRAZY. I thought that evading a diagnosis would also evade the disorder, but that would be a giant NOPE.

Joni: Hey, I got through the whole first year of college! Then I had a panic attack because I had a D in Honors Chem. So I didn’t go back (well, until I was 30). Then I was obsessed with studying. I ended up valedictorian.

What is your first memory of OCD?

Jenni: When I was little, any time I got an insect bite or stubbed my toe, I had to ask my mom, “Am I going to die? If I was going to die from this, I’d already be dead — right?” I also had a 30-minute prayer that I needed to say at each meal or else everyone would be poisoned and die. And corners. I had to check all of them before I went to bed.

Joni: You’re not going to die from a mosquito bite, Jenni. I am going to die in a fire though, or at least 7-year-old me thought so. EVERY NIGHT. For at least five years, my nightly routine started and ended with an inventory of stuffed animals/dolls and agonizing over the decision of which I would save from the fiery death that awaited us all.

What misconception about OCD do you hate?

Joni: I can actually use silverware in a restaurant, thank you very much. Also, cracks: I can step on them. I am not Jack Nicholson in As Good As It Gets (though his compulsions aren’t uncommon).

Jenni: Also, OCD can hide just as well as other mental disorders. We are not all Monk, tapping each fence post as we walk down the street. We’re actually more likely to hide in our house rather than let someone see a ritual like that. People with OCD go to extreme lengths to hide their rituals, and our obsessions, which people forget about, are virtually invisible. You’re really only seeing the symptoms of a much nastier illness, if at all. Compulsions feel intensely private and shameful to me — the idea of other people seeing them FREAKS ME OUT AND MAKES ME WANT TO DO ALL OF THEM AT ONCE THREE TIMES WITH MY RIGHT HAND.

Do you get any strengths from your OCD?

Jenni: I have a pretty great work ethic. I’m a “self-starter” or whatever. It sometimes borders on toxic, because I’ll do work in order to evade the guilt and anxiety that I feel when I’m not working (like literally while I am getting ready for bed). But it really does keep me in check and help me make deadlines. My obsessive brain gives me great focus and a natural inclination for order and organization. Great for a neat desk, but terrible for navigating the actual universe. Entropy, man. It blows.

Joni: Is staying up all night to organize your closet a strength? If so, yes.

What is the most important thing you want people to know about OCD?

TV and media trivialize mental illness. Period. In the same way someone who can’t decide if they like rap or pop music is bipolar, someone who insists on hanging their pants as opposed to folding them is OCD. No. They are not the same.

Some of your obsessions?

Jenni: The emphasis here is some. To name all of them would probably mean writing my memoirs. Like multiple memoirs. Joan Didion style. I obsess over death, productivity, perfection, religion, symmetry, safety, driving, moving, medication, hygiene, and my family’s general health/safety/happiness.

Joni: Dirt. Dirt. Dog/cat hair. Symmetry. Dirt. Also, I spent like six months certain my husband was having an affair with someone he met on Craigslist. I had literally no evidence to either suggest or back that up.

Some of your compulsions?

I absolutely cannot stand anything sticky or powdery on my hands or feet, and will wash them if they are even slightly tainted. I hate socks but I often wear them because even the smallest amount of debris on the floor will send me into a panic-sweep/vacuum spiral. I just went and got socks. Because writing that made me nauseated.

Jenni: Yay, meds! I also take them, with my right hand, from most to least hated, and I have to let a drop of water fall out of my mouth and onto the floor otherwise I will overdose and die. Skin: there can be nothing “dirty” in or on it. Dirty things most notably include acne and dead skin. A few months ago I found a patch of dry skin at the top of my head. I have now essentially scalped myself and have lost a good amount of hair to boot. When I turn off a song or podcast or whatever, it has to end on a "good" word, meaning a word that cannot allude to death at all.

I put down “important” things with my right hand. I’m left-handed, so you can see how this might be a problem. I’ve dropped and shattered my phone because of it, and if I forget and use my left hand, I have to covertly sneak back to whatever it was and tap it. Sometimes a few times until I feel like I’m relaxed. Labels all must face in the same direction. I have to toggle volume and most others kinds of buttons until I feel like they’ll be OK to work on their own. My go-to number for a given compulsion is 20, which is the amount of times I have to jab my toothbrush into the back of my throat in order for my teeth to be clean.

Now I’m uneasy because I can’t list all of my obsessions compulsions, making this list incomplete. It’s obviously not a time-consuming illness at all.

If you like this article, please share it! Your clicks keep us alive!
Tags
OCD
mental health
obsessive compulsive disorder
OCD Week