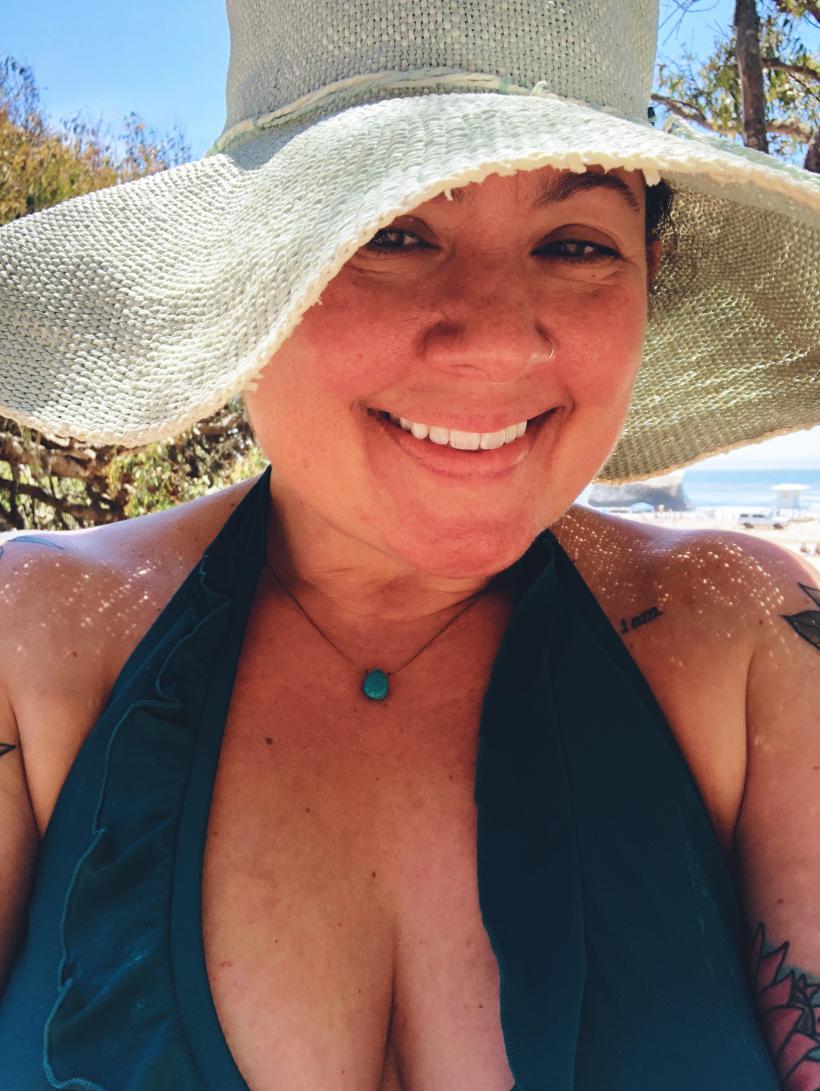 I remember what it was like to be thin.

Are you a thin kid who became a fat adult? Did you spend your youth eating anything and everything paying no attention to the warnings of the older women around you. Was “a minute on your lips, forever on your hips” an adage that you never considered might apply to you?

You see, I haven’t always been fat.

My nickname on the grade school playground was “Boney Joni.” Kids teased me relentlessly about my too-big-for-my-body-ears, my chicken legs, my huge head perched on my tiny body. I was more than just thin; I was skin and bone.

People used to try to shovel food in me. My great grandmother always presented me with an array of snacks after school — Hydrox masquerading as Oreos, stale store brand Chips Ahoy, white bread slathered with gobs of Jif, Dr. Pepper and Coke in tall glass bottles — anything to put a couple of pounds on my frail frame.

I was thin in high school, too. Always the smallest of my friends, I spent summers modeling for a local photographer, perched on fallen trees in skimpy swimwear, thigh gap before it was an Instagram hashtag, collar bones so prominent I looked downright skeletal.

I was even thin into adulthood. After the birth of my first child, the needle on the scale dropped right back to its pre-pregnancy station. Even with my curvier post-birth hips, I slid easily into my size six zipper up the back of the calf Guess jeans. The second and third babies and my mid-20s brought a few pounds, what I’d refer to now as woman weight — the pounds of actual adulthood. I thought I was fat — terribly fat. I was not. I dieted mostly sporadically, engaging in whatever was the latest “fad” — Atkins, Slimfast, grapefruit, cabbage soup, Special K, Weight Watchers, Jenny Craig, that one where you ate pineapple before every meal, then diet pills, laxatives, periods of time I’d eat nothing but popcorn or nothing at all. I “failed” at them all — or they failed me — but my weight, while much higher than I would have liked, never really skyrocketed.

It wasn’t until that fourth pregnancy that the fat stores of pregnancy never went away. After him, the weight crept steadily on. The diets were always miserable and brief. There was the exhaustion of small children and the indifference about my waistband going from tailored to elastic. When I think back to those times, I imagine it was a mix of Mormon potlucks with cheesy potato casseroles and Better Than Sex poke cake, increased inactivity while I stayed at home with kids, some complacency, a lot of disinterest.

After a few years at what I considered simply too fat — once I reached the number I said I’d never surpass — I decided to lose the weight.

I did Weight Watchers, fastidiously counting points until I was back to my early 20s numbers. I went into “maintenance mode” and gained it all back. I did this again and again. Weight Watchers always “worked” and then didn’t.

Now as my 44th birthday approaches and I do the math, I realize that I’ve spent the vast majority of my adult life fat — or at least on the cusp of fat. My closet has been a revolving door for sizes 4 to 20 but, for the most part, I’ve been fat. I’ve been about the size I am now (give or take 20 pounds, which seems like a lot but is a lot less than you think when you’re bigger, relativity being what it is) for the last six years. I had two more kids in my late 30s, and my metabolism sort of gave up the ghost as they say — and I gave up caring.

Before I was this size, I was exceedingly skinny, in the throes of an eating disorder — restriction, obsessive exercise, compulsive calorie counting — unmedicated OCD, and bipolar disorder. Then I stopped dieting, put on all the weight I’d lost (plus another 50%.) I settled into body positivity, settled into my bigger pants, settled into shopping at the back corner of Target. And I’ve been happy to do it.

For the most part, I don’t think about my body at all. If it’s working, I’m pretty content with it. At my age everything is falling, wrinkling, spotting, shedding, turning grey and at this age, I don’t care much. I have more significant hills to die on, fish to fry, things to concern myself with. I have a website to run, three kids in college that I am trying to pay for, two mortgages, one child with special needs, one child with a mental illness, one child who will never shut up, a litter box that needs constant cleaning, and a wool area rug the demands daily vacuuming.

But today I thought about my body.

For the first time in a long time, I thought, I wish I were thin.

I remember what it was like to be thin.

I remember when wearing a bra wasn’t miserable because my breasts were less like cantaloupes and more like oranges. I remember how easy it was to do a spinal twist in yoga with no belly impeding my movement. I wistfully recall a time my stomach wasn't just a curtain for my pubic hair. I remember what it was like to just not feel heavy.

I remember what it was like to easily shop, to never look around the room and try to calculate if I was the fattest person in it, to fit myself in an airplane seat without the person next to me being irritated that my hip was touching theirs, to never have to sit with my arms folded in public because I was just that afraid to take up any space. I remember when I was catcalled — not beacuse I was "disgusting," but because I was "hot." I recall with fondness what it was like to order a pastry at a coffee shop or dessert at the end of a lovely dinner or two (apparently indulgent) scoops of ice cream without ever thinking that the person serving me or the people around me were thinking that I had no business eating it because a fat person doesn't deserve the extravangence of sweets. I remember what it was like to simply live in a world that is easier to live in when you are thin.

I’m just saying it because I missed it today, and I imagine, if you used to be thin, that sometimes you do too. I imagine that even if you are pretty happy fat, even if you were never thin, you sometimes wish you were. I’m just saying this because no matter how body positive or accepting you are, sometimes you may have to sit with the terribly uncomfortable feeling that thinness just felt better. You have to make peace with the truth that diets have failed you, that our culture has lied to you, that you may never be thin again and that it is okay if you are not.

Whenever someone says something like this, the Dr. Googles of the general population run to say that all you have to do is X or Y or Z. Get up off your lazy ass, eat less cake, do more exercise, eat keto or paleo or vegan or gluten-free or whatever and you’ll lose weight. But it’s not always true, and even if it is sometimes true, that may just not be what your life or mental health or space and time will allow. Eating organic artisan food may be out of your budget, and yes, walking is free but time isn’t. You might not have the mobility you used to have. You might have a pharmacy of meds in your cupboard like me that gave you the gift of sanity — and also 20 pounds. People may have told you to get a gastric sleeve or mutilate your body or go on The Biggest Loser or just stop eating altogether, but you may finally, blessedly be in a place in life where you can see how disastrous all that is — which, I want to remind you, is a beautiful thing.

You are not powerless in the face of your fat, but you may never be any size other than the one you are. You may walk or swim or do Jazzercise and eat food that makes you feel great and sleep eight straight hours every night and drink a gallon of water every day, and you may still be fat, and you may still have days where you remember not being fat with a genuine and painful fondness.

Regardless of all of this, you do not have to hate your body — but you don’t have to love it either.

You can be grateful to it and honor it and still think that it used to be easier to live in it.

The only real constant in the world is, of course, that nothing is constant. Not the way you look or the way you feel. Not the state of the union or the state of your bank account. One thing that can be at least close to constant is the awareness that you are a work in progress — sometimes forwards by leaps, sometimes in bounds, sometimes in baby steps. You can sit with uncomfortable feelings and be ok with them. You can wish you were thin but be happy regardless.

If you like this article, please share it! Your clicks keep us alive!
Tags
fat
thin
weight loss
diet
eating disorder