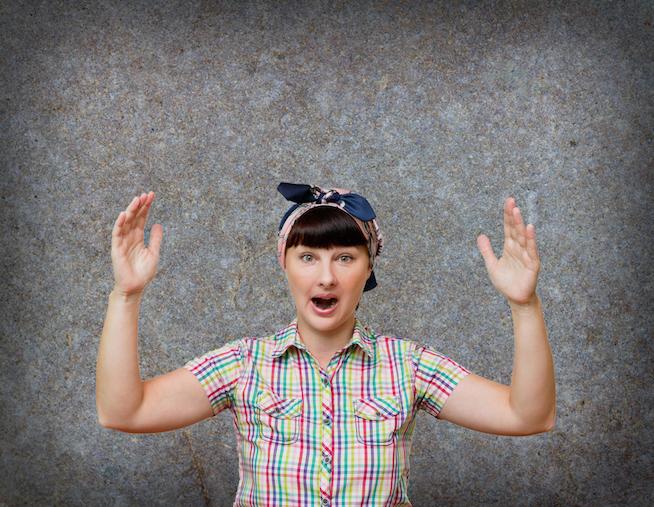 No matter what we do, we're going to screw up our kids in some small way, so just do the best you can.

Somewhere between the birth of my first child and the first time my youngest hurt himself and I told him to “walk it off,” I lost much of my mom guilt. It helps that a very good friend of mine, who'd already raised her children years before, shared some of her own hard-earned wisdom with me:

No matter what we do, we're going to screw up our kids in some small way, so just do the best you can.

Now, I'm not worried if they spend a little too much time playing on their Xbox, watching more YouTube videos than is probably healthy, or eating sugary anything. That's not the sum total of my parenting skills, so they're probably fine.

Just because I don't feel guilty doesn't mean I'm not freaking out. I am a mom, after all.

Do you remember when your kids were little, and you couldn't wait for the next developmental stage? Or you worried if they weren't progressing fast enough? Did anyone else call the doctor when their 18-month-old refused to walk when anyone else was in the room? Just me?

Now, I'm staring down the barrel of new stages. While a part of me is excited, another part is freaking out. Can they and I handle this? There are so many things to worry about. Like...

Letting Them Stay Home Alone. My oldest is 10, and he's asking when I'll let him stay home alone — with or without his younger brother. He's not asking for a weekend alone, just the 30 minutes it takes me to pick up something from the grocery store. The idea of it — now or in a couple of years — makes my heart race and I hyperventilate.

What if he turns on the oven? (Never mind that in 10 years, he's never touched the thing.) What if he opens the front door and lets his brother wander outside? (Even though his brother has little interest in being outside when there's a perfectly good game of Minecraft to play.) What if something awful goes wrong, and I'm not there to fix it or rush them to the hospital? Yes, he knows how to dial 911 and how to get to a neighbor we trust...but still!

Puberty! It's coming. I can feel the change in the air around here. The oldest is sleeping longer, having weird mood swings, and taking much longer showers. Of course, when I gently probe to find out what he knows, thinks, or thinks he knows, I'm met with a “Mo-om! That's embarrassing!”

Oh God, it's happening. The puberty. Eventually that leads to the sex. I don't think I can handle all these changes. Crusted over socks, boy-man smell, and all the lotion I'm sure I'll have to buy — I'm not ready for any of it.

Driving. Holy hell, y'all, eventually I'm going to have teenage drivers. I'm not good with family members who are 20 years older than me driving me anywhere. How in the hell am I going to handle a 16-year-old? And I don't have a single educational bone in my body, so I may have to pay someone else to teach him.

Either way, I can't handle thinking about him behind the wheel because, invariably, my vivid imagination immediately moves to texting while driving (even though he's usually the one telling me to put my phone down), running red lights, and cars wrapped around trees, poles, or other vehicles. It's enough to make me drink.

College And Moving Out. OK, to be honest, there's a part of me that's a little thrilled. I honestly don't think I'm going to be someone who pines for her children once they leave the nest. Knowing my kids, they'll find a way home for a hot meal — and to do laundry for free. (That's what I did.) But what about student loans, bills, the money they'll ask me for, and living alone (I'm still a little worried about that oven thing)?

Will they pay attention between now and then to learn the essentials of keeping themselves alive and relatively safe once they're no longer under my roof? Am I equipped to teach them what they need to know — before life teaches them the rest? Will I ever sleep through the night once I can no longer check on them on a whim and know they're safe under my roof?

Yes, of course, I'm worrying about things that haven't happened yet. If I'm not careful, I'll make myself nuts over it (too late). But I feel like I've gotten good at this whole mom thing from age birth to about 9. It's the coming stages that are freaking me out. Every part of our life is important, but the decisions and choices they (and I) make from here on out will have a huge impact.

That's a lot of freaking pressure.

I'm gonna need more wine to get through it. Or an actual chill pill.

If you like this article, please share it! Your clicks keep us alive!
Tags
mom guilt
parenting
anxiety