Sizeism Makes It Expensive To Be Fat And Wear Clothes 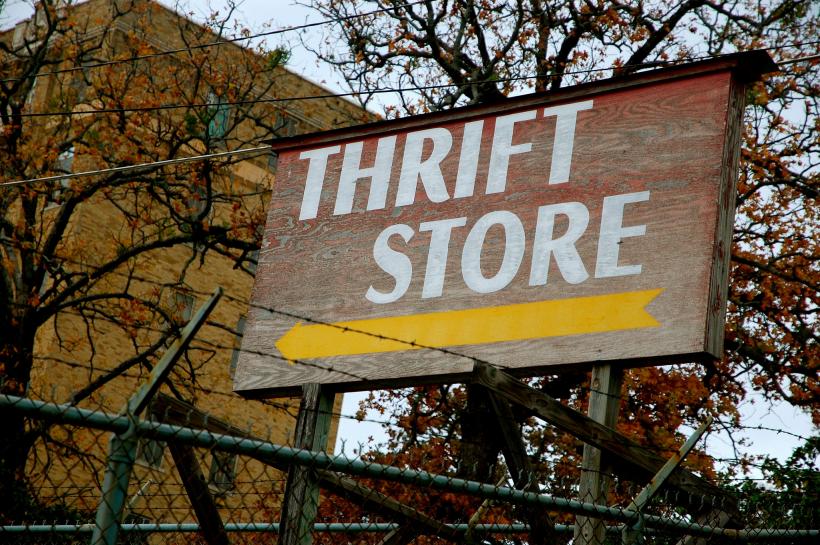 These days, I’m lucky if a thrifting ‘adventure’ yields two semi-wearable tops; even then, odds are that one of them is going to be cut funny... Image: Steve Snodgrass (CC BY 2.0)

There is a tangible, real-world economic cost to being a fat person in America.

Years and years ago, I used to be thin.

I used to live a beautiful life wrapped up in my thin privilege, calling myself an ally to my fat friends. I was blissfully unaware of the many joys and freedoms my privilege-blanket granted me.

Then I got fat, and everything changed (my life is still really beautiful, though).

I’m not here to tell the story of how I got fat, though. I’m here to talk to you about money.

Back when I was thin, a fat friend needed to go to the thrift store to get some shirts. I needed a couple of things too, so I was like, “Ooooh, I love thrifting — let’s go together!”

So this friend and I hopped on our bikes (yes, fat people ride bikes, y’all!) and headed to the nearest thrift store.

When we got there, I shopped the way I always shopped. I bounced around from rack to rack, looking at things out of order, holding them up to the light to see if I could judge from squinting if they would fit on my body.

There were no fitting rooms, because this was in a poor city, and poor people in poor cities are pretty much assumed to be thieves. If I couldn’t tell by glancing at the item, I would shimmy it on over my street clothes, or ask my friend what she thought.

I was having a ball, and ended up picking out so much stuff that I had to narrow down my selections and put some things back.

It was while I was returning some of my items (a sweater that fit a little weird in the arms, a skirt I wasn’t sure if I could put in the dryer) that I noticed that my friend looked anxious.

She wasn’t having the good time I was having, and I couldn’t figure out why. So I tried to encourage her to loosen up, offered to look for things for her instead of just myself.

When we went to the checkout, I had 20 bucks' worth of ultra-cheap clothes, which was great, because I barely had any long sleeve shirts at home, and $20 was my entire clothing budget for the summer.

But my friend had three items.

I wondered why, and figured it was just that something had stressed her out and she wasn’t feeling as up to shopping as she had on the ride over.

If there’s one thing that the body positivity movement and fatphobic “obesity epidemic” alarmists can agree on, it’s that there is a tangible, real-world economic cost to being a fat person in America. Those who live in fear of the obesity epidemic even admit that a sizeable part of that cost, especially for women, comes in the form of lost wages.

Where we differ, and hugely, is in how we should respond to this financial reality. Those of us who believe in body positivity see this as an injustice, and yet another of the many reasons to end the stigma faced by fat people.

The obesity epidemic crowd, on the other hand, argue that the cost of being fat, while based in stigma, is just one more reason to avoid getting fat like the plague, and to get un-fat as fast as we possibly can!

[A]lthough the hunt for the perfect outfit at the thrift store was a thrill when I was thin, as a fat person, the hunt was just downright depressing.

This argument reminds me an awful lot of a homophobe I once knew, who explained to me that people have always been treated poorly for being “different,” and that if gay people don’t like it, we should simply stop being gay.

Y’all can tell which side of this argument I’m on.

I am somewhat familiar with the numbers, but I didn’t feel (or at least, notice) the economic impact of fatness on my own life for quite awhile. That is to say, I didn’t notice it until I started having to buy clothes as a fat person.

And then I had a kid, and all of a sudden I had to buy clothes — not just as a fat person, but as a fat postpartum person.

Oh yeah, and I had to do it while raising a baby in poverty.

I tried buying clothes secondhand: After all, that is the most economical way to purchase clothing. But although the hunt for the perfect outfit at the thrift store was a thrill when I was thin, as a fat person, the hunt was just downright depressing. This is partly because it’s just plain harder. For whatever reason, there seems to be less clothes for people my current size at my local thrift store.

But it’s also depressing because after you try it a couple of times, you realize the sad truth: There is no perfect outfit to find.

These days, I’m lucky if a thrifting “adventure” yields two semi-wearable tops; even then, odds are that one of them is going to be cut funny or otherwise just look totally bizarre on my body. I leave the thrift store unable to find what I needed, sweaty, exhausted, and (sometimes) on the verge of tears.

So I stopped trying. I, a poor person, bit the bullet and switched to buying clothing new.

This is full of its own unique challenges for a bigger lady. Outlets that strive to be body positive — like Modcloth — are completely out of my price range. And many brick-and-mortar stores don’t stock much in the way of plus sizes, which forces fat people to shop online.

But at least I sometimes find clothes that a) I don't totally hate and b) actually fit my body.

And I put it off for as long as I possibly could, but at a certain point you just can’t wear stained maternity tops every day anymore.

And now I’m left hoarding my few brand-new articles of clothing, afraid to throw away my stained maternity shirts lest I need them. (No, I’m not having another baby.)

I wonder how many other places in my life I’m getting screwed over simply because of my size.