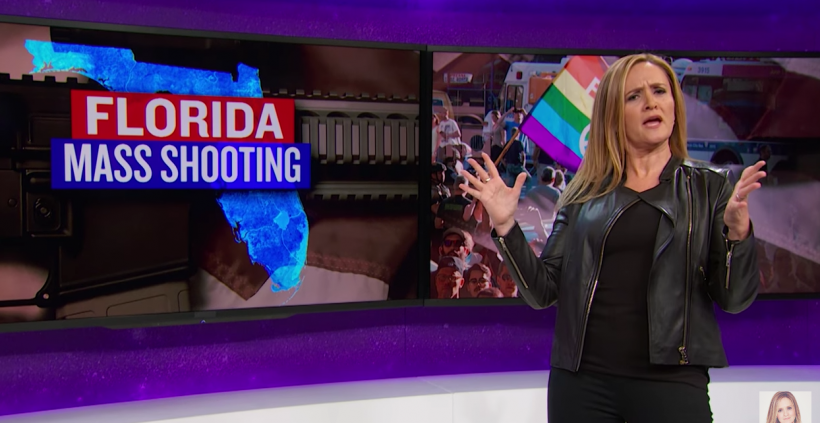 She doesn’t pull punches, she respects her audience's intelligence, and she’s funny as hell. Image: TBS.

She is everything I loved about The Daily Show and more.

When Jon Stewart took over The Daily Show from Craig Kilborn in 1999, the reviews were positive, with a caveat: Stewart did things differently from Kilborn.

It was good, they said, this new energy on the show — but they weren’t sure it would work long term.

In the words of Madeleine Smithberg, the co-creator and executive producer, the show has lost “the crystal-clear joke that we were a parody of the news.”

“You really believed that Craig was that guy behind the desk,” Ms. Smithberg said in an interview. “He looked like everyone you've ever seen on TV. Jon Stewart has an unbelievable range of things that he's capable of doing, but he delivers headlines like a guy telling jokes. He's brilliant, but you don't really believe he's a news anchor.”

It seems ridiculous to think about it now: It’s precisely the “Jon Stewart-ness” of The Daily Show that made TDS such a huge success after Kilborn’s departure.

Stepping into the role during President Clinton’s impeachment proceedings and going on to report on the horrific and bizarre 2000 election, it seemed like the only way to do justice to the absurdity of the actual headlines was to treat them like the sad-funny punchlines they mirrored so closely.

It was this willingness to let Stewart’s — or his character’s — personality play a role in the show that reinvented TDS and ultimately made it so successful. Whether he was doing celebrity interviews, interacting with Daily Show correspondents, or making thinly-veiled penis jokes, Stewart never let the format of the show upstage the personalities on it. He interacted more with the correspondents like Samantha Bee and Larry Wilmore than his predecessor had, and watching those personalities develop was almost as funny and interesting as what they were actually saying.

When Jon Stewart left the show I, and many others, felt the loss as though it were a personal friend. Where were we going to go when we wanted a take on the news that managed to be funny without diminishing the seriousness of the issues? I gave Trevor Noah a try, but it just didn’t stick. It was like going to a favorite old restaurant without the best friend who always accompanied me.

The food was still delicious, the ambience still fun, but there was something missing that made watching the show almost painful. It’s Jon Stewart’s Daily Show without Jon Stewart. Trevor Noah is a great comedian and it’s wonderful to see more diversity on TV, but he hasn’t (yet) turned the show into his own incarnation of it.

To say that Samantha Bee’s show is everything I wanted and more would not be an overstatement. It retains all the wit, energy, and incisiveness of Jon Stewart’s Daily Show while being its own — distinctly awesome — animal. The simple fact that it’s not The Daily Show allows Samantha Bee to flavor the show with her own fabulous Samantha Bee-ness.

Instead of sitting behind a desk as a pseudo-news anchor, Samantha Bee stands in front of a live audience, addressing them and the camera directly with an unapologetic aggressive candor that’s downright cathartic to witness.

Bee also steps beyond the role of news reporter in the issues she chooses to cover. The weekly format allows her to go more in depth than just which elected official is being a hypocritical, misogynist jerk.

She’s gone to Syrian refugee camps, reported extensively on the backlog of untested rape kits (and the negligent politicians who refuse to do anything about it), and gun control.

She doesn’t pull punches, she respects her audience's intelligence, and she’s funny as hell.

She is everything I loved about The Daily Show and more.

Of course, this is a completely unfair comparison. The way Stewart changed the landscape of late night news/political commentary paved the way for both Trevor Noah's Daily Show and Full Frontal with Samantha Bee (among other great like Larry Wilmore and John Oliver).

In some ways, I’m comparing apples to oranges. Still, if I'm watching TV and I hear something that makes me think, Oh man, I can't believe someone said that on TV — that is hilarious and on point! you can bet your back hole I'm watching Full Frontal.