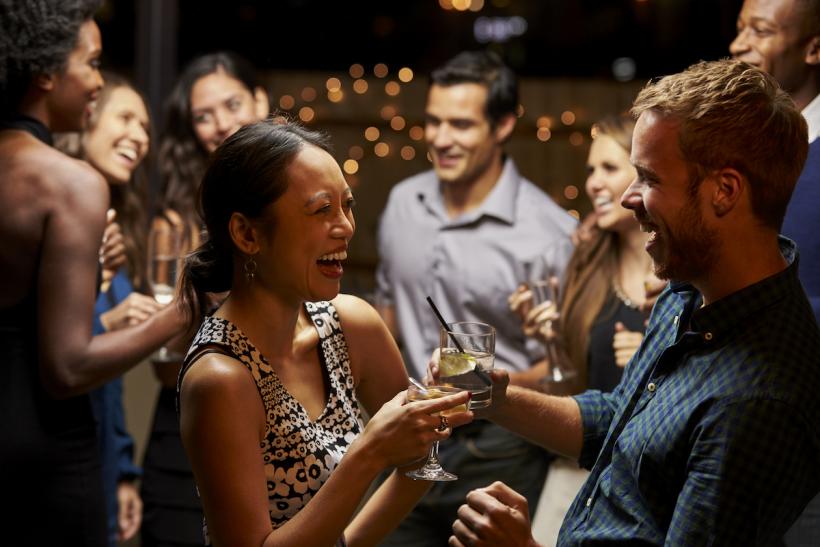 The first step isn’t to admit I have a problem. I don’t. Before I stopped drinking, there was rarely anything to drink in the house apart from birthday whiskey and the occasional six-pack.

This isn’t my act of defiance. I didn’t stop drinking to stand out or be peculiar. The looks from servers when I pass on a cocktail are easy enough to translate. I’m not trying to be difficult, I want to tell them. I’m not going to be a cheap tipper.

Reactions from the few people I’ve told have been hard enough to address. No, I’m not going to stop going out. What do you mean "will I still be fun?" (Am I not fun when I don’t drink?)

This isn’t my act of compliance. Sure, I’m not supposed to drink on my medications. Wine and Effexor/Depakote/Klonopin makes for sleepiness, dizziness, and impaired judgement. Depression already makes me tired, mania screws with my thinking, and I’m lucky enough to have inherited my mother’s knack for vertigo. Apparently, Adderall could make me feel less drunk, but that could mature into alcohol poisoning, so I’ll pass.

In any case, I used to drink on my meds.

A liquid depressant can dull mania, but it’s too easy to push past the midline of normal and fall into straight depression, and I don’t need anything to exacerbate the ADHD I just got under control. On the other hand, anxiety and post-traumatic triggers can be easily put to bed with a pint…

About a month ago, I went to a beer fest with my partner, my best friend, her boyfriend, and his friends. It was one of those gorgeous afternoons that blended into night while we argued over whether or not it was too soon to hit up the food truck. We staked out a barrel to hover around because all the tables were taken, and I bonded with the new girls over tattoo stories and proposal stories and other stories I’ve since forgotten.

I don’t want to be one of those women who thinks that wine soothes the strain of parenting, that a cocktail with an umbrella makes a vacation, that girls’ nights or date nights run smoother with a glass in your hand.

A beer and a half was a good stopping point, but the end-of-the-night tally was three, plus a pizza. I could hear myself speaking too many of my truths and part of me cared immensely, but another part overshadowed her, saying C’mon — this is how you bond.

Part of that is true. In college, I drank until the party ended, dropping secrets and intimacies into girls’ ears until we swore we were each other’s new best friend. We’d hang out soon, we promised, we pinky-swore. How many of those instant Facebook friends did I ever see again? How many were party pals, seeing me only at the end of sober?

After college, I waitressed my way through poverty, paying for a bat-and-roach infested attic apartment with Applebees tips. After Sunday and Monday shifts, the closing crew would gather at the dive bar down the street, swig our way through the cheapest beers, accept an incredibly discounted tab, and tip extravagantly.

Sometimes we’d even slog to P and J’s house (sadly, for me at least, there was no “B”), to drink their cheap beer and whatever else we could afford from the gas station’s coolers.

Beer, wine, shots: these were my gateways to camaraderie. If I was a shy sober, I was a bold boozer. I was a hugger. I was a sharer. I never let myself just be in a social situation. A drink or two and I would stretch myself until I was bigger, funnier, sexier. If I wasn’t the entire group’s middle, I would create a subgroup. And it felt good.

Drinks became medication. Why breathe mindfully and talk to myself positively when I could find respite in a glass? There’s an IPA for pushing past friendship into flirtation. There’s a malbec for keeping career-tears at bay. There’s a whiskey for forgetting your separation. There’s a tequila for celebration.

There’s a gin and tonic for reading alone in the attic. And then there’s three more.

I woke up after the beer fest with foolishness draped around me. I had met clever, interesting women I wanted to befriend and knew —knew beyond a doubt— that my friend requests had been denied (they weren’t), that my tipsy-or-let’s-face-it-drunk personality hadn’t charmed anyone (it had), that I couldn’t supplement my “let’s be friends!” beer-soaked text with a friendly, sober follow-up.

And I didn’t. Despite my every desire to make friends, a sometimes-tricky task as an adult, made trickier by working from home, it has been a month since I sent This is Liz. We met. We are (I meant “ate”) the same pizza. I drank the same beer as [your fiancé] and I’ve been silent since.

Every so often, I look at that message as it drifts further and further down my inbox and urge myself to be an adult. Liz, if you want to get together with someone, tell them it was nice to meet them and you’d like to do it again sometime, I reason. My logic is valid, but my memory treats me unkindly.

I think of my shakiness in the Uber heading out to the brewery, knowing I wanted to be there but that something bad would happen because I left the house. I reasoned my way out because I knew a beer would hush Liz’s Anxiety and turn it into Liz’s Confidence.

I think of the day I nearly cried because I couldn’t get my medications. If an ER doctor had thought for a moment that I had exhibited drug-seeking behavior (which wouldn’t be a stretch, considering I needed anti-depressants, anti-psychotics, and controlled substances), I would have gone into withdrawal and potentially into psychosis. I know because I Googled it.

When I finally emerged from the hospital with my scrips, my first stop was the pharmacy. My second was the liquor store.

Once I made a rule that I could only drink bloody marys, mimosas, or pinot grigio before 1 a.m., I soon discovered that my dinner costs would be mostly alcohol. And my partner would tell me I could keep my liquor down but I couldn’t hold it — I was loose. At this point, I had every emotion spill out and smear my makeup across my face, like a clown.

I don’t want to be one of those women who thinks that wine soothes the strain of parenting, that a cocktail with an umbrella makes a vacation, that girls’ nights or date nights run smoother with a glass in your hand.

I’m becoming a connoisseur of ginger beer and I’ll happily drink tonic with lime, though I feel slightly less posh for disliking seltzer. I keep my water bottle topped up and lug my big purse around so it (and some books) can accompany me out. I haven’t been to a party yet and I’m not looking forward to the first time I explain why I’m declining a capital-D drink. I’ll meet that anxiety with a BAC of zero and see what happens, how my adult self plays in public without a crutch.

Just to be clear, the first line of this essay is misleading.

Hello, everyone. I'm Liz. I solved my problem.

If you like this article, please share it! Your clicks keep us alive!
Tags
drinking
not drinking
sobriety
self care
mental health
mental wellness