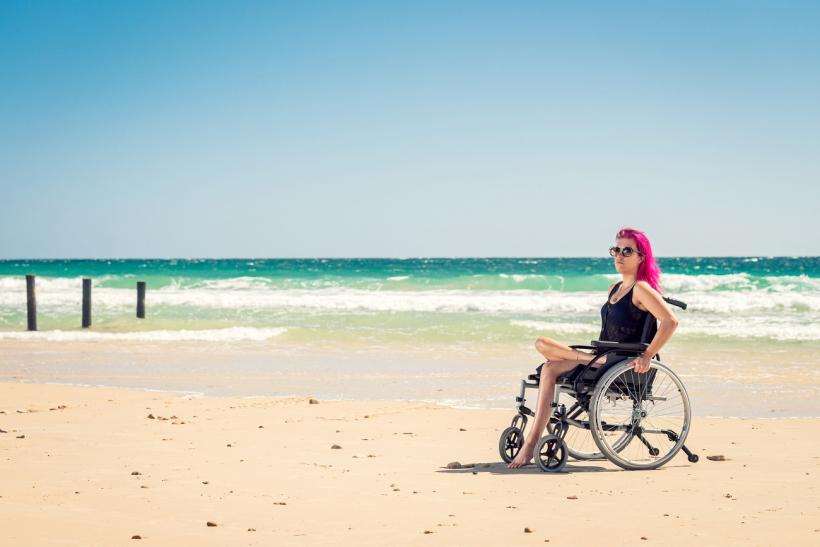 Social media accounts and news outlets foam at the mouth to fill themselves with cell phone videos of such prom-posals, even though these do the polar opposite of normalizing disability.

Spring is here, meaning prom season is upon us. As much as my 33-year-old self loves the vicarious joy in seeing what the kids are into — which is decidedly not French twists and chokers anymore — I shudder at the thought that my news feed will soon be inundated with a certain kind of prom-posal that stresses me out.

The kind of stories and videos I’m talking about are ones you’re surely used to seeing in your own feeds: ones where a person with disability is asked out to the big dance.

You know the scene: quarterback of the football team gives Girl With Autism a cookie cake frosted with the question “Prom?” Everyone claps. Video goes viral.

These pieces tend to spread because of the warm fuzzies they give the general population. However, as a girl who happens to be in a wheelchair, these videos make me very uncomfortable. Without fail, the person doing the asking is framed as a hero, and sometimes they are even interviewed on a talk show (if their story was especially popular).

The ask-ee? Well, they're usually diminished to the recipient of a charitable act.

For a while, this breed of condescension was relegated to daytime talk shows and outlets with the journalistic integrity of Inside Edition.

But then social media seeped into every crevice of mainstream media. Clips about people with disabilities doing typical things are appearing on the nightly news, well — nightly.

(If you are scratching your head at that term, I encourage you to check out the amazing Ted Talk that Stella Young gave on the topic.)

“This boy is blind, but can sing like an angel — watch his inspiring performance!”

“This woman born without legs just had a baby! Isn’t it a miracle?”

Meanwhile, I am usually on the other end of these, shouting the seemingly obvious: “What does vision have to do with vocal ability?” or “Legs aren’t attached to a uterus; why can’t she have a family?”

Given that I was a communications major, I get why these types of headlines are so accepted (even if they are nonsense). People like to feel better about society and hear something that isn’t terrorism or political infighting.

All I wanted as a high school junior was to do normal teen things and not have my differences pointed and “awwwwed” at en masse.

However, these seemingly innocuous stories are, in a very subtle way, reducing the subjects to their base level, judging them solely on their disability, and assuming that they are incapable of the same things as their peers, like hobbies or love.

When I was in high school, I went to prom… with a date. Like 100% of teen girls, I was maxed out as far as insecurity and skewed self-image were concerned. Imagine my mortification if I, a wheelchair user, had been asked to the prom by an able-bodied friend — and received national attention because of it.

All I wanted as a high school junior was to do normal teen things and not have my differences pointed and awwwwed at en masse.

If a news source had hinted that my date was engaged in some kind of bizarre community service, basically insinuating that I was the most undateable creature on the planet, I likely would have taken the (very mature) path of locking myself in my bedroom and crying until graduation.

Kids today don’t have the luxury of flying under the radar. Social media accounts and news outlets foam at the mouth to fill themselves with cell phone videos of such prom-posals, even though these do the polar opposite of normalizing disability. In fact, their popularity is immensely damaging to our uphill struggle to be treated not as a spectacle, but just like anyone else.

If a person asks their classmate with a disability to prom, it should be because they want to go with them, or, perhaps, in part because they feel it’s a nice gesture — not because of public recognition and praise that are both peppered liberally with words like “amazing” and “brave.”

Ugh. It’s enough to make me rip my hair out.

(But then, who knows? Maybe the “story” of my rocking a bald head and a wheelchair would be trending. I can see it now: “You go, girl! Brave young woman shows us the true meaning of inspiring beauty!”)

I get it. Healthcare and transportation and the overall status of rights for people like me suck, so this seems like small potatoes on the spectrum of disability issues.

But, unfortunately, I think it is reflective of a bigger problem. Often, when people with disabilities are portrayed as being “just like anyone else,” they are more or less being made into a curiosity, which only further highlights their differences. Facebook posts can easily shape-shift into 21st​-century sideshows.

Here are a few things to ask yourself before you hit that “share” button:

I know it’s going to happen every year like clockwork, but just once I would love the headline to read a bit differently:

“Girl who happens to be in a wheelchair gets asked to prom… because she’s super fun to be around!”