Be Naked All Summer — No Matter Your Body Type! 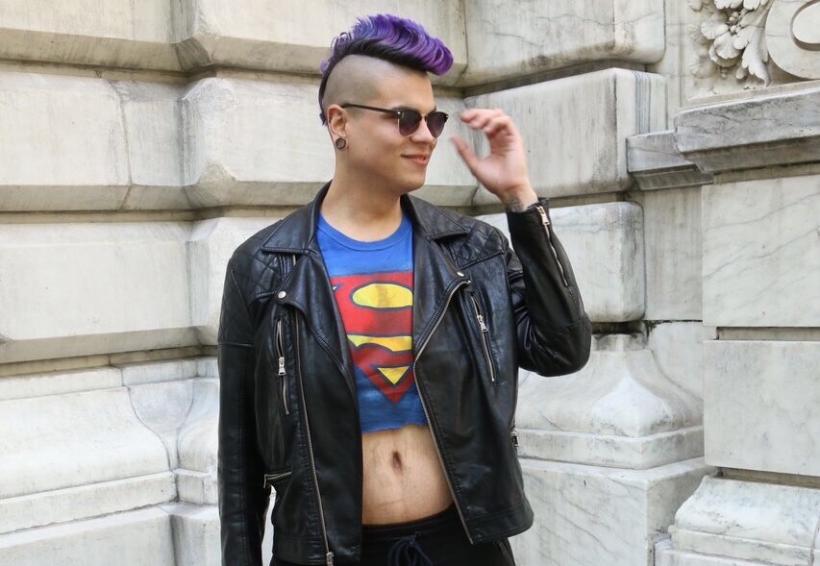 Your beauty does not need conform to some social norm to be worthy of existence. Image: Revelist.

You shouldn't have to “earn the right” to wear a certain item of clothing.

Summer is upon us.

It’s that magical time of year when the seat of a parked car burns like hellfire, children run rampant through the streets at all hours, and the mosquitoes are finally freed from their prisons in the dirt to feast on our blood.

Isn’t it wonderful? There’s something very Disney-esque about the summer, a whimsical feeling in the air that makes you feel like anything can happen.

Of course, summertime also seems to come hand-in-hand with partial nudity. Wearing next to nothing out in public is just as important a part of summer as barbecues and trips to the beach.

That is, unless you’re anything outside the socially acceptable body types. Then it suddenly becomes an opportunity for people to dole out their own specific kind of “fashion justice.”

This is when it becomes a problem.

You should be naked all summer if you want to, regardless of your body type.

Let me start by giving you a bit of context on who I am: I’m a 6’5” Hispanic dude. Years ago, I weighed nearly 500 pounds. After losing over half of my old weight, I treated my leftover excess skin like a secret for three years. After opening up about it, I recently underwent two procedures to remove the excess skin. These procedures have left me with giant scars on my chest and waistline.

I know about being insecure in your own skin — no pun intended.

If you wear that bathing suit out and find yourself victim to abrasive comments, as many of us often do, ask yourself just one question: What are these people trying to communicate to me?

If they’re trying to encourage or support you, then wonderful.

But any mean comments or insults should be cast aside like the toxic waste they are.

Allow me to explain.

I used to believe that judgment and mean comments were just inherent parts of the Internet and/or human nature. “Never read the comments” was the motto I lived by.

Recently, though, I became part of a support system that really changed my cynical perspective on the matter. The day after my most recent procedure, a friend added me to a private group on Facebook.

The rules of this group were simple:

At first, joining seemed like a cheesy and rather pointless idea. But this group quickly proved to be a unique and powerful support system during one of the most confusing and sensitive times I’ve ever had, in terms of body image.

People of various gender identities, sexualities, ethnicities, and body types posted selfies with captions about the things they were going through; others would tell them how fantastic they looked and send positive vibes their way.

As soon as I posted a photo of the fresh scars, I was immediately met with kind words about my recovery, how good I looked for being a few days out from major surgery, and how people were proud of me.

They didn’t know who I was — they didn’t need to.

For them, kindness and support was an inherent part of the interaction, their default setting.

Simply put, this was the antithesis of so many discussions I’d seen on the Internet regarding whether or not someone “should” wear a certain item of clothing based on their gender identity or body type. I didn’t think it was possible, but somehow these people gave even less of a tolerance for that sort of toxic behavior.

(I put “should” in quotation marks to emphasize what obvious bullshit it is. Did that come across? Great.)

Your beauty does not need conform to some social norm to be worthy of existence.

The problem with the Internet is that many people suddenly feel like it’s their responsibility to keep others in check. So many surfers of the World Wide Web suddenly feel like they’ve turned into some sort of self-esteem Batman whose sole task is to tell people what is and isn’t acceptable in so-called “civilized” society.

Never, like, with institutionalized racism or sexism, though. Mostly just the petty shit — like whether or not chubby girls are “allowed” to wear crop tops.

It’s cloth with sleeves, not a Nobel fucking Prize.

We have value regardless of what form our bodies take, and we deserve to live in our own bodies with pride and confidence. When we’re insecure, kind words and support offer reinforcement and can motivate us to continue to grow. There’s limitless value in that, no matter how independent you are.

You can do it all on your own — but you shouldn’t need to.

I’ve always been an advocate for being true to who you are, regardless of what others may think. While I continue to stand by this ideology, I’ve grown to understand how unrealistic it can be. Human beings are social creatures who want to be liked, and more often than not, criticism and confrontation are important parts of our continued growth.

So wear that two-piece bikini, those jean shorts with no shirt, that form-fitting muscle tee, and wear it with pride.

You are not something that needs to be judged or qualified. You are not numbers on a scale or a list of measurements that are only valid within specific ratios. You are made of the stuff of the world — of love and compassion — an aggregate of a lifetime of experience worth so much more than the sum of its parts. You are the universe observing itself.

Your beauty does not need conform to some social norm to be worthy of existence.

So, wear as much or as little as you want this summer!

Just wear the shit out of it.