Take The Cake: Are Fat Positive Trump Supporters, Like, A Real Thing? 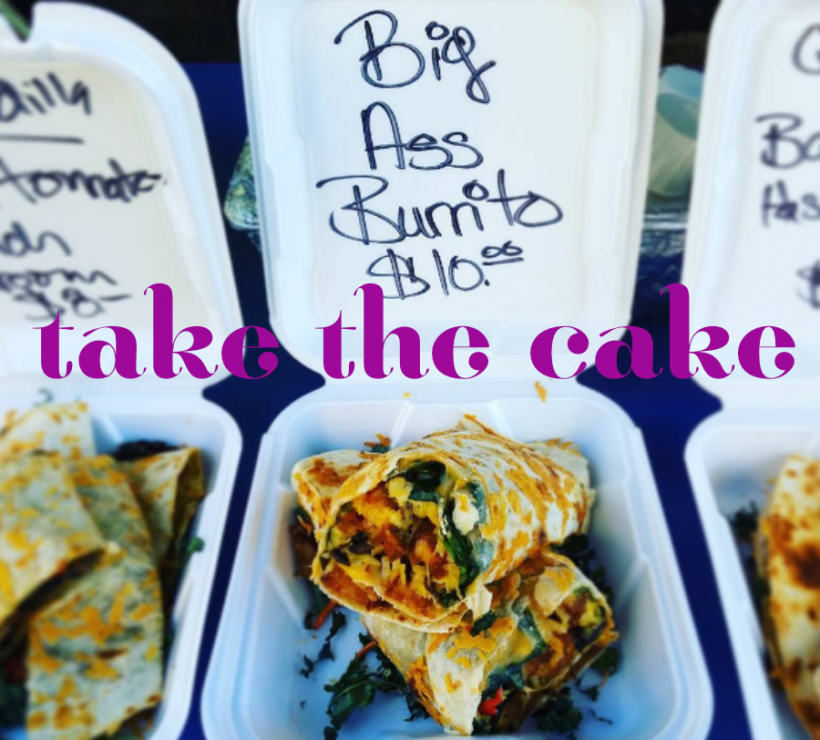 I am currently in Los Angeles trying to forget that the election happened.

I am sitting in a pizza place on Hollywood Blvd that advertises "giant slices" and has framed stills from the Godfather movies. Tinny banda music tinkles barely audible beneath the huge TV that plays machine gun oriented films all day. It smells like cigarettes and parmesan.

I jettisoned myself out of San Francisco in an attempt to leave my apocalyptic stupor behind for just a few days.

I have been vacillating between confusion and panic since last Tuesday.

The white dudes in my life are clucking abbreviated relief speeches with slightly contained exasperation, while the people of color, queers, and trans folks in my life are mobilizing lawyers and other resources between panic attacks and healing circles. My life is largely lived out in political spaces among feminists, humanitarians, artists, and academics. Now and then I engage with suit-and-tie liberals, and sometimes when I go out into the world, I run into a vociferous fat-hating bigot.

One group that has no clear place in my life is that of women who believe in body positive principles but who also voted for Donald Trump.

If your response was anything like mine the first time I heard about this sub-population, perhaps you too need a second to pick your jaw up off your mini-skirt, or begin cleaning whatever you just threw at your wall before it starts to dribble onto your over-loaded outlet.

The first time I heard about this group was a few months ago. Leading up to the election, a friend told me she had met a woman who was really into fat liberation/anti-dieting, but was put off by the pesky fact that no one who was writing about this issue seemed to like Trump. When I heard this I just about ran my car off the damn road, and then she had to sit through, like, a 45-minute tirade about how that sort of thing was every shade of unacceptable. Since then I have encountered others like the woman my friend told me about.

As I began to think more about these fat positive Trump supporters, I thought maybe I had missed something, maybe in some way this could possibly make sense if I could just get deep enough into my mind palace or something.

Fat liberation is about freedom, a freedom that is deeply tied to struggles for gender equity as well as other forms of justice. Voting for Trump means voting against everything that fat liberationists have fought for. Period.

Spending energy attempting to do mental olympics was not where my precious time needed to be spent (there are people preemptively sobbing about lost healthcare and undocumented folks scrambling to mobilize and young trans people committing suicide right now in the wake of the election results). And my grandpa always told me to trust my gut.

My gut says that this is some bullshit.

I feel pretty clear on the fact that these women are compartmentalizing and refusing to be accountable to the principles that fat activism and activists have long held dear. Fat politics has always been deeply tied to feminism because diet culture disproportionately affects women:

Women are likelier to get gastric bypass surgery.

Women are likelier to experience dissatisfaction with the way they look.

Diet culture maps onto sexism and the idea that women are inferior and therefore deserve to live less fulfilling lives.

The refusal to diet is a deeply feminist act.

Voting for Trump - a proud sexist and unapologetic perpetrator of sexual assault - is an anti-feminist act.

Refusing to diet is not simply a mechanical choice; at its core, this choice is about refusing to be controlled, and that history of control has roots in white supremacy and western imperialism and the idea that if we can control what we eat then we can control whether we want to do dirty things like have orgasms.

Restricting (aka dieting) is a metaphorical act that seeks to convey a woman's willingness to bow to cultural expectations of her submission. Yes dieting is deeply shitty and boring, but the compulsion to diet is part of a legacy of controlling women's lives. It is impossible to separate that legacy from the choice to stop restricting.

Fat liberation is about freedom, a freedom that is deeply tied to struggles for gender equity as well as other forms of justice.

Voting for Trump means voting against everything that fat liberationists have fought for. Period.

It seems to me these women want their lives to be better while disregarding the impacts of their voting decision on other people's lives. It seems to me they want to stop dieting because it will decrease their personal experience of suffering and they prefer not to think of this choice as a political one. The problem with that kind of thinking is that it undercuts the very population that is advocating tirelessly for the changes that ultimately benefit all of us. Fat activism isn't possible without the right for feminists to speak openly and demand accountability. Fat activism is less viable when activists are busy fighting for the right to abortion and healthcare.

That is the reality.

Attempting to divorce fat liberation from a greater historical and political reality is an act of extraordinary entitlement and willful ignorance. Cherry picking the parts of an ideology that exclusively or primarily suit one individual isn't how justice works.

So if you're someone who identifies as a fat positive Trump supporter, please take a deep breath and read this article one more time.

If you like this article, please share it! Your clicks keep us alive!
Tags
Trump
election 2016
fatphobia
fat positive
Body Positive