Ask Erin: Am I In A Toxic Relationship? 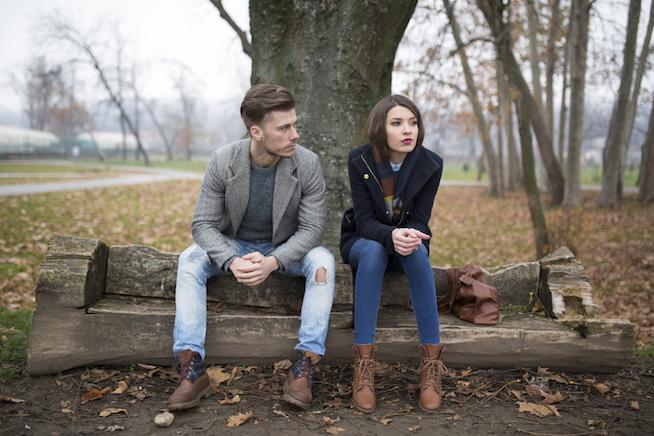 She’s made all the mistakes, so you don’t have to…Ask Erin is a weekly advice column, in which Erin answers your burning questions, about anything at all.

I think I might be in a toxic relationship and I don’t know how to get out. It’s a complicated situation.

My boyfriend and I have been together for almost two years. I am just beginning to realize that he has a serious drinking problem. When we moved in together, about six months ago, it became more apparent to me or it got worse, although I think he’s had this problem all along.

Over the past two years, I’ve dealt with a lot. He has used me to hurt his ex-wife’s feelings and he has used her to hurt me. I caught him on the phone with her getting advice about our problems. He is emotionally and verbally abusive at times, usually when he is drinking. He has not been able to keep a job. I am the one paying all the bills, including things for his two-year-old daughter. I have even caught him stealing money out of my purse.

Recently his ex-wife contacted me and told me that he had been sending her inappropriate text messages, telling her she still looks hot and he thinks about how good their sex life was. I was really hurt. Other times, he has sent her text messages, pretending that they were supposed to go to someone else, saying how happy he is with me etc., and then saying, “oops, I meant to send that to someone else.” I think he is doing that to mess with her.

I am in such a fog of emotions and I can’t get out. I am hurt and tired all the time. Of course he denies that he is intentionally doing any of these things. I think he is still hung up on the ex and I don’t know what to believe anymore. He goes from being sneaky to controlling to telling me that I’m the love of his life. He even got a tattoo of my name on his chest.

Do you think this is a toxic relationship and how do I get out?

This is not a complicated situation, but a person like your boyfriend wants it to feel complicated so that you feel confused enough to stay.

Yes, this is a toxic relationship. He is lying, playing both sides of the game between you and his ex-wife, not contributing to your household, drinking excessively, lying, trying to control you, and not to mention the verbal abuse. Don’t let the empty declarations and the tattoo fool you. (And by the way, from what I’ve seen, the name tattoo is a HUGE RED FLAG — it’s both a kiss of death to the relationship and a warning sign about the one who gets it…but that’s a discussion for another day.)

Oh, also, he has a 2-year-old daughter?! Kids model much of their future relationship behavior from what they see their parents do. Think about that for a minute. When you look at that little girl, is your relationship what you want her to think a relationship is? There may well be a damn good reason that his ex-wife got out and warned you by informing you of the inappropriate texts. Let’s hope that is the case.

Now, how do you get out? You just do it. Break up with him and don’t look back. I know it seems hard, because he’s made everything foggy with peppering in his declarations of love, but you will be so grateful you did when you are on the other side of this, out of the fog. What he’s doing is a form of gaslighting; disorienting you enough so that you don’t even know which way is out. To help you get out, I have a few suggestions:

Tell anyone/everyone you trust — parents, siblings, friends about the cold hard facts of your relationship: he is verbally and emotionally abusive, he drinks excessively, lies, steals, etc. Telling people in your life about him makes it real, makes it clearer, and holds you accountable for facing the situation.

I have seen people gain so much from 12-step meetings like CoDA and Al-Anon. You can find out more information from their websites, including a directory to meetings and resources in your area.

Lastly, seek out some therapy. Going through this with the guidance of a therapist will make it a smoother process. If you don’t know where to start, there are many online resources, such as Network Therapy. Whether you need to find a therapist that takes your insurance or you need a therapist that accepts low cost/sliding scale patients, trust me, they’re out there.

The bottom line is that you will need support. Allow it to come from multiple sources. It will make this a lot easier. Will it still be painful and suck for a while? Yes. But, I promise you that once you are out of this, it will be worth it to do the work on yourself. That way, you’ll not find yourself in another toxic relationship later on.

If you have a question for me about friendships, flirting, relationships, breakups, equestrian competitions, '90s trivia, or anything at all, email me at rarelywrongerin@gmail.com. As always, your anonymity is golden. xoxo

If you like this article, please share it! Your clicks keep us alive!
Tags
Ask Erin
love advice
toxic relationships