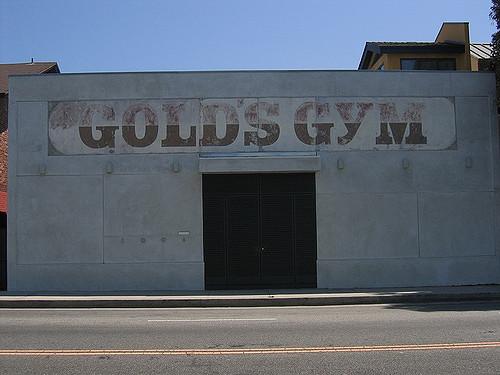 "While there are tons of fathletes, fat people are often excluded from the fitness world — especially when it comes to working in the fitness industry." Image: flickr.com

Using the corporate logo, a Gold's Gym franchise in Egypt posted a picture of a pear with the caption "This is no shape for a girl" to their Facebook page. There was an immediate backlash, which led to a bizarre non-apology apology that looks like it was written by Donald Trump's full time "Apologizing for Stunningly Offensive Stuff" Team:

our apology, this post was not meant to offend anyone, and not against god's creation, or any type of women's body, it was meant to refer to a Healthy Fit body and cutting fats, NOT THE ACTUAL STRUCTURE OF THE BODY.
So Again our Apology. for all the women out there.

Now, it’s possible that English is not the first language of the person who wrote this, and I’m not addressing syntax or grammar.

What I am concerned with is sexism and an extreme level of fucked-up-edness.

If we are going to compare women's bodies to fruit, can we at least be clear that there are many women who are shaped like pears and there is nothing wrong with that?

Seriously. They are, ostensibly, a gym filled with fitness professionals, so one would expect them to know that “healthy fit bodies” and “cutting fat” will not make all women look like whatever fruit they think it is better for a women to look like than a pear.

But, really — can we, for the love of all that's holy and unholy, stop comparing women's bodies to fruit in the first place?

I would say we should stop comparing all bodies to fruit, but you'll note that there is no mention of men here (and also no mention of non-binary people, which is shitty because of the constant exclusion of these folks, but on the other hand perhaps it's better not to be dragged into this particular mess.)

Based on this picture, either it's only ok to compare women's bodies to fruit, or it's ok for men to be shaped like pears. Either way, this reeks of sexism and policing women's bodies.

And the “apology”? Let’s take a minute to break it down, shall we?

Our apology, this post was not meant to offend anyone

Can we just stop these non-apology apologies? It doesn’t matter if it was intend to offend, because it was offensive. I find that when people are really sorry, they say something like, “I fucked up, I’m sorry, and I’ll do better moving forward.” Maybe try that?

and not against god's creation, or any type of women's body

Maybe it’s just me, but it’s tough to believe that an ad with the caption “This is no shape for a girl” wasn’t “against any type of women’s body.” It doesn't matter why our bodies are the shape that they are, fitness companies should not try to profit off of the policing and shaming of them, period.

it was meant to refer to a Healthy Fit body and cutting fats, NOT THE ACTUAL STRUCTURE OF THE BODY

They posted a picture of a fruit that is often used to represent the shape of women’s bodies, they added a caption that said “This is no shape for a girl,” and now they want us to believe that this was about health and fat grams and “NOT THE ACTUAL STRUCTURE OF THE BODY”?

So not only do they think women need them to tell us what our body shape should be, but they also think that we are utterly devoid of reading comprehension skills? Or do they think that we won’t be able to see past all those capital letters to read the original text?

Unfortunately, while there are tons of fathletes, fat people are often excluded from the fitness world — especially when it comes to working in the fitness industry. This happens because, instead of realizing that athletes and fitness experts come in all sizes, fitness centers simply rely on stereotypes.

Not only does this mean that fat people who work out at these gyms rarely have positive role models and instructors who look like them, but it also means that gyms publish ridiculous shit like this because there is nobody working there to point out how absolutely terrible it is.

So, of course it isn't until they put it out into the world that it gets thoroughly smacked down, and of course they proceed to issue an apology that is almost equally terrible — because it is put together by the same people who didn't understand the problem with the ad in the first place.

The website listed on the Facebook page isn’t currently working, which has led several people to suggest that this isn’t even a real gym, just a troll account that uses the Gold’s Gym name to publish fatphobic memes (this pear-based travesty is far from the only picture of its kind on their site).

If wishing made it so… unfortunately, it appears to be all too real, with information here on the official Gold’s Gym Egypt website.

Here’s the good news: all of our protests reached Corporate, who are taking real action:

Words cannot express how shocked and appalled we were by the recent posts of Gold’s Gym Dreamland, a sub-franchise in Cairo, Egypt. Not only were they offensive and disgusting, they go against everything we believe in and stand for. For years we have been dedicated to helping people feel empowered by fitness, not intimidated or ashamed by it. We believe that strength comes in many forms… be it physical, mental or emotional… and that our purpose (and rallying cry) is to help people Know Their Own Strength.

Upon learning of this sub-franchisee’s insensitive posts, we immediately took action by working with Facebook to have their page removed. Also, after consultation with our master franchise in Gold’s Gym Egypt, we are in the process of expediting the termination of this sub-franchisee’s agreement. This incident only confirms that Gold’s Gym Dreamland does not uphold the values and inclusiveness that Gold’s Gym promotes throughout our global network.

With all of this said, we sincerely apologize for these posts. Even though they were created and posted without our knowledge, they were associated with our logo and there’s no excuse for that. We are currently reviewing our internal procedures for how both domestic and international franchisees create and share social media posts so that nothing like this ever happens again.

More importantly, to our members, fans, team members and franchisees around the world, we share your anger. We are mothers, sisters & daughters too and this is unacceptable. We understand that as a brand with a presence in 30 countries, we have a responsibility to spread a message of empowerment. To let people know that no matter where you live or who you are, fitness should make you feel strong in every way possible.

We hope everyone will also take just a moment to see what Gold’s Gym is really all about. You can simply visit our website or Facebook page to see our official campaign, which features incredible people of all shapes and sizes from around the world using determination, passion and inner strength to achieve incredible things.

Yours in Health & Fitness,

So the morals of today’s story are that body shaming is wrong and shouldn’t ever happen, and that activism makes a difference!

If you like this article, please share it! Your clicks keep us alive!
Tags
fatphobia
fitness
gold's gym
Gym
health
health at any size
activism
fat activism