I'm Falling Off A Cliff, And Other Back-To-School Nightmares 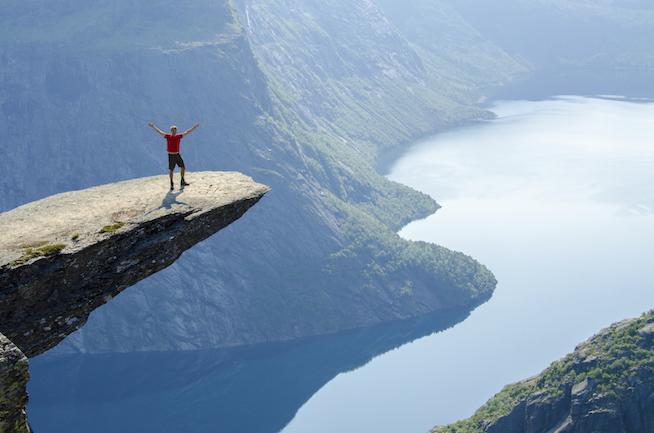 When I'm not naked and falling off a cliff, I'm performing in front of an audience, and it's a complete disaster.

“I dreamt I was going to be in a play, so I was practicing reading the script, but I didn’t know what part I had until the next day. Then I found out I was in scene nine, which is at the very end of the play. I was the Water Fairy Queen, and I ride onstage in my chariot pulled by tiny horses, and I find a glass the main male character had left out. I wondered what you could do with this chalice, and I was thinking about filling it with the laughter of a hundred fairies, and then you could pour it over the heads of sleeping babes, but then I drop it on stage and it splashes on me, and I fall asleep in front of the audience and ruined the play.”

Such is the nature of parenting, especially during back-to-school time.

The biggest problem I am having, at least this week, is being able to console myself in moments of panic, due to the fact that so many schools start at different dates.

When I was in school, we always started after Labor Day. When I first started homeschooling, it was also around Labor Day. Then, some higher-ups decided to start school before Labor Day, and from there, the date kept getting pushed back until school was starting in the middle of August. Then we moved again, and the first day of school is now kind of after Labor Day, except some classes began before Labor Day.

WTH, guys. Why can't we all just get along?

Last week I found myself laying in bed, and suddenly terrified that school started in the morning, and I didn’t have anything ready!

Sitting at the kitchen table reading emails, when suddenly I am terrified that school started this morning and I don’t have anything ready!

Walking peacefully throughout my house, when suddenly terrified that school actually started last week and I totally blew it!

I swear, the amount of unnecessary turmoil I put on myself is ridiculous. Normally, I don’t advocate drinking before noon, but this shit is getting out of control. I am SO STRESSED guys.

The sucky thing is that simply knowing that everything is fine, and I have All The Dates on the calendar, and I already set up reminders on Google Calendar to make sure I don’t miss out on freaking important dates for my kids, won’t change the amount of anxiety I have over school. So much anxiety.

I remember when I was a student, being worried about things like my outfits, or whether or not I should wear a hat on the first day of school.

Now, I am petrified that I will oversleep and get my kids to school after 10. Or no one will find their shoes in the morning. Or that school already started, and we missed the whole “first day of school” altogether, and instead we are going to be celebrating the “100th day of school” any day now.

See me next week, after school started, and we can talk about performance anxiety with the PTA.

If you like this article, please share it! Your clicks keep us alive!
Tags
back-to-school
anxiety
parenting