Reflections Of A Black Female Scholar: I Know What It Feels Like To Be Invisible 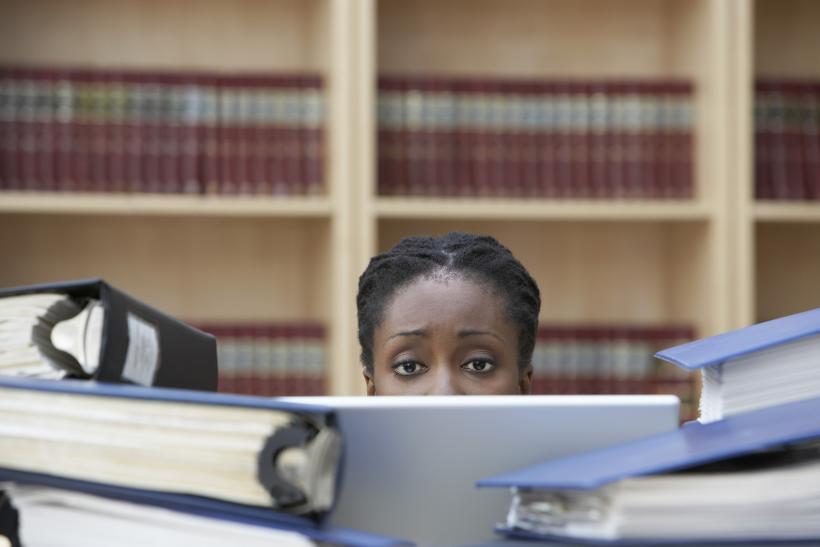 She couldn’t see me as the leader of the class and couldn’t recognize me as a professional equal.

If you can’t see us, you don’t have to engage with us or with our perspectives.

[An] insurance commercial [from 2015] shows comedian Mindy Kaling embracing what it means to be invisible: As Kaling walks down the grocery aisle messily eating ice cream, she uses her “cloak” of invisibility to feel up the muscles of a handsome basketball player.

Kaling, who is of South Asian descent, successfully makes the point of how people look through her, until the punchline arrives: Nationwide Insurance sees her and will take care of her.

As a black female academic, I know only too well what it feels like to have people look right though you. Let me give one instance — from just a few weeks ago, when I felt unrecognized for who I am.

I approached the podium of the lecture hall at the university at which I am a tenured professor. It was the first day of class and the instructor of the previous course was still around, talking informally with her students. Looking around the podium, I noticed that the classroom was not equipped with a computer.

I asked my colleague, whom I did not know, if there was a computer hidden in the cabinet. She proceeded to instruct me: “Faculty are provided computers, they bring their computers, and use a dongle to project on the screen.”

Her words told me she didn’t recognize me as faculty; she did not see me as professor.

So, I responded: “This faculty was provided a computer, which she has brought. This faculty has not taught in a classroom that is not equipped with a computer before today.”

Without missing a beat, she said, “When the professor arrives, she’ll have the right set up. Are you the teaching assistant?” “I’m the professor,” I told her emphatically. She gave me a confused and befuddled look, before saying “Oh.”

What’s the point of this anecdotal evidence, and does it have anything to do with race and gender? I bring this up to illustrate a larger problem which is a huge topic of conversation among black academics and other professionals across the country.

Actor David Oyelowo expressed a larger sentiment, when analyzing the “Selma” Oscar snub (in which only the film’s song won an award but its director and actors were not even nominated) recently, he said:

“We, as black people, have been celebrated more for when we are subservient; when we are not being leaders or kings or being in the center of our own narrative, driving it forward.”

Let me first put things in perspective: A recent American Association of University Professors (AAUP) study shows that around 25 percent of professors at doctoral degree granting universities are women.

However, according to the Journal of Blacks in Higher Education, at that same level of research institution, African Americans make up less than 5 percent of faculty and fewer than half of those professors are women.

The small number of African-American women academics makes us mostly invisible: If you can’t see us, you don’t have to engage with us or with our perspectives.

Such episodes have longer term consequences

While episodes of “misrecognition,” as the one that I experienced, may seem harmless, they are actually not so. Psychologists call them acts of “micro aggression.”

Micro aggression is the name given to behaviors that are a result of biases against marginalized groups. Such behaviors often leave people feeling uncomfortable or insulted.

One study states that “micro aggressions result in high degrees of stress for blacks because of denigrating messages: ‘You do not belong,’ ‘You are abnormal,’ ‘You are intellectually inferior,’ ‘You cannot be trusted,’ and ‘You are all the same.’"

The authors conclude that “feelings of powerlessness, invisibility, forced compliance and loss of integrity, as well as pressure to represent one’s group are some of the consequences.”

My colleague’s refusal to “see” me smacked of racial bias, conveyed through an act of micro aggression. My physical package as a middle-aged, professionally dressed black woman did not correspond with her idea of what a professor looks like.

She couldn’t see me as the leader of the class and couldn’t recognize me as a professional equal.

With a few short sentences, and, I assume, without malice, that colleague dismissed my experience, education, and training at the same time that she undermined my authority in front of 60 students.

Ignorance is not an excuse

Often such incidents get attributed to a youthful appearance. Upon hearing the story, my husband tried to point out how the “confusion” happened. Generally a pessimist, he is forever an optimist when it comes to matters of race — likely due to his own Anglo-Saxon background.

“Sweetie, you referred to yourself in the third person rather than in the first person,” he reasoned. “You confused her. Besides,” he continued, “you look young.” “Maybe you should take it as a compliment,” he suggested.

The course’s teaching assistant, having watched the entire episode, expressed somewhat similar sentiments. “That happens to me all the time,” she said and suggested her Latina background and youthful appearance, as an explanation.

That I was “misrecognized” might be a function of my outfit and my youthful appearance, she ventured.

I understand that none of us — neither Oyelowo, the Latina graduate student, nor I — is the victim of lynching or Jim Crow-era discrimination. Oyelowo starred in a well-received movie in a lead role.

My colleague was astute enough to see I was part of the university community, albeit as a graduate student rather than as tenured faculty. There was no harm done, and there was no foul play. Right?

The consequences of such micro aggressions add up: They equal “death by a thousand cuts,” as one colleague calls them. They result in diminished mental and physical well-being, and they are shown to “increase the risk of stress, depression, the common cold, hypertension, cardiovascular disease, breast cancer, and mortality.”

What in academic language is called micro aggression, is, in fact, experienced as “aggression.” This aggressive tendency comes from a shared experience among dominant white culture, namely, a refusal to see the import and impact of racism, as described by Jessica Nelson, Glenn Adams and Phia S Salter, researchers at the University of Kansas and Texas A&M University.

“Although popular and scientific understandings tend to portray ignorance as a lack of knowledge,” the researchers say, “this work emphasizes that ignorance itself is a form of knowledge that makes it possible to ignore or remain unaware of things that might otherwise be obvious.”

As with the law, ignorance is no excuse. Not then. Not now. Not ever.

Reflections Of A Black Female Scholar: I Know What It Feels Like To Be Invisible
Cherise Smith