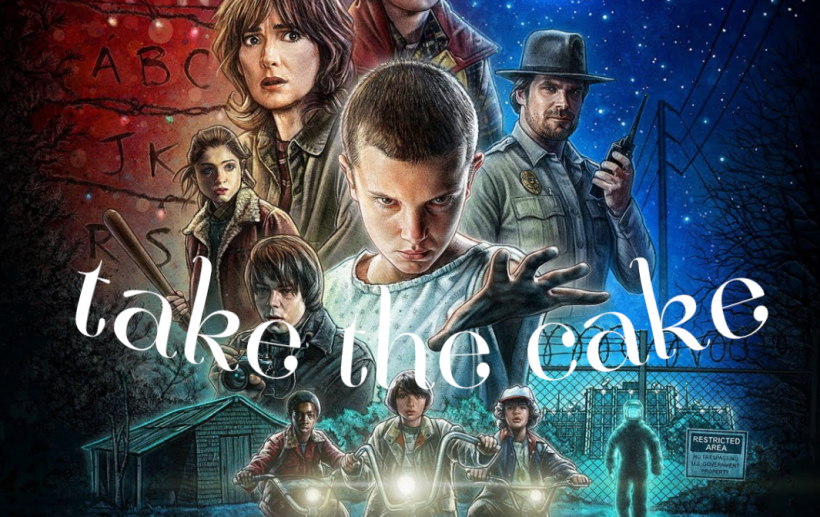 Barb plays the fat girl sidekick (often referred to as "Fat Girl 1" in the credits of '80s films about teenagers) in the new Netflix show Stranger Things, which has been the object of my binge-lust lately.

I was excited to see that Winona was back in my life after her shoplifting phase, throughout which I remained an ardent fan.

Thankfully, my childhood is now far enough in the past that it is the landscape of period-based dramas. When I saw that the show featured children + alien monsters I really thought they were going to pull a Mysterious Skin but, no, they stayed the monster course. It does feel like the show hearkens back to the '80s kidnapping craze that spurned the "Stranger Danger™" era.

But let’s get to the point of this article: fat babe Barb and her untimely retirement from the show.

Like many, the first time I saw Barb in Episode One, I was like, "YES, a fat girl with ahead-of-her-time style. I can’t wait to watch her quippy humor and oversized glasses overshadow everyone!"

But then I remembered that I live in America in 2016, and that Barb had literally like a 6% chance of survival in a horror show.

Barb disappears in like Episode One, snatched by the "Stranger" after Nancy tells her to go home so she can consummate her new-found privilege by having sex with Steve after an intimate gathering of the popular kids.

And as Nancy begins her walk upstairs to Steve’s bedroom (the stairs are symbolic of Nancy’s choice to socially ascend), Barb reminds her "this isn't you" and asks her to show an act of solidarity. Nancy refuses, rejecting Barb's request for friendship in favor of heteronormativity.

Barb expressed reluctance because she knew the popular kids were fuckin' sociopaths, and it was Nancy who gas-lit her by persuading her to let her guard down and then LEFT HER when shit got real.

Barb leaves the house and ends up back in the backyard where the party happened. The Stranger is ultimately able to find Barb because she cut her hand after improperly puncturing a can of beer, which Nancy peer pressured her to shotgun at the party.

Barb is sitting on the diving board, alone, cut, and crying when the Stranger finds her because it can smell her blood. Barb doesn't reappear until nearly the end when, surprise, it turns out she is totally dead.

Barb didn't even want to go to this party! Nancy pressured her to go so that she could abate her own self-consciousness — a gesture she refused to reciprocate when Barb made the same request.

Barb expressed reluctance because she knew the popular kids were fuckin' sociopaths, and it was Nancy who gas-lit her by persuading her to let her guard down and then LEFT HER when shit got real.

Barb didn't want to shotgun a stupid beer — an act of insipid faux-rebellion promoted by privileged kids who don't have to deal with consequences. It was Nancy who leveraged their friendship to demand the act of complicity that ultimately killed Barb.

Stranger Danger isn't the only thing that felt familiar about this show.

Their friendship mirrors a power dynamic I know well. Growing up, I had friendships like the one between Barb and Nancy. There were many instances where my thin friends would encourage me to enter situations I knew to be emotionally unsafe from past experience, telling me that I was being unfair or judgmental. When things ultimately did take a turn toward the fatphobia I knew all too well, I was either blamed for being "too sensitive" or abandoned outright.

It was Nancy's thin privilege that obscured her ability to see what Barb saw in the Popular Kids, to make the social leap that Barb couldn't, and that led her to ultimately symbolically (and actually) leave behind their friendship when a more normative offer presented itself.

Sex with Steve represents the transaction that places Nancy firmly on the other side of the privilege line. In the show, sex represents an act of patriarchal claiming by Steve, and even after Steve publicly slut-shames Nancy, she still manages to find their relationship a worthwhile pursuit.

We find this out in the final scene of the final episode when we see a Christmas-sweater-bedecked Steve, alongside Nancy's parents, with his arm around a placid Nancy, the monster having been vanquished. This scene represents their graduation into adulthood, which is tantamount to domesticity.

Barb's absence from this scene is no accident.

In my erotic-friend-fiction version of Stranger Things, Barb and Jonathan get together, decide to leave all the basic people behind in the monster hell they have created for themselves through their willful ignorance, and have a 1000-hour Barb-focused sex-and-hotdog-eating binge.

In conclusion, to all the Barbs out there, don't let your friend Nancy get you killed, boo. To all the Nancys out there, look out for your fat friend Barb, because she’s fucking amazing and precious.