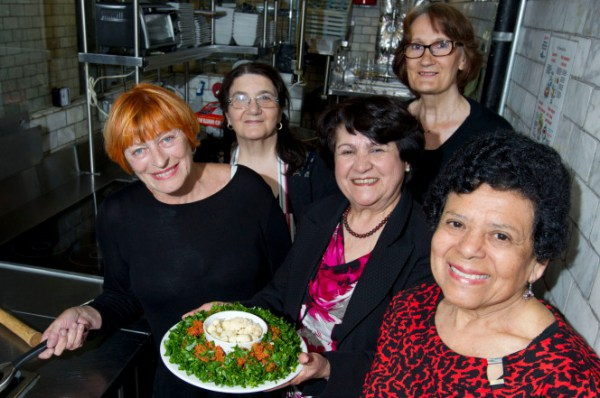 These brave warriors say "hell no" to racism, sexism, bigotry, and xenophobia. These men, women, and children are saying "heck yes" to equality, human decency, and love. From bold acts of advocacy to simple moments of goodness, these everyday people remind us of what it truly means to be American.
These lovers and fighters are resistant in the face of intolerance. They are bold in the presence of judgment. They are determined to join forces (or to stand proudly alone) to ensure their message is heard: #LoveTrumpsHate.
♦♦♦
Sometimes it’s the little things that count, especially when each small act or message becomes part of a collective chorus. The fact is, both positive and negative messages gain power in numbers but, here at Ravishly, we hope to build strength from the positive and this week we are shining a spotlight on a little restaurant called Enoteca Maria in Staten Island, New York. There you’ll find, and taste, a clear message of appreciation for diversity and the goodness that comes when we embrace it.
Enoteca Maria owner, Jody Scaravella, has a great respect for the roles that grandmothers hold in our society. His own grandmother played an integral part in his upbringing. Born and raised in Brooklyn, by two hardworking parents, Jody spent much time alongside his nonna and, as Jody describes: “She is the one who passed down to us her culture with, at its very heart, her culinary traditions.”
When Scaravella first opened up the doors, to his Staten Island eatery, the idea was to serve food prepared by Italian nonnas with an acknowledgement that each woman in that kitchen brings to her cuisine a part of her own culture and family history.
A precious concept, indeed.
Scaravella described the cultural significance of having grandmothers as chefs, in a NowThis video. “Every time you have one of these grandmothers in the kitchen, you have a thousand years of culture coming out of their fingertips.” The idea of embracing the collective voice of history and culture is one that Scarvella decided to expand upon and share on a more international scale.
In 2011, Scarvella began working on a virtual cookbook called, “Nonnas of the World.” The format allows online users to access, and add to, the cookbook. Anyone, from any part of the world, can share their grandmother’s name, a brief bio, some photos, and a recipe.
They can do this in their own language, though there's a translator option, as well. Scarvella’s idea is that this collection of old recipes will become, “the most extensive collection of grandmothers’ recipes, their particular Dialect and memories, a testament to culinary culture of common people all over the world.”
This past July, Jody took this multicultural concept even further by bringing international cuisine, and the nonnas who specialize in it, to his restaurant. Now, nonnas from around the world have been welcomed into the kitchen at Enoteca Maria. You’ll find Peruvian, Siberian, Syrian, Greek, Bangladeshi, and Sri Lankan nonnas. You’ll find German, Japanese, Nigerian, and Bulgarian nonnas, too. Each woman shares her specialty dishes and, along with them, a part of her own culture and family history.
Enoteca Maria is truly a place where cultures are celebrated through cuisine. And a recent project, launched by the restaurant, takes this celebration to another level by offering non-chefs an opportunity to learn from the restaurant’s nonnas.
They offer free training sessions, hosted by the nonnas. These training sessions give people a hands-on opportunity to experience culture and cuisine up close. The project is called "Nonnas in Training" and the aim is to “keep alive the passing down of technique and knowledge from one generation to another, and from one culture to another.” New Yorkers have embraced the concept and, not surprisingly, there is a significant waiting list to take part.
A wise primary school principal once said: “When we embrace diversity we grow stronger and wiser together.” His message has been with me ever since. I hear it in words and I see it in the actions of everyday people. And this week, those people are the owner and the nonnas of Enoteca Maria. That is why they have been chosen as Ravishly’s inspirational Lovers & Fighters of America.
If you like this article, please share it! Your clicks keep us alive!
Tags
Lovers & Fighters
#LoveTrumpsHate
Love
kindness
Food
Recipes
italian
grandmothers
tradition