I'm Fat-Shaming My Cat And It Needs To Stop 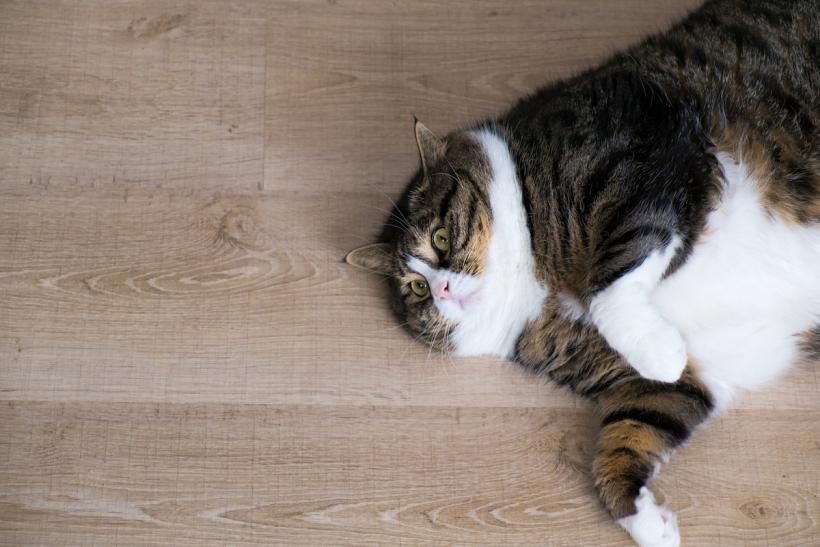 No, I’m not a complete asshole, Allie is my cat.

I’ve been saying these fatphobic things to her for a while, but only recently realized that when I fat-shame her, I’m fat-shaming myself.

I try to be body-positive but buried deep inside me are the fatphobic messages I’ve been getting for most of my life. Transferring these feelings of unworthiness and imperfection to my cat isn’t a healthy way to handle it, especially since fat cats are cool.

Fat cats are considered cute, cuddly, and beautiful — and yet, fat women are thought of as the opposite of all that.

Allie doesn’t understand me when I call her fat or tell her to lose weight. Although she’s a very talented kitty who kills it at competitive sleeping and tongue-to-cheek dermabrasion, she can’t translate English into her native tongue of Meow.

Like most people, I prefer my cats chunky, and seeing Allie’s chubby body doesn’t enrage me; it makes me happy. When I see a fat cat (and I’m not talking about the ginormous meme kind), they look healthier and more attractive to me. It’s just more fun to pet an animal who isn’t all skin and bones. I’ve had model-thin cats and petting them creeped me out; I hated feeling their back vertebrae as I petted them.

Fat cats are considered cute, cuddly, and beautiful — and yet, fat women are thought of as the opposite of all that.

The truth is, we want our cats fat and our women skinny.

I admire how Allie stretches out with her whole body and luxuriates in simply being comfortable in her own skin. She isn’t concerned with hiding her chubby body or being judged for it.

My mother is extremely critical of the way women look, and she made it clear to me at a very early age that a woman could do many things to make herself more attractive — get a flattering haircut or dressing well — but there wasn’t anything thing she could do if she was overweight. Having extra weight was a deal breaker.

We were always on a diet at our house and there was never any kind of snack food available. I’ve never been a fan of any kind of diet that promised you a wonderful life, but only after you had lost the weight. I felt as if I was in a constant holding pattern, waiting for that day when I would be considered skinny enough for happiness.

When I went away to summer camp (no, not fat camp — that was the next summer), my mother wrote to me that I should use the summer to get some lard (her actual words) off.

Hey, forget about having fun and making friends, just focus on how imperfect you are and how it’s difficult for me to love you when you gain weight.

My mother may have been fault-finding in humans but she loved our cats as they were, and always made sure to give them special treats including tasty morsels from her own plate.

Let your cats be fluffy, just not your family.

I get it, it’s not as if our pets have any discipline or power. We don’t blame them for the things they can’t control. We love them no matter what they look like, so why can’t we do that with people too? Why are heavier people judged so harshly or just seen as the comic relief?

Most of the time when I’ve witnessed fat-bias or experienced it myself, I’ve accepted it as the status quo. When I went on the Pirates of the Caribbean ride for the first time as a teenager, there were a few sections that were blatantly fatphobic and, dare I say, rapey — both made me feel uncomfortable. The part of the ride that was the worst was the section where the pirates chase the women of the village that they’re in the process of pillaging.  All the women are being pursued except for one fat woman, who is the chaser, not the prey, as if to say that no one — not even a toothless, dirty pirate would want a fat woman.

At some point, the good people at Disneyland realized the rape culture-y aspect of the ride and changed it so that the women were carrying platters of food and that was the reason that the pirates were chasing them. The pirates weren’t rapists, they were just hungry! Of course, the fat woman continued to chase the pirate, because everybody knows fat people have no self-control when food is involved.

I never told anybody how worthless the ride made me feel because I thought I would just be accused of being oversensitive, so I pretended it didn’t bother me. I was very happy when they took that part of the ride out altogether. However, they did leave the section of the ride where no one will bid on the fat woman in the bride auction—which again is wrong on several different levels.

Where’s the ride that’s set in the time when heavier women were thought of as desirable, healthy, and prosperous. You know, like the women in the paintings of Peter Paul Rubens? "Mr. Ruben’s Rubenesque Ride," maybe?

Decades later, I still live in a fatphobic world where it’s okay to make fun of fat people and it’s difficult for people to see the beauty in every body shape.

One of the most painful times that I’ve ever personally been fat-shamed happened at a trendy Los Angeles restaurant when I went out to breakfast with friends. Breakfast is a tricky meal for me because I don’t eat eggs, so I usually have to mix and match for my meal. My friend asked me what I was going to order, and I said, “Toast, a fruit bowl, and maybe some fried potatoes.” The word potatoes had barely left my mouth when a woman I didn’t know looked at me with obvious horror, grabbed the menu out of my hands, and shrieked, “Don’t you dare order potatoes. Wouldn’t you rather get something healthier like an egg-white omelet or a tofu scramble?”

I felt humiliated, disgusted, and angry — but again, I didn’t say anything. I pushed my feelings down. I shut her out when she continued to try to talk to me as if her fat-shaming me was a bond we now shared.

Hey, breakfast police, I’m allowed to order anything I want and I don’t need you to validate my choices.

I remember these times as I look up at my beautiful cat and her all-grey, more-to-love body. I want her to be healthy, and she is, I just need to be able to see past my own fat-bias to see not only her beauty but my own.

Once I became aware of my fat-shaming actions, it helped me to see that all that body negativity was hurtful, even if it was supposedly aimed at my cat. So, when those voices tell me that I’m not okay, I’m going to work on replacing them with affirmations and love. I’m going to follow my curvy kitty’s example and learn to indulge my body by napping, stretching out on the bed, and demanding a cuddle or a squeeze whenever I need it.

I don’t live in a house of dieting anymore, and in my house, bigger cats and bigger people are valued.

If you like this article, please share it! Your clicks keep us alive!
Tags
fat shaming
fatphobia
body positivity
diets
dieting
#DitchTheDiet2017