I Feared Anti-Depressants Would Trigger My Eating Disorder, So I Tried Acupuncture Instead 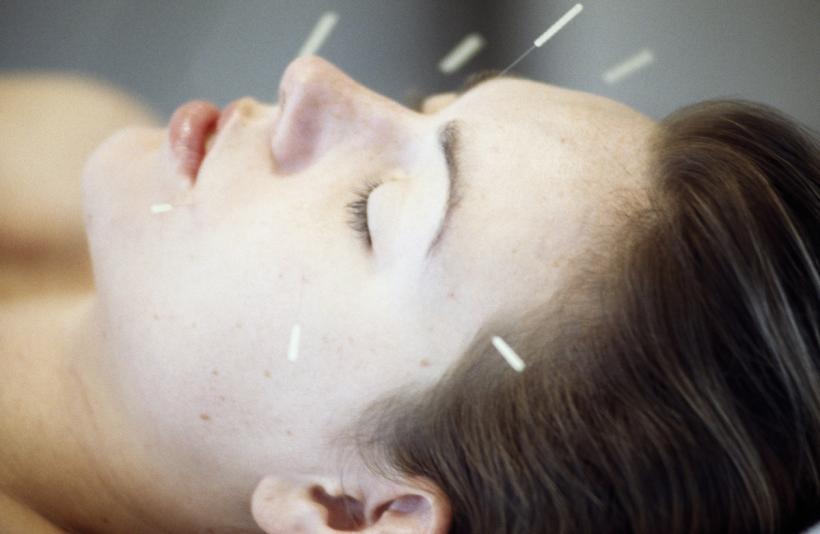 All I know is that having someone poke tiny holes in my skin is really effective at helping me manage my depression and anxiety.

Like 7.5 million other Americans, I have depression with a side of anxiety disorder. But I was scared to follow the traditional treatment plan of adding an anti-depressant to my breakfast, so I decided to try treating my conditions with acupuncture instead.

I’m not against medications. In fact, I take them daily. I’m in premature menopause, so a nightly dose of birth control acts as my hormone replacement. And I take an anti-seizure medication every day to help manage my migraines. I think of my depression and anxiety disorders in the same way, as biological illnesses I was born with that aren’t my fault. But still, the thought of taking an anti-depressant to treat these conditions makes me nervous. It’s not that I worry about what someone would say if they knew I was taking mental health medications.

My fear in taking an anti-depressant stems from my concerns that medication might help my mood issues but trigger my eating disorder.

I’ve struggled with disordered eating since middle school when I started purging after meals hoping to shed my label as the girl with the pretty face but a chubby body. It worked, but between restricting, purging and a bunch of other unhealthy food habits I’ve done a lot of damage to my body over the years. With a lot of hard work and the help of a great therapist, I’ve finally gotten to the point where I can see a package of cookies without breaking into an anxious sweat. Food no longer controls my life or determines my happiness, and I’d like to keep it that way.

When I admitted to my therapist that I was having trouble finding a reason to wake up in the morning — that the mere act of letting one of my preschoolers go into their bedroom to grab a toy was making me think of 97 different ways they could die while in there alone — we both agreed my usual cognitive behavioral therapy techniques just weren’t cutting it anymore. I needed something more to try and get my depression and anxiety under control. But she also told me in no uncertain terms that taking an antidepressant would likely have the side effect of causing me to gain weight.

It’s empowering to get help for your issues. But mental health is complicated, and treating depression and anxiety isn’t a “one-size-fits-all” situation.

Not bursting into tears over nothing anymore sounded great, but I know myself well enough to realize that even the chance of gaining weight from medication is enough to trigger a relapse into unhealthy food habits. I knew I needed to get help. However, taking a pill that could treat my anxiety and depression but trigger my eating disorder would only be trading one problem for another. So I started to look around for an alternative solution.

I’m not really a “woo” person. One of the biggest fights I’ve ever had with my best friend was when she told me she was treating her son’s fever with diffused essential oils instead of Tylenol. Until just last week I thought a salt lamp was something fancy chefs used for seasoning fish. But I read that acupuncture can be effective for managing anxiety and depression, and since my insurance covered 12 sessions a year (Thanks, Obama), I figured it was worth the cost of the co-pay to give it a try.

Even though I walked into the sage-scented office an admitted skeptic, I saw a drastic improvement in my mood after starting acupuncture.

I don’t know if it’s because I’ve secretly got a little 50 Shades in me and I like the tingly prick of the needles, or if there really is something to Eastern medicine. All I know is that having someone poke tiny holes in my skin is really effective at helping me manage my depression and anxiety. My acupuncturist says it’s because the needles are placed in specific places to channel your inner energies correctly, and mine are naturally all mixed up. I don’t entirely buy into it. But I’ll admit it works for me.

After a session, I feel a little giddy, like the high that comes with getting a tattoo or eating an entire bag of gummy bears in one sitting. I’m calmer, and I can think about the things that usually cause me to panic for a few minutes before I start to feel that tightening sensation creep across my chest. I can listen to the radio without crying. I want to get out bed in the morning (unless it’s Saturday and then leave me the hell alone until at least 7). When it’s been a week or longer between sessions I can feel the disquiet rising. Getting dressed starts to feel like an impossible task and I start coming up with excuses not to shower. That’s when I know it’s time to schedule another appointment.

Acupuncture seems like a spa treatment, with its soft lighting, cloth covered table, and sleepy music. It sounds like something a rich bitch does for fun, “When I was at acupuncture…” But it’s hard work. It’s not easy to find an hour to myself to go for a session. And once all the needles are in place, I have to stay still and just lay there for what’s only half an hour but feels like forever. I’m alone, deprived of my phone and forced to breathe through whatever anxious thoughts pop into my head and try to upset me.

I know swallowing a pill and letting the chemicals do their thing would be a faster, easier and perhaps even a more affordable solution. But triggering my eating disorder isn’t a risk I’m willing to take.