Working From Home Was Bad For My Relationship 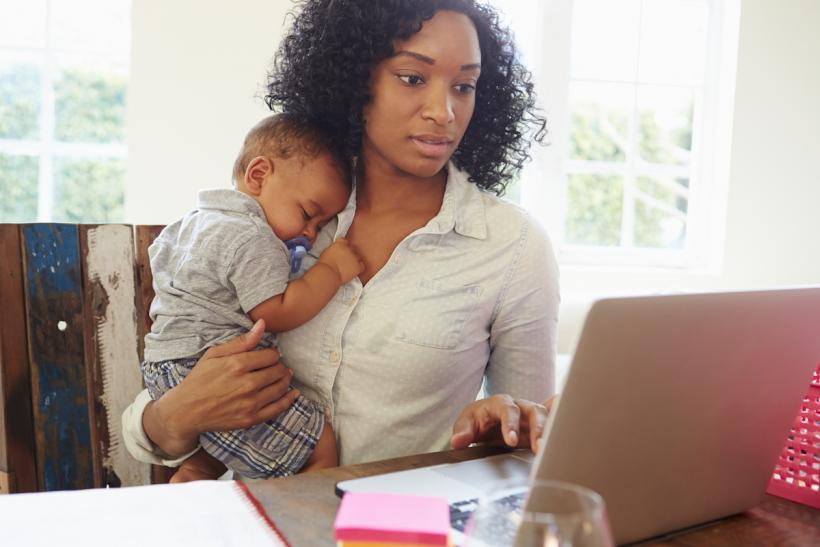 The real problem was that it began to feel less like we worked from home, and more like we lived in the office.

At first, the fact that my partner’s job running a startup and mine as a freelance writer allowed us both to work from home seemed like the peak of idyllic modern parenting. When we had our baby a year ago, I went part-time, which was enough for me to pay half the rent, fitting the majority of my work around our son's naps and in the evenings.

Because my boyfriend was home, instead of the isolation of being a stay-at-home mother, I had another adult around to talk to.

I could take a shower knowing someone was stopping our early walker from climbing onto the table and launching himself backward, and we all ate lunch together. Otherwise, I didn’t actually manage a shower, and I skipped lunch for half-chewed pears and crackers from the baby’s leftovers so that I could catch up on emails or chase pitches. For his part, my boyfriend got to spend far more time with his son than the typical stressed-out commuter who gets home after baby's bedtime.

Our flat is small with an open plan kitchen/dining/living area and the bedroom and nursery off to either side, so there isn’t a separate office. For the early months, it worked perfectly, not least because the baby slept so much of the day, while we worked alongside each other at standing desks fashioned out of the bookshelves. When naptime shrank down to two hours in the morning, my work had to be condensed accordingly. But that wasn't the problem.

The real problem was that it began to feel less like we worked from home, and more like we lived in the office.

In that office, TV or radio wasn't allowed, as neither of us can concentrate on work with background noise. That was great when I was working most of the day, but, once the baby slept less, a soundtrack of one-sided Skype meetings did nothing to inject bounce into my long baby day. I would feel resentful too when my partner took breaks, Pomodoro-style, for five minutes every half hour, and I'd see him on Twitter instead of playing with the baby and giving me a break.

But the worst part was my workload felt like it had doubled to include keeping our son quiet during my boyfriend's calls, especially important meetings — often an impossible task. If the baby wasn’t banging objects together in delight at how much noise he could make, he was practicing his pre-language shouting with the same glee. If I made the baby giggle, the most beautiful sound in the world, it became problematic background noise. Sometimes, I felt like I was working for his company too, in a role with no title or salary, to allow his work to take place. The worst week was when my partner had five webinars to deliver, and we had to actually leave the house to ensure appropriate office conditions — in the rain.

Relationship-wise, our home-working wasn't right for us.

I typically spent the morning in a food-stained bathrobe, first priority being getting the baby up, fed, changed, cleaned, and dressed before it was somehow already time for lunch. I always chose working over getting dressed, so that robe often stayed on past lunchtime. Having my partner there all day, with his back to the room, laughing and joking with other people via Skype, but barely speaking to me wasn’t that adult conversation I thought I was going to have. I found myself unable to resist occasionally commenting on conversations I overheard or interrupting silent typing to ask about lunch, and getting no response made me feel ignored. Our evening communication suffered too, as I'd already heard everything, so there was no catch up at the end of the day.

I've always thought communication is the only thing that matters in a relationship, with spending meaningful time together a close second. We were doing neither, and it became harder and harder to raise the subject because it meant sounding like I didn’t appreciate how much time we spent together as a family.

In the end, what saved us was looking at our situation using a tool from my partner's startup philosophy. In product design, teams work in sprints — short periods (like two weeks) on the project — with evaluation at the end which then feeds into the next sprint. We introduced the idea in relationship terms and picked out one thing to start or stop doing for two weeks.

Working from home was my suggestion for something to stop doing.

Even though my partner was surprised to learn our set up wasn't working for me, the neutral format of the conversation made bringing it up more comfortable. He found some places nearby to work for at least part of the day so wasn’t wasting time commuting, and now that our baby is old enough to go to kindergarten, I sometimes work outside the house too.

Our office has finally turned back into a home again.

If you like this article, please share it! Your clicks keep us alive!
Tags
work at home moms
Relationships
work life balance
working from home

Working From Home Was Bad For My Relationship
Nicola Prentis