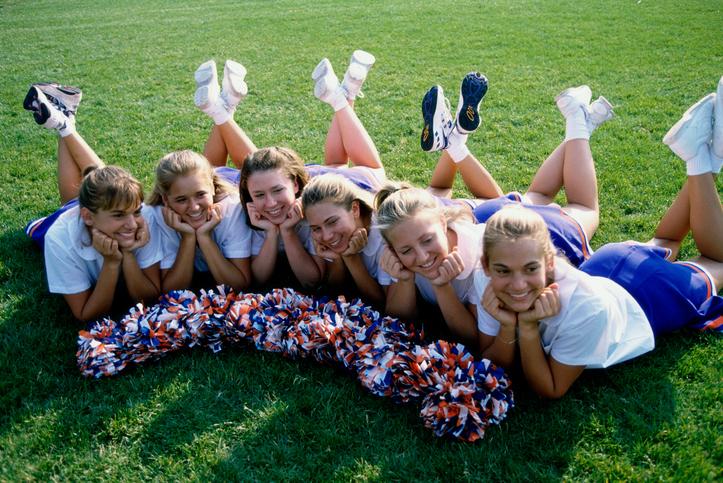 Old photos tell a different story than the one I remember...

Right before I had a baby, two years ago, I was happy (enough) with my weight. I ate what I wanted. I walked a lot. I felt strong. Still, when I would compare my scale weight to that of the generic height/weight indexes found online, it appeared I was dancing near overweight. "Really?," I thought.

Well. Oh well. I wasn’t born to be thin. I’ve always been big. This is alright.

I don’t remember not being scared of my weight, though I do remember how it began. I was a young teen, hanging out with my brothers and the rest of the boys, when one of my cousins started calling me fat. It got such an obvious response that the whole crew joined in. How fabulous it must have been for them to watch their power. It wrecked me. At that point in time, I was around ninety-five pounds.

And so it began. I would wait to eat until I was home. I’d lie and say I wasn’t hungry. I did anything to avoid people from thinking I was human enough to need food.

If they never saw me eat, they couldn’t blame me for what I looked like. That’s how it worked, right?

I used all my savings from a summer’s worth of work and bought a Healthrider — an odd sort of horseriding-like contraption used for becoming super svelte. We lived in a brick trailer, so I put it outside on the sidewalk. I was determined not to be what my cousins thought of me.

High school flew by. I was a cheerleader for the football team. Football weather necessitated more than a traditional cheerleading costume. We had thick sweaters and black polyester pants. I felt safe in them. I was known for wearing baggy clothes to class.

"She’s never smoked a joint but she dresses like a stoner," people would say. I wore skirts with bulky cardigans to dances and never once went sleeveless. I was way too fat not to have sleeves.

One day, my arms came out and saw the sun. I tried to act nonchalant, but inside I was shaken. For one moment, I wasn’t hiding how fat I was. What would happen now? Now that people in the world truly knew?

A habit, once formed, is deceptively hard to break. I’ve had a bathing suit on less than twenty times over the course of my entire life, and there wasn’t a minute in one I didn’t hate myself with every ounce of emotion in my body.

In college, I went to Costa Rica with some friends on spring break. No matter how hot I get, I swore to myself, I will not let my fat arms fly. I will not wear a tank top and I will not roll up my sleeves.

But Costa Rica was sizzling — and we were hiking — and it just sort of happened. One day, my arms came out and saw the sun. I tried to act nonchalant, but inside I was shaken. For one moment, I wasn’t hiding how fat I was. What would happen now? Now that people in the world truly knew? I was oddly comforted by the fact that it happened in another country. The images would never find their way back to my home.

Recently, an old cheerleading friend uploaded old pictures to Facebook. I saw that I had been tagged and tried to avoid looking — to avoid caring and seeing. I had been so fat back then. I didn’t really want to re-live it.

Still, I leaned in, and peered at the girl in the photo, prepared to hate my youth all over again.

I was floored. Instead of feeling relief, I felt angry. I've given up my whole life! I cried inside. What if it wasn’t true? What if my fear of what I looked like wasn’t an indication of the truth?

I have lost so much. I didn’t try to learn how to swim. I’ve avoided sex in the daylight. I have never worn a sleeveless dress without a sweater. I’ve lied to so many people about what I have needed and what I have felt. I’ve lied to myself.

Who can I blame? Who stole all these years from me?

While I’d love to blame my cousins, the truth is, I can only blame me. I put all my stock into the world’s power to judge me.

I wasn’t fat all those years ago. I have never been.

And if I had? Life would have been exactly as it has been. Painful and amazing, filled with challenges and luck, hard-as-balls and beautiful. My size meant so little. How I wish I had known.

So, as I tiptoe to forty, I vow to stop letting the fear of what I look like ruin my life. I have lost so many years, but I am not losing anymore. My life was too short. My life still is.

What If I Was Never 'Fat?'
Kelly Green