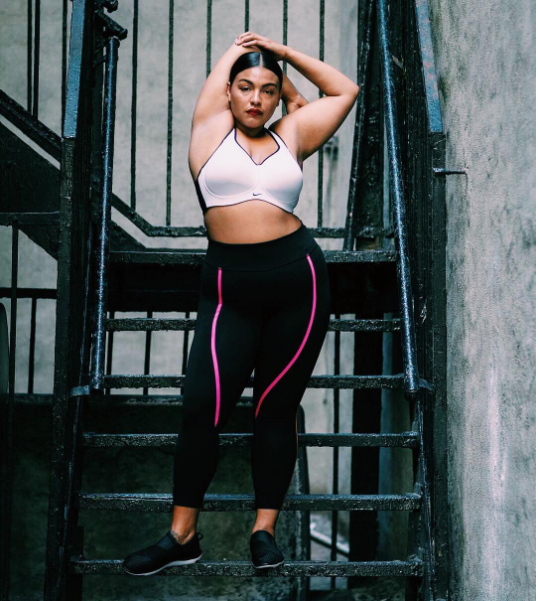 Why are people so scared and angry about Nike offering plus-size fitness wear? (Image Credit: Instagram/trendera)

Nobody, of any size, is obligated to participate in sports/exercise/movement. Participation doesn’t make someone better than those who don’t — running a marathon and having a Netflix marathon are morally equivalent. Still, people of all sizes enjoy participating in sports and physical activity.

Nike makes clothes for sports and physical activity. They figured out that they could make those clothes to fit fat people, and the Nike plus size line was (finally) born. As someone who has been both fat and an athlete for as long as I can remember, I would just like to say — it’s about damn time. To be clear, this line has size limitations. Most items go up to 3x, and the sports bras only go up to a 38. But it’s progress.

Not everyone appreciates it. It makes sense that there would be a backlash from people who still aren’t accommodated by this line, but that’s not who I’m talking about.

I’m talking about people who are actually upset that Nike is creating workout clothes for fat people, and took to the internet to say so.

I’m not even going to point out that the current regime is trying to give us less healthcare for more money, while taking massive amounts of money from poor people and giving it to the uber rich. Yet people find time to bitch that fat people can buy leggings with a Nike Swoosh. *I’m not even going to bring that up.*

When you’re fat and do fitness-y things, you learn pretty quickly that lots of people say (bullshit) lines like “Those fatties need to work out.” But they don’t tell you that the end of that sentence is: “So that I can moo at them from my car while throwing bottles.” I once had a grown ass men scream “YO FAT BITCH!” at me just before throwing eggs from his car. You know… for my health.

If these trolls would prefer that I work out naked, I have no problem with that (except maybe for the chaffing). But somehow, I doubt that would please them either. What they are looking for is a world where fat people live in shame — hiding in our houses, unable to participate in a world that, if they had it their way, wouldn’t accommodate us at all.

So this latest backlash against Nike basically boils down to:

Also trolls: By making clothes for fat people to exercise in, Nike is encouraging obesity.

Apparently trolls: Fat people need to exercise in togas fashioned from their bedsheets.

The idea here isn’t that fat people should have access to workout clothes so that we can lose weight or be healthier or whatever, because fat people’s bodies are not public property, and whether or why we exercise is not anybody’s business. Many fat people participate in movement/sports etc. without any interest in weight loss or health.

“Promoting obesity” is not a real thing. “Wait — Nike is making a small group of styles and colors of their workout clothes in plus sizes? I’m totally getting fat!” said absolutely nobody ever.

The idea that creating a world that accommodates fat people the same way it accommodates thin people somehow promotes fatness would be hilarious if it wasn’t used to hurt so many fat people. A diversity of body sizes has always, and will always, exist. And people all along the spectrum deserve seats that accommodate us, and clothes that fit us and that we like, including but not limited to sweat-wicking capris leggings.

This brings into sharp relief the truth about so much fatphobia — not just by those pathetic enough to become online trolls, but by those who casually drop their fatphobic opinions into comment spaces. It’s not that people care about fat people’s health, it’s not even that they believe we’re costing them money somehow.

Fat is definitely NOT the “last acceptable prejudice,” and anyone who says that needs to take it back. Black people are still being murdered by the police, brown people are being questioned about their citizenship by waiters, Queer people are fighting states trying to take away their Constitutionally-guaranteed and Supreme Court-verified rights, and Trans people are fighting for their right to pee. Sadly for the U.S., a regime has been installed that ran on a campaign of blatant racism, xenophobia, Islamophobia, anti-Semitism, homophobia, transphobia and misogyny. So we’ve got plenty of prejudice, and it’s all way too acceptable.

But shame, stigma, bullying, harassment, and oppression directed at fat people is all too real. And we live in a world where there is endless space made to talk badly about fat bodies, and where any attempt to create a fat positive space is overrun by people insisting that fat people not have a moment’s peace from the message that our bodies are bad and the world would be better if we looked different, or didn’t exist, or, you know, didn’t have clothes to wear.

If these trolls would prefer that I work out naked, I have no problem with that (except maybe for the chaffing). But somehow, I doubt that would please them either. What they are looking for is a world where fat people live in shame — hiding in our houses, unable to participate in a world that, if they had it their way, wouldn’t accommodate us at all. They want fat people to be nothing more than punching bags living behind drawn blinds.

Fuck that, and fuck them. People of all sizes deserve the ability to live and thrive in a world that accommodates them.

I’m sure that Nike’s decision to have a plus size line has far more to do with profit than politics, but it’s nonetheless a step in the right direction and I hope designers of all types of clothing will follow suit.

And I hope that, until the world fully accommodates us, fat people are clear that the world is messed up, and we are fine.

If you like this article, please share it! Your clicks keep us alive!
Tags
Nike plus size
fatphobia
fat acceptance
Body Positive
fitness
fat athlete