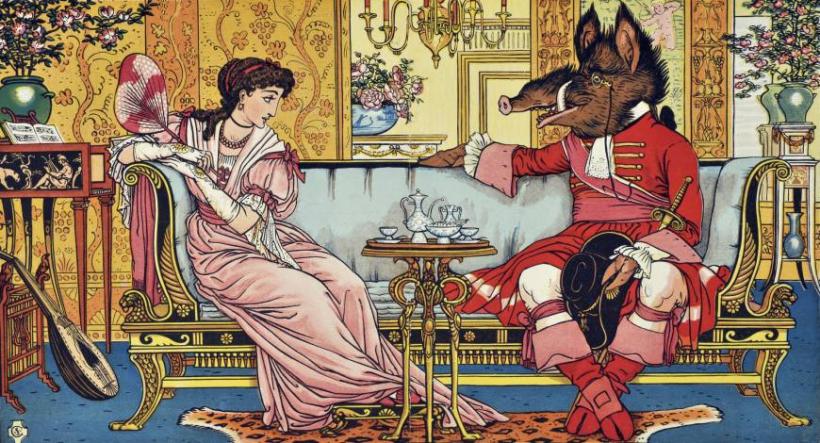 When my husband suggested we see the 2017 remake of Beauty and The Beast, I told him we couldn't watch it because I'd be looking at it through appearance diversity lens. My disability pride and politics ruin everything!

But we went, and I tried to keep an open mind. I watched it, and I enjoyed it. There was a beautiful, diverse cast, filled with strong black women as lead characters — and a gay storyline, too! I liked the costumes and the songs. I especially liked the animated personifications of candlesticks, clock, duster, cup, saucer and furniture. They were charming. I still couldn't get past the idea of The Beast, though.

Not only was he a violent captor, but he was that way because of his appearance — some might say his ugliness.

A young prince was punished for being nasty, for judging another person's appearance. He was turned from a handsome, conventionally attractive man, to a hairy, oversized cross between a man and an animal. He became The Beast.

He was made "to look hideous like a beast," because "how can you love a beast?" He was deemed unloveable — I suspect because of his behavior and appearance.

And then Belle came along. She’s beautiful, but the villagers thought she was odd because she wanted more than just a provincial life and she could read, which helped her escape the small-minded small town.  The handsome — yet not so smart — eligible bachelor wanted to marry her, but she wanted more.

And then, after The Beast took her father and then her captive, she fell in love with him. It was always hoped The Beast would fall in love with a beautiful woman so he could return to his former, handsome self.

Here are my thoughts about Beauty and The Beast, as a person with a facial difference, looking at it through an appearance diversity lens:

The Beast says, "The outside world has no place for a creature like me." This implies that people with visible differences aren't welcome in the wider world.

The film argues that it takes an open-minded, special person to love a person who looks different — hideous, even. Belle was not like the other women in the town; she was “special.” The partners of people with disability, especially visible differences such as facial disfigurements, are often called strong and special for “taking us on.”

Belle was The Beast's savior because she had the privilege of being beautiful. It was only a beautiful woman who could make The Beast feel loved and turn back to his conventionally attractive former self. I wonder — had she looked like a Beast too, would the pair still have lived happily ever after?

The Beast was unhappy when he had a visible difference. The film gave the message that having a visible difference equals a life of loneliness and darkness. When The Beast lived as a beast, it was always winter, even in June. As soon as he became the handsome, conventionally attractive man, his world brightened — it was Spring!

But life with a visible difference is not gloomy. Sure people stare, make rude comments, and avoid us. But life can be amazing, full of achievements and love, and many of us aren't lonely — or evil. The Beast was violent and mean at times, though Belle said he wouldn't hurt anyone. This reinforces the villain stereotype — that people with facial differences are portrayed as monsters, evil within.

They recoiled in horror when The Beast's face was shown through the mirror — much like some children have done when they've seen me.

Belle showed that people need to look past unattractive appearances to see their beauty. But why can't people see the visible difference and be comfortable with that? My disability and facial difference is a big part of my identity, and I don't want people to look past that — because it's me.

The Beast's appearance had to change for him to be happy, to be kind, and to be valued by the community. They were scared of him when he had a visible difference. This shows the audience that happiness can only come from attractiveness, and we must change ourselves to be fully accepted by others — to make others more comfortable around us, even.

People are afraid of difference. Belle could read, and people in the village saw that as a threat. And they recoiled in horror when The Beast's face was shown through the mirror — much like some children have done when they've seen me.

Oh but it's a fairytale, you exclaim! I know I will receive some backlash for this. I'm overreacting, it's only a story, it's political correctness gone mad, why do I have to ruin the fun? Well, I strive to look deeper at disability and appearance diversity issues.  As the late, great Stella Young said:

"Disability doesn't make you exceptional but questioning what you think you know about it does,"

Fairytales shape the way children see people. Children (and adults) see the world through film and literature, which almost always has narratives of good and evil, beautiful and ugly. Representation matters. Why is good depicted as conventionally beautiful, while evil is always shown through a non-normative appearance?

I've had children see me and hide behind their mothers because they're afraid. I don't want my face to frighten a child.

People expect me to want to change my appearance because they think I'd then lead a happier life.

When the only characters with facial differences and disability are depicted as ugly, frightening, lonely, and evil, it's hard to shake the stereotype. We need more diversity on screen, especially stories and films made for children. It's time this narrative changed, or there'll be yet another generation who believes this beauty myth.

Have a think about why you are afraid of facial difference - why you look away at the ugly. Did it start with reading and watching fairy tales?

If you like this article, please share it! Your clicks keep us alive!
Tags
beauty and the beast
Disney
Movies
fairy tales
media
pop culture
princesses
disability
body image

How Can I Be Black If My Skin Is Red? Navigating Race With Ichthyosis
Carly Findlay