How Can I Be Black If My Skin Is Red? Navigating Race With Ichthyosis 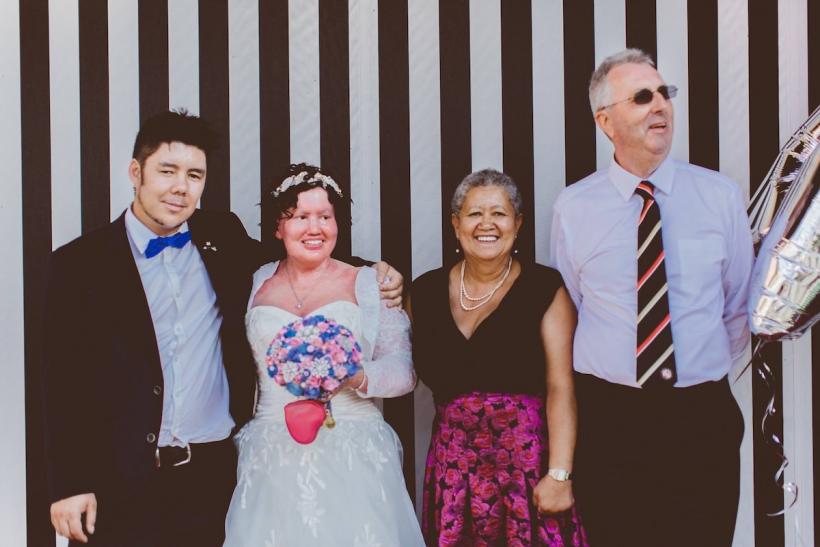 When I was little, I wanted to have "normal" skin. I would often pull up my sleeves and look at my forearms, showing them off to the kids at school. They weren't really my friends — I didn't have many.

My arms were the part of my body that could pass as "normal."

If I were to wear a mask and just bare my forearms, I could pretend I didn't have Ichthyosis — the congenital severe, rare, and painful skin condition that makes my skin red and scaly. The skin on my forearms is, for most of the time, smooth and pale. It does get red when I'm sore. Strangers often tell me, ignorantly, that Ichthyosis doesn't seem to affect my arms.

I used to ask the kids at school whether I would be white or black or brown if I didn't have red skin. "White!" they would say, nodding their heads furiously. White, like it was the desired, socially acceptable shade. Were they trying to tell me that if I had a chance at being normal, I wouldn't want to stick out again in my small, white bread Lutheran town in country Australia with — gasp — dark skin?!

My Mum has dark skin. She's South African — classed as a colored in Apartheid terms. Her skin is like brown sugar, chocolate milk, iced coffee. She and my Dad, a white-skinned Englishman, courted illegally for four years under the Apartheid regime. They moved to Australia in the early 1980s to escape the Apartheid so they could get married, and I was born soon after.

It took me a long time to identify as "Carly with the red skin." It was so often associated with rude nicknames like "traffic light" and "Red Head Match."

Mum's skin is ageless. A bit like my skin — though for different genetic reasons. The smell of Oil of Olay is long gone from mum's dresser. She doesn't rely on beauty products to keep herself looking youthful. A few years ago, while sitting in the Emergency Department — I had cut my thumb severely — I said to Mum that I thought her neck needed a bit of moisturizer. She was nearing 60. She pulled at her neck and said,

"No. I've always had great skin. It's never been a problem."

"Thanks for passing it on to me," I chided. We both burst out laughing, which encouraged those patients who overheard our witty exchange to laugh too.

My parents have black and white skin. My skin tone isn't mid-way; it's red. It's so far from the "exotic" complexion I could have had.

It took me a long time to identify as "Carly with the red skin." It was so often associated with rude nicknames like "traffic light" and "Red Head Match." And of course, I just wanted to be "normal."

But how else would you describe my face? Red is a fair and factual descriptor. Not an insult. Not derogatory. Just a fact.

I asked others with Ichthyosis how they see themselves — especially if they are red. A couple recognized their color, said it was a fact, similar to me. Some didn't want to see their color, and that's often to do with other people's reactions — called derogatory names, told they ruin school photos, accused of being sunburnt or dirty.

Some who are red like me see themselves as white, because that's their ethnicity. A child found this question confronting; they were unsure of answering. But their parent thought they'd see themselves like everyone else.

My geneticist confirmed there's a typical facial structure for people with Ichthyosis. High set foreheads. Redness. Outwardly turned eyes. Round faces. Scaly skin. When I meet someone with Ichthyosis — especially the type I have — I feel like they're my sibling. They look like my relatives. We can finish each other's sentences like family.

I've been thinking about my culture. It's been a struggle to write this because I feel like a fraud. I didn't grow up learning Afrikaans or listening to rap as my South African friends did. I ate a lot of curries. And I called my parents' close friends Uncle and Aunty, even though they weren't relatives. My Dad's English accent rubbed off on me, and I knew a lot about the Liverpool Football Club. But I sort of just felt Australian. Aussie pop culture and barbecues and running through the sprinkler in the summer. My parents were insistent I get one of my Australian 'Aunties' to teach me the national anthem so I could sing it at school.

Lately, I've been saying I've got black heritage. Of course, I call out racism, but I worry I'm so red people won't believe me. Not that it matters — I should call out racism, no matter what color I am.

I worry that Rachel Dolezal has made it hard for people like me to talk about race. And is it even my issue to take on, when I don't identify as either black or white? The online discussions around race and when to speak up or butt out makes me quite frightened to be a part of the conversation. But if there's a place at the table for me, I'll listen.

Sometimes I'm called a woman of color — because of my redness, and by some people who know my black heritage. I'm talking to and reading more from Black women, and the more I read and hear about their experiences, the more I want to learn. I also relate to some of their experiences because of my experiences with disability and discrimination, but I know that it might be seen as false equivalence and I don't want even to presume to understand what it's really like. Whiteness and blackness are more than skin color — they're about levels of privilege.

Would I be a fraud to claim blackness when I haven’t lived my mother’s Black culture and I haven’t experienced the racism she did under Apartheid?

Culturally, I feel like a middle-class white woman. I live in suburbia. I listen to Aussie rock music. I earn a decent wage. I'm married and have traveled internationally. But I have felt discriminated against because of my skin color — perhaps in similar and different ways to my Black family and friends. And I also see my skin as my identity, finally.

I look at my family: we're a melting pot of South African and English, and my husband is Malaysian-Australian. And those Ichthyosis genes have created a uniqueness and bond that only a few others in the world understand.

After years of wanting to be different — or different from my difference — I have come to love my color. My color as a fashion accessory. As a talking point. As a culture. And after so many told me I should be ashamed of my color, that I shouldn't change it, I embrace it.

How Can I Be Black If My Skin Is Red? Navigating Race With Ichthyosis
Carly Findlay