Forgiving My Father After A Decade Of Estrangement 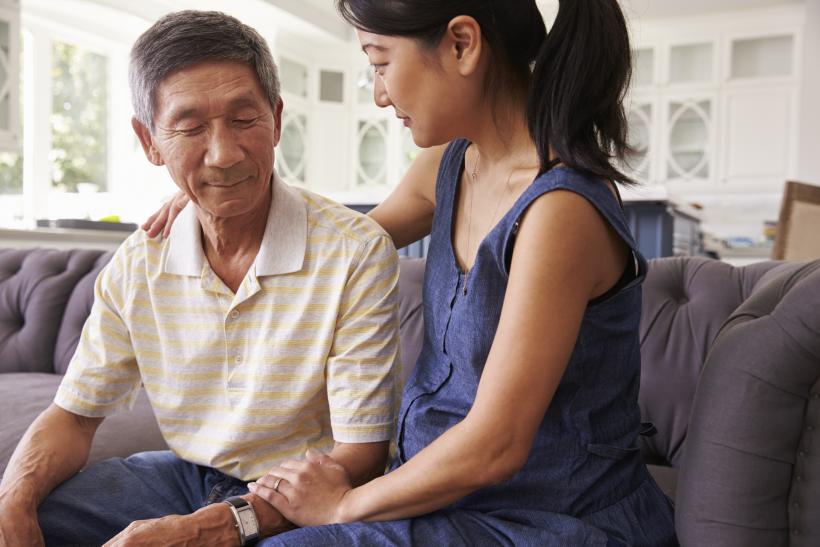 A decade is a long time to lose with a loved one...

Two years ago, I had a two-year-old daughter who’d never met her grandfather. That was not because my father was deceased, a deadbeat, or otherwise absent; it was because I had written him out of my life.

In early 2006, just six months after my husband and I had gotten married, a rift caused by my father tore my family apart. He left our family, and subsequently left my mother, my two sisters and me to pick up the broken pieces of ourselves that were splayed all over the floors of the home we’d made our lives in. And had you asked me at any point over the near-decade that ensued, I would have told you with a hollow resonance that I had not survived.

Nine years went by in which I clambered desperately through my own darkness, which enveloped me as a result of what had happened. I peeled back layer upon layer of the choices my father had made, each of which led to his ultimate departure and what felt distinctly like my ultimate ending. I took each day that passed as another opportunity for me to claw deeper down into the burrow I’d created for myself. I was angry, I cried unremittingly, and I had static electricity coursing through my veins.

Betrayal is a perplexing thing; I couldn’t speak his name without breaking down. I had regular nightmares in which I’d yell and scream, or worse, where he’d command my name and I’d run away as fast as my feet would carry me. The muscles in my legs would burn, and my lungs would ache. I would wake up and realize I feared the very person I’d always so deeply loved.

I forgave. I did not forget, nor will our relationship be the same, but we’ve been carefully placed back together. There are pieces missing, of course. There are chunks of us that are upside down and backward, and entire areas of our map that are torn and taped back together. But we are whole enough all the same.

My marriage suffered. My friends worried. Everybody tiptoed around it all for fear they’d send me careening off that emotional cliff I lived my life teetering over. None of it was what I wanted, but I could not believe I had any power to change my situation at all. I was shattered and broken on the floor; it wasn’t my doing, and nothing in this world would ever bring me back to where I’d been before it all.

But a decade of heartache wore me down. My resentment was exhausting. My disdain was killing me. I could hear muffled sounds of laughter and joy, and I wanted it; so slowly and intently, I began to claw at the thick, wooden boards I’d nailed over the windows of my heart. And sure enough, in due time, light poured in.

I chose forgiveness for myriad reasons. My heart and my weary mind could handle no longer the thought of any human suffering — not of my own, nor of my father’s.

We lost the years that are behind us because I buried my father in the ground. It took me a long time before I realized that the resentment and bitter, brewing vitriol inside me were killing only me — that I’d fallen into that hole in the earth right alongside him.

I forgave. I did not forget, nor will our relationship be the same, but we’ve been carefully placed back together. There are pieces missing, of course. There are chunks of us that are upside down and backward, and entire areas of our map that are torn and taped back together. But we are whole enough all the same.

I gave my father the opportunity to know his granddaughter. I raised my father from the dead. My world's a lot lighter now.

Make no mistake with all of this: forgiveness isn't about the transgressor whatsoever. No offender even holds the right to be informed of such a thing. Because with all due respect, this isn’t about them — it’s about you. It’s about your ability to sleep soundly at night, to keep your demons at bay, and to prevent the parasites from eating away at your mental and emotional wellbeing. The value of forgiveness is inherently personal; it benefits you by giving you your very self back.

So try this: relinquish the desire to control the actions of others, and focus instead on the control of your own thought process and reactions. When external stressors start clawing at your back, you can only control your response. And even when you feel you cannot — when doing such a thing feels impossible beyond anything you could ever imagine — you must do everything in your power to keep your head above the surface.

I know I will, at any rate, I’ll never lose another decade of my life again. This life just isn’t long enough for another deep-dive into my desolation.

If you like this article, please share it! Your clicks keep us alive!
Tags
forgiveness
family
family betrayal
father-daughter relationship
Healing