Another One Bites The Dust: Surviving My Friends' Divorces 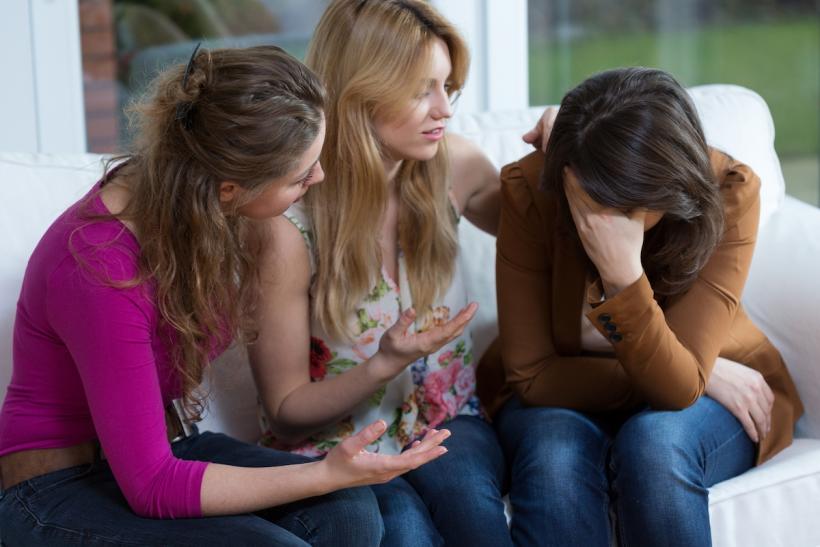 Then she just left me there — staring at the pieces of shrapnel that exploded from her truth bomb.

It’s not like I was totally naive about divorce. I’m a child of divorce. Most of the peers I grew up with had blended families with half siblings and step-parents. It doesn’t make it any less weird that eight years later, I am that other woman in the bar, watching my friends reassemble their lives in the wake of a relationship they took the ultimate bet on. The foundation of their lives is crumbling in no uncertain terms. This is what divorce does. At least that’s how it appears from my view in the moderately-priced seats.

It’s never easy to watch painful things happen to the people you love. There is an added layer when you watch them lose something you have. For me, the classic stages of grief have somewhat applied to this experience. First, there was definitely denial, but not in the “You guys can’t be serious; you’re soulmates!” kind of way. It was me telling myself, "That's not us. We're better. We're stronger."

It was as if the only way not to drown in grief was to climb up on my high horse.

Anger was next. That part was easy. I had many partners at which to be angry. Some cheated. Some were abusive. This was the thick, sludgy kind of anger you have to do something with. I remember one time a mutual friend of one divorcing couple called me in the middle of the day. He said, “I’m really fucked up over this. I can’t explain it.” I got it. “Fucked up” was an exquisitely apt way to put it. I knew my own issues were running deep when I crafted a “write and burn” letter to one unfaithful husband only to realize I was writing it to my dad. Yikes. There just weren’t enough Oreos in the world at that point.

Following anger is supposed to be bargaining, yet my next stop on this crazy train looked more like auditing.

This was, by far, the worst stage. The high horse named We’re Better stopped carting me away from feelings of absolute dread when I started asking myself, “But are we?” Don't people change? Doesn't life throw terrible things at us that we can't control? And don't those things wreak havoc on relationships, no matter how well established?

I could have easily driven myself crazy with all the "what ifs." It seemed not only necessary but responsible to torture myself in this fashion. It felt cocky and downright disrespectful to my friends to feel like I was immune to what they were going through. It also felt like catastrophic thinking to envision myself picking up my own pieces.

So where was the balance?

That would continue to elude me, for I would find more efficient methods than a high horse to keep carting me away from actually dealing with this secondhand trauma. Enter, crushes on other men.

Watching my friends become single was heart-wrenching. Watching them be single was quite another thing. I haven’t been with another sexual partner in 10 whopping years, and nothing reminded me of that more than hearing all about my friends’ sext and swipe-right adventures. As much as I did not envy the sudden upheaval of their lives, this made me mourn my prowling past intensely. Mix that in with resurfaced daddy issues and general distrust of all married men. The result was me not wanting to lay a finger on my husband.

My anger, paranoia, anxiety, and avoidance were gestating into a self-fulfilling prophecy.

At least I could see that. As soon as I did, there came a turning point that started with an idea I have to remind myself of daily — divorce is not the devil.

Some people could say their divorce was the worst thing that happened to them, but it’s not the worst thing that could happen. There are a few things above divorce on my Please God No list. Divorce also clearly doesn’t mean that I made a mistake marrying my husband since I watched couples who “made sense” uncouple. I watched people who did everything right still pack it in. While I wasted time and energy screaming “Why?!,” I was not present. I was not a partner.

This may sound just as dismissive as all my avoidance techniques, but this doesn’t include all the lessons, or rather the reinforcement of basic relationship principles, I have received in the past year. I remember to nurture intimacy and communication. I’m reminded to approach my marriage with the deliberateness I would apply to anything else I want to succeed. I know my marriage cannot survive on autopilot. I also know I can survive without my marriage. But that’s not today.

If you like this article, please share it! Your clicks keep us alive!
Tags
divorce
divorce rate
marriage
friendships
fear

Low-Maintenance Chic Is For Every Body
Briana Hernandez

The Key To Confidence Is Being A Big, Fat Liar
Briana Hernandez