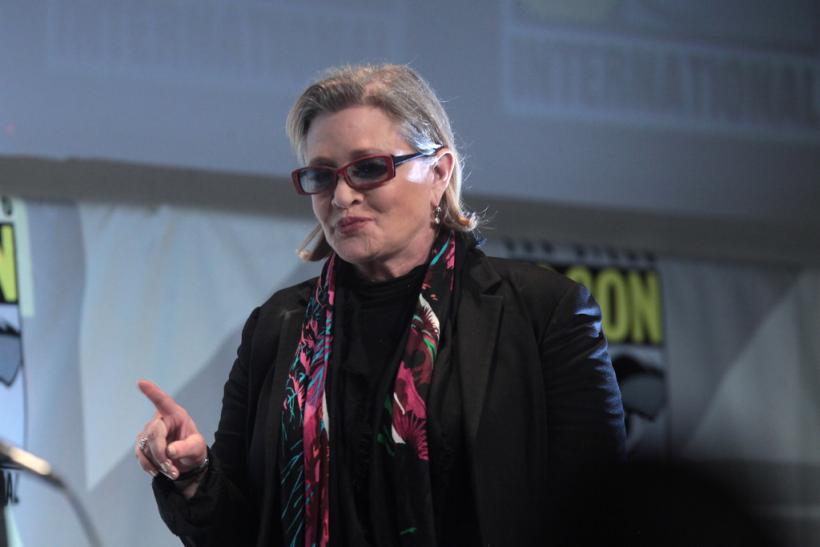 Carrie Fisher died last year. Two days after Christmas she collapsed on a transcontinental flight from London. She remained unresponsive; four days later she was dead. There was speculation at the time about her overall health, both mental and physical, but today we know one thing for certain: Carrie died with a number of substances in her system.

At some point, either in the days leading up to or on the day of her collapse, Carrie ingested cocaine, methadone, ethanol, and opiates. These were reported today via autopsy reports from The Los Angeles County Coroner's Office. We'll never know if those substances played a role in her death.

There is a profound feeling of hopelessness that occurs when you realize there is no way out.

In April of 2009, on a warm California spring day, I found my mother unresponsive on the floor of her small apartment, just a mile or so from my house. I had phoned her multiple times earlier in the day, greeted each time by her exaggeratedly cheerful voice on the answering machine. I was working nights and coming off of a shift. When I woke up, and she still didn’t answer, I drove to her house.

My three children — 14, 11 and 9 — were in the car. When we arrived, I parked on the street with her door in view. I asked the children to wait. I wasn't sure what I'd find. Her car was parked in her space. The blinds were drawn tight. The door was locked. I knocked, then banged with my fist. It was eventually answered by a man I didn’t recognize; he was holding a beer. Behind him, in the tiny galley kitchen, was a woman I didn’t recognize; she was cooking enchiladas.

My mother was sprawled on the floor in front of her sofa, wedged between it and the coffee table, nude but for a pair of underwear, face buried in the cheap brown carpet. There was a sundress crumpled on the floor a few feet away. She was, for the most part, unresponsive. She’d periodically lift her head to the metal mixing bowl in front of her to vomit, drop it to the floor, then lift it again and repeat. There was a handle of vodka on the sofa above her; it was empty.

When I screamed, “WHAT THE FUCK IS GOING ON,” Enchilada Lady told me my mother had the flu.

I called my grandfather, who also lived a mile or so away, and told him I needed his help. I called someone to take my kids home. I don’t remember who; it’s all a blur of vomit and cigarette smoke and enchilada sauce scalding on the stovetop. I pulled the dirty dress over her head. I pulled her down the cement stairs to my grandfather’s Crown Vic. My grandmother was sitting in the front seat, silent.

We drove her to a nearby hospital, the same one where I was employed. I held her mixing bowl. I hoped the social worker would admit her to the psychiatric facility a few miles away. The ER nurse took us to a curtained “room.” I took off the dress I’d just put on and tied a hospital gown around her body as she swayed and mumbled and dry-heaved into an emesis basin.

They drew her blood. I cried.

When the social worker peeked around the curtain and asked me to step outside, I thought I’d be getting transfer paperwork. She was a social worker I’d worked with before professionally, one who knew me as an RN. She’d sat with me during a few stillbirths in the Labor and Delivery unit, just one floor up from where my mother now lay on a sterile examination table, trying to act like we were having some sort of typical family gathering.

If you don’t know much about blood alcohol levels, let me give you a quick primer. A BAL of .08 is legally drunk. Markers of the .25-.30 range include general inertia, near total loss of motor functions, little response to stimuli, inability to stand or walk, vomiting, and incontinence. And .39? Well, .37% or higher can be fatal, and .45% and higher are fatal to nearly all individuals.

“The fact that she’s coherent at all suggests that she really must drink a lot. She should be dead, Joni.”

I wiped my eyes on my sleeve and took my mother home.

She gradually stopped going to AA. She gradually bought bigger and bigger bottles of booze. She gradually was as drunk as she was on the day I dragged her down her cement stairs to try to help her shake the demons that chased her.

My mom is an alcoholic; she has bipolar disorder. Just like Carrie, my mom battles both.

Most of the time she loses. She rides the wave of mania until it crashes into the rocky sea wall and obliterates everything around her. And when the depression comes, which is often, she drowns herself in the biggest bottle of whatever is on sale.

I hate her. For not being there. For choosing herself over and over. For making me believe that to be like her was to be miserable.

And I love her. For trying when she did. For doing the best she could. For giving me the genetic gift of this illness. It’s this illness, and trying to navigate how to live with it, that has made me who I am.

She has tried, but not that hard. She wouldn’t be med-compliant, even after I took her to my doctor, drove her to the mental health department, filled her prescriptions. She can’t stay sober. She can't stay sane.

It’s not her as much as it’s the disease.

It will never let go. That’s not how it works. There is no cure. There is no logical way around the mountains and valleys of being bipolar. It’s got her in its grasp.

I wonder if it had Carrie in its grasp, too?

There is a profound feeling of hopelessness that occurs when you realize there is no way out. The feeling is a thick blanket of fog that surrounds you, isolates you, obscures your vision. The only way out is through. Why would you go through?

Can you blame someone tormented by their own mind for looking for something that might lift that fog, even if for just a few moments? Can I blame my mom? Can we blame Carrie?

No. There is no space for blame here, only understanding. Only love. Only help.

Whatever was in Carrie Fisher’s system when she died isn’t the headline. The real story is in the life she lived, the battle she fought with herself.

I love her — for talking about struggling, and for trying her best. That’s all we can do.