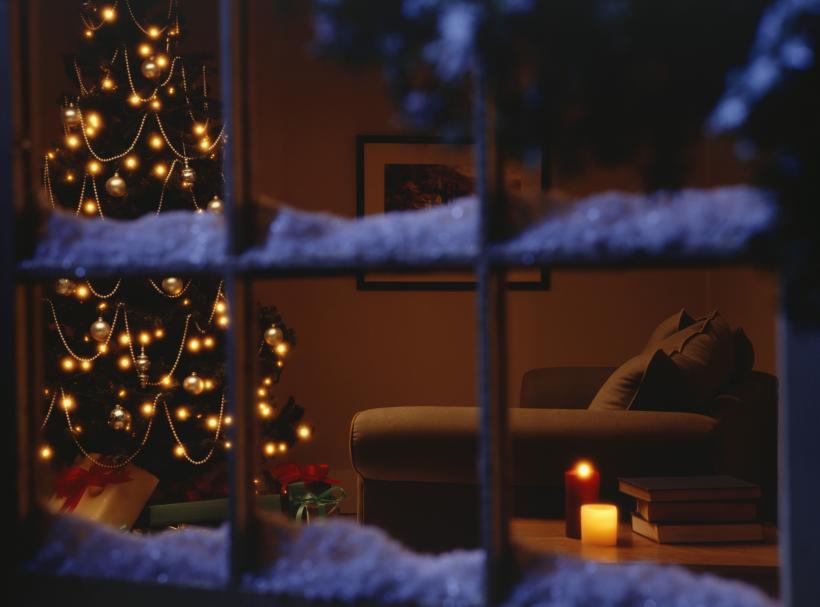 Yule is a promise: winter sucks, but spring will come again.

If you come to my home in the month of December, you will find a large evergreen tree, hung with electric lights and a variety of brightly colored decorations. There will be stockings (over a heat register — we don’t have a fireplace) and other festive, seasonal decor. All of that cheer might give you the wrong impression. You might assume that we, like many other American families, are gearing up to celebrate the miraculous birth of a certain man. I invite you to look closer, to notice the lack of nativity scenes and the pine cones on our family altar.

That’s right: this is a pagan household, and we’re excited about the celebration of Yule, a holiday that takes place on the shortest day (and longest night!) of the year, also known as the winter solstice. It usually falls on December 21st.

The winter solstice and Yule are not 100% the same thing (one is a cosmic event, the other is a traditional holiday that corresponds to it) but many pagans use the terms more or less interchangeably. I’ll be using both in this piece.

I love my religion, and I love sharing my faith and traditions with my child (although I’ll respect whatever path he chooses for himself as he grows). But the fact is, Christmas is a massive holiday, and it takes up a lot of space. Marketing (and many people) assumes that everyone is Christian until they specifically mention otherwise.

So, I find myself saying, “It’s four days earlier” a whole lot. It’s a constant act of clarifying and explaining to the outside world, of gently reminding people that we exist.

Yule is not about a singular historical event; in fact, it is very much the opposite. It’s about the miracle that we witness every single year, a miracle that never stops happening. Every year, the winter gets colder and darker and bleaker. And every year, it is the darkest it will ever be on the solstice itself. We light our lights and celebrate to remind ourselves that even though winter is too cold and too long, a seemingly impossible truth remains. After the solstice, the light very slowly begins to return, and every day is a little bit longer.

Yule is a promise: winter sucks, but spring will come again.

We’ll thank the sun, and say a blessing, and dream of the warmth to come and the gardens we’ll plant in the spring.

My task, then, is to center that for my family in the midst of what can feel like an entire month of Christmas crap. To make matters more complicated, some of the traditions that were once a part of solstice celebrations (“Make the yuletide gay,” anyone?) have since been appropriated for Christmas festivities. While in some ways this makes it easier for us than members of other religions (when we need festive decor, we’re free to shop in the big green and white section), it does make it hard to differentiate ourselves. Also, my spouse and I both have extended families that celebrate Christmas, and we spend every Christmas Eve with my spouse’s family. Especially with a small child, I worry that we’ll struggle to keep solstice at the center of our winter celebrations. Which is a little ironic, considering that the celts also called it “midwinter.”

The solstice is at the center — that’s its whole point.

It could be very easy to get bogged down and overwhelmed, to accept playing second fiddle to a more popular holiday. And yet, I refuse.

Instead, I will place a pentacle, a disk with a five-pointed star representing the elements and the earth, on the top of our Yule Tree. And I will keep calling it a Yule Tree even though everyone might look at me funny.

I will not be ashamed of my faith or my traditions, and I will not be afraid to borrow a few things back, either. I’ll bake my gingerbread and fill my home with love.

My ancestors needed the hope that the solstice brings to prepare them to endure the rest of winter. They celebrated at a time when it may have been more practical to hoard supplies because they understood that the spirit needs togetherness and warmth. I will insist, however aggressively is needed, that nobody goes to work on the 21st itself.

And on Yule morning, we’ll wake up to find the stockings filled, the gifts already under the tree. We’ll celebrate with our little family and have a cozy breakfast. Last year, we got our kid a book of solstice stories from various traditions, and we’ll probably read one of those stories together. Then we’ll bundle up and head out into the cold for a walk around the neighborhood. It’s important to connect with nature, and to recognize the reality of the ever-shifting seasons — this is how we stay grounded.

In the evening we will make a massive dinner, and our neighbors will come over to join us. Everyone will be mildly exasperated that I made so many desserts. But I won’t care, I’ve been eyeing that Yule Log recipe for months (and after three seasons of The Great British Baking Show, I think I can finally get the roll right!). It gets dark early on the winter solstice, so we’ll light candles. Then we’ll thank the sun, and say a blessing, and dream of the warmth to come and the gardens we’ll plant in the spring.

There may be something else happening four days later, but at least for that day, that’s not my problem.

If you like this article, please share it! Your clicks keep us alive!
Tags
Yule
winter
Christmas
traditions
holidays