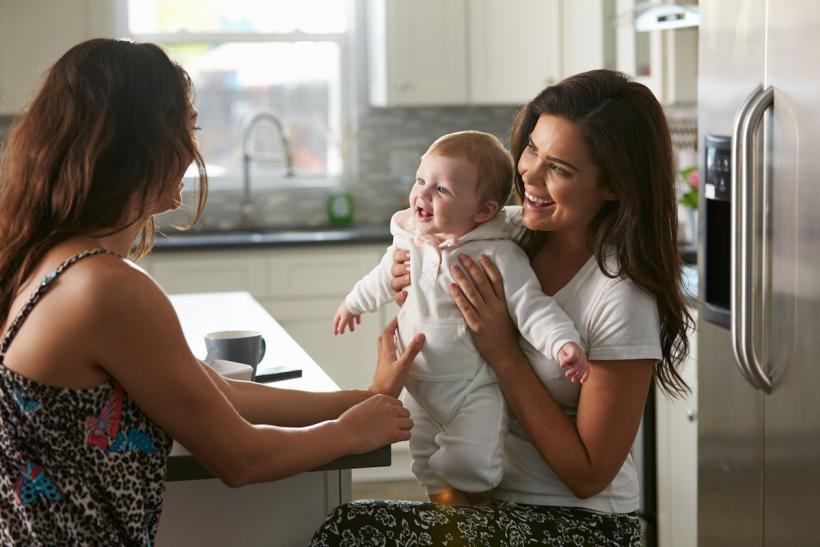 As the dust settled after these battles I could finally see that I don’t have to be a mother to be a parent, and that I can be a parent without being like my mother.

When I was in middle school I told my friends that I never wanted to have kids.

In high school I told my parents that all they’d ever get from me would be grand-dogs. In college, in grad school, and as I turned 30, I never once doubted my conviction that motherhood was not for me. In a matter of months, all that changed.

My relationship with my mother has always been rocky, and since I came out it has been getting worse. One particular phone conversation left me tearfully determined to cut her out of my life, and after I hung up I just sat there, thinking about growing up in that conventional, comfortable, middle-class Midwestern home. I thought about how no one in my family says “I love you” unless somebody is being rolled into an operating room. I thought about how I don’t believe I’ve ever seen my parents so much as hug each other. And I thought about how my mother, who had no career, friends, or life of her own while I was growing up, continued to treat me like a helpless child incapable of knowing who I am and what I want.

As much as I hate to say it, she was right.

I had laughed at my gynecologist when she asked if I needed time to consider whether to go through with the hysterectomy she was proposing as treatment for my never-ending periods.

“I’d hop on the operating table tomorrow if you’d let me,” I told her.

She didn’t, but a month later it was done and I was on my way to a blissfully uterus-free life. I was ecstatic. I no longer felt dominated by my body’s reproductive potential. My body finally matched how I had always seen myself: as a thinking, feeling person first and foremost, whose biological sex was a minor fact among the multitude of facts that make up who I am.

The disastrous phone call to my mother forced me to admit that she had been right when she told me to “never say never.” I realized, with the phone still in my hand, that I actually do want all the things I used to swear I didn’t even like. I want a home full of people celebrating or commiserating about their week while cooking dinner together, who hear the words “I love you” from each other, and who don’t all sit on separate pieces of furniture when they watch a movie. I want a home full of people who make each other happier and better by talking to each other and showing each other all the different ways we can live and love.

At the moment that it had become hardest for me to have one, I realized that I want a family.

Recently I heard about SB 149, the law passed in South Dakota that protects adoption agencies who refuse to work with LGBTQ people on personal religious grounds. I read the reports and the law itself with dismay, rage, and a new, deep, personal despair. Just as I began to imagine living something like the domestic life pushed so aggressively on women, there in big bold letters was a screaming reminder that I may have to fight for it — and I might lose.

I truly believe that laws like South Dakota’s will not hold up to the challenges they will inevitably face. That isn’t much consolation to the people being affected by the law now, I know, but I’m choosing to be hopeful for others. If I can change so profoundly when it comes to how I understand myself, love, and families, then so can my country.

If you like this article, please share it! Your clicks keep us alive!
Tags
families
coming out
hysterectomy
lesbian
LGBQTIA
queer family

Coming Out And Having A Hysterectomy Opened Me Up To Raising A Family
A.R. LaPlant