Conde Nast's Exploitation Of Writers Of Color Is Inexcusable 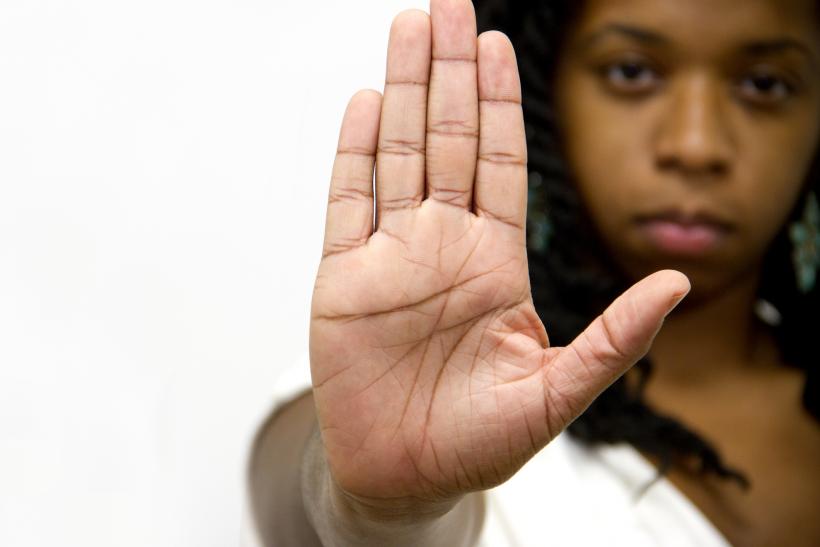 Teen Vogue under the Conde Nast banner is exploiting writers so notoriously and repeatedly that it seems like nothing short of collusion.

When we think of media giant Condé Nast, we think glossy magazines and chic editors. If you let them rule the narrative, that imagery would also include a bunch of femme, queer, and nonbinary editors that are simultaneously woke AF. However, smoke and mirrors continue to be deceptive as ever, and there is nothing #woke about the way that Condé Nast is treating the marginalized writers they claim to love.

Now let me be clear: I believe that, to an extent, Condé Nast does really love their marginalized writers. That is, in the sense that editors employed by the media juggernaut can exploit marginalized writers — particularly writers of color — for their most personal narratives.

By no means is it revolutionary or original that a corporation would break the backs of marginalized folks for the sake of profits. But this is different. We are witnessing more than the cannibalizing effects of capitalism.

We are witnessing the gatekeepers of these companies blatantly neglect and exploit marginalized writers. It’s almost sadistic, really.

The hashtag #CondeNasty was aptly started by Roslyn Talusan to vocalize the injustices suffered by writers of color at the hands of Condé Nast. These egregious acts are perhaps most apparent within media darling Teen Vogue, which has seen a sudden explosion in adoration since their political coverage went stratospherically viral during the 2016 presidential campaign.

Now, for those who are familiar with creative industries, rejection comes as no surprise. In fact, it may even seem dramatic that scorned freelancers are coming out of the woodwork and criticizing Condé Nast. But the scandals surrounding #CondeNasty have very little to do with rejection and everything to do with exploitation.

In Roslyn’s case, her pitch was accepted by Teen Vogue wellness editor Vera Papisova, who later pressured her to move up her deadline despite Roslyn being on vacation. Roslyn met Vera's updated deadline, only to be ghosted in the end, never hearing back from her at all.

As you can see in the following Twitter thread, Roslyn did the work she needed to have her piece published. She met an ambitious deadline, she provided the legal documentation to write about her experience with sexual assault, and she followed up multiple times. There is no excuse for Roslyn (or anyone for that matter) to be exploited by Teen Vogue with no intention of running her piece. At the very least, Vera could have acknowledged her work — even if Teen Vogue was no longer going to publish it. 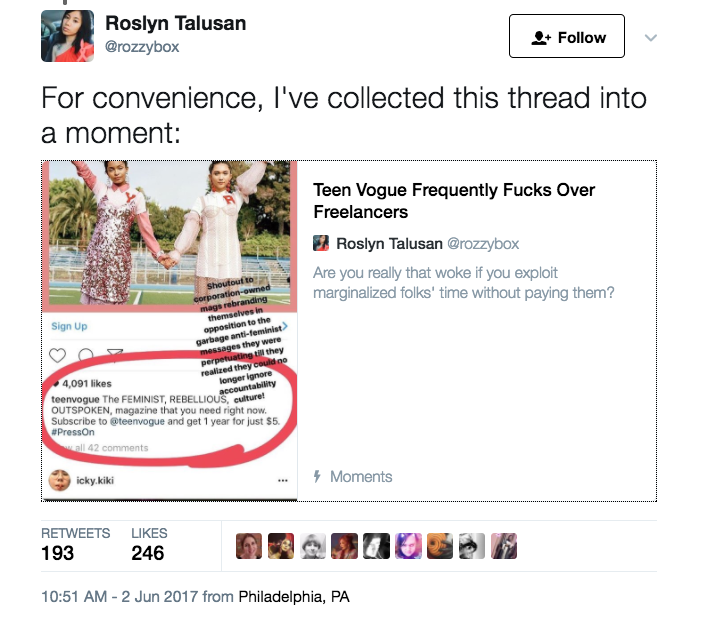 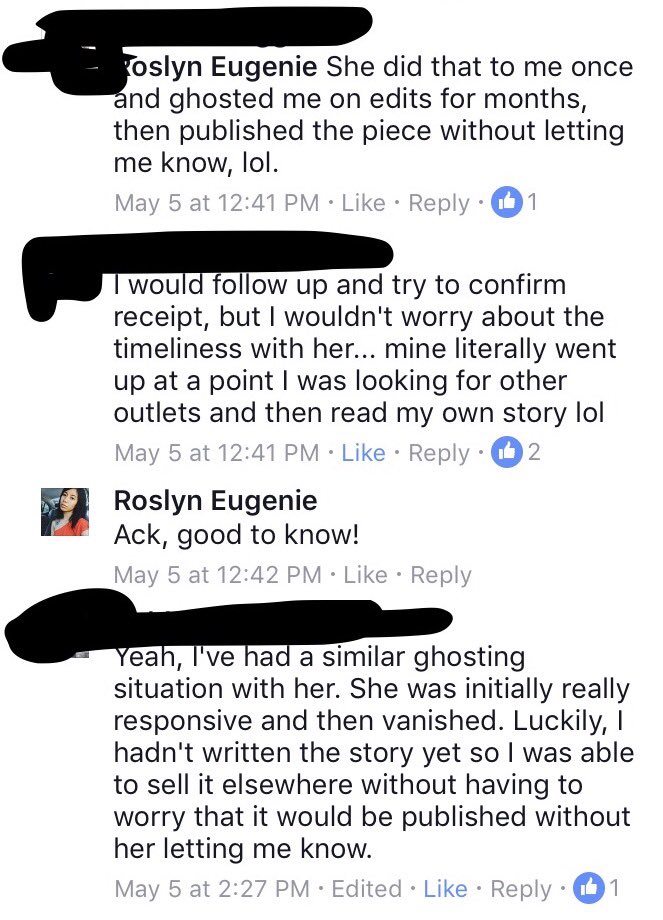 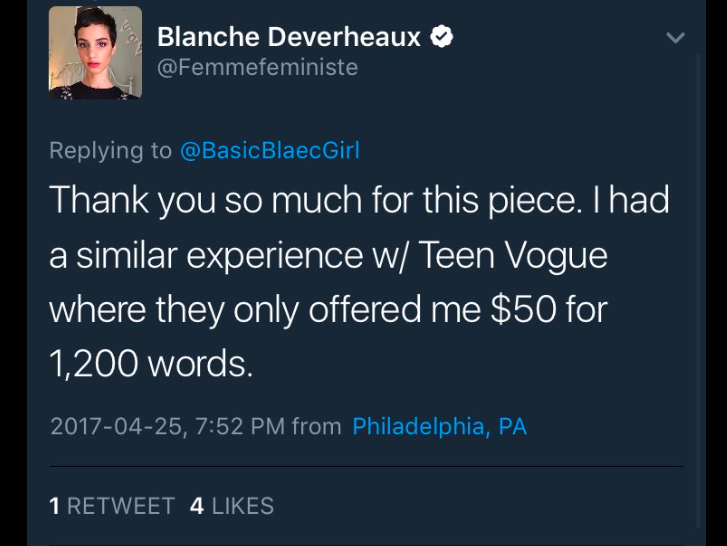 But to be a sexual assault survivor who is choosing to share her story for the sake of awareness, only to be ghosted by the editor of a vertical that claims to take assault seriously, is nothing short of appalling.

These horrific situations only seem to happen to writers of color and marginalized writers. Meanwhile, Condé Nast editors have no problem publishing pieces like Why I Hate My Back Tattoos. The entire copy of the article is as follows: “Because they’re bad. I hate them because they’re bad. Yup. It’s not that deep. They’re just... real terrible.”

Although this piece was written by Sam Escobar, who is a Latinx nonbinary person, the reality is that they are white-passing and femme-presenting, which allows them a lot more privilege than the "typical" marginalized person. Nothing about this is okay. It will never be justifiable for our most vulnerable populations to be exploited by those with more money and power. It is not okay in any industry, whether you are a freelancer or not. 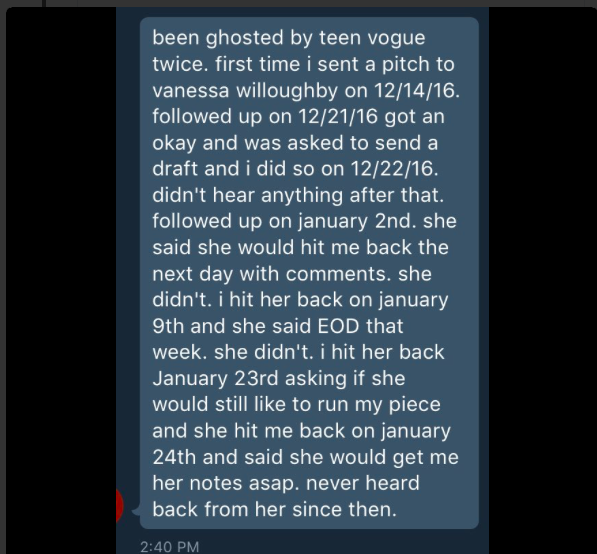 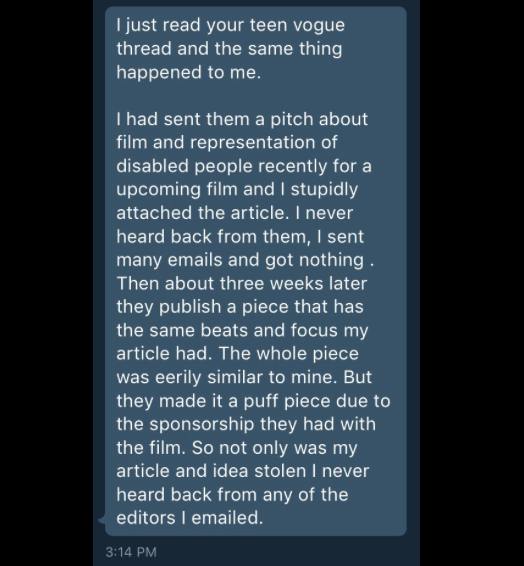 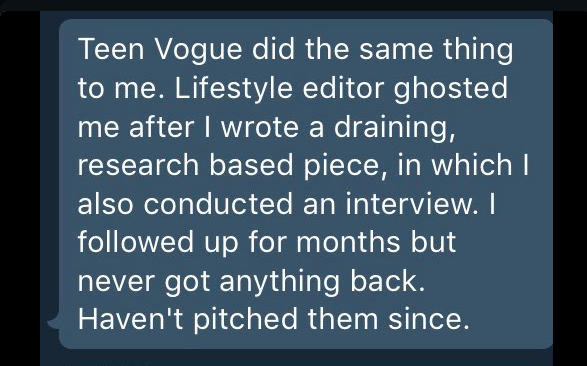 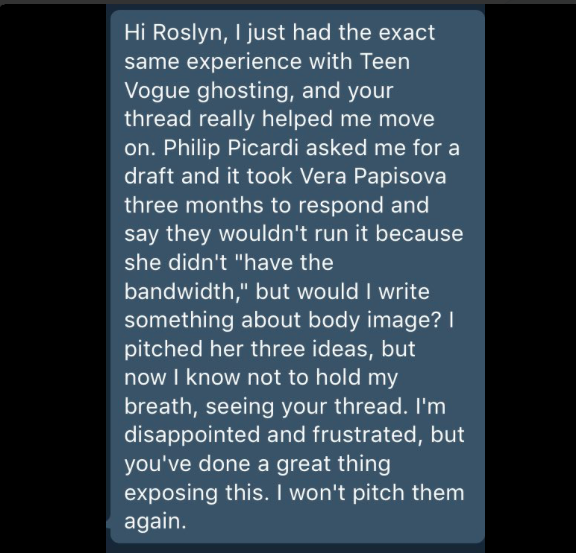 These claims have merit, and it is unknown how many other writers are hiding in the shadows, afraid to speak up. Some told similar stories of being ghosted, others shared experiences of being blatantly plagiarized by Teen Vogue editors who stole their pitches and assigned them to white writers.

Much like employees are often afraid to speak up against their employers, freelancers face even more uncertainty. Writers confided in me regarding their fear of being blacklisted across all Condé Nast publications for speaking out. Writers confided that being published by Condé Nast was still a dream, no matter what the cost or the consequence. And some of the most vulnerable victims of #CondeNasty admitted that they’d love to speak up against the exploitation they faced, but their financial security is nonexistent and they can’t possibly isolate any potential revenue streams.

This is the reality for marginalized writers who have been burned by #CondeNasty. They pitch soul-bearing personal essays and time-intensive reported features only to have them accepted, completed under quick deadlines, and then ghosted by editors. Their pieces never run, they never receive payment, and they don’t even receive kill fees to acknowledge the time spent on producing content for Condé Nast. Editors love marginalized writers when it’s convenient — AKA when they’re thirsty for content or just want to look woke AF.

Sure, it’s easy to chalk it up to editors being swamped or not in control of their publications. (But honestly, once your pitch is accepted, your editor should be quick to communicate.)

Sure, we could make up endless optimistic platitudes to invalidate these writers’ experiences.

But that doesn’t change that these aren’t isolated phenomena. Teen Vogue is exploiting writers so notoriously and repeatedly that it seems like nothing short of collusion.

After pulling her piece from Vera at Teen Vogue, Roslyn’s article found a home at Wear Your Voice magazine — where she raved about her experience working with an editor who was responsive, empathetic, and professional. For that, she is lucky.

But for many of the writers who also bared their souls in return for both a byline and a paycheck they never received, justice is still elusive. It’s shameful, inexcusable, and the total opposite of #woke. 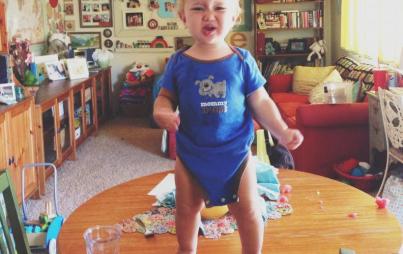 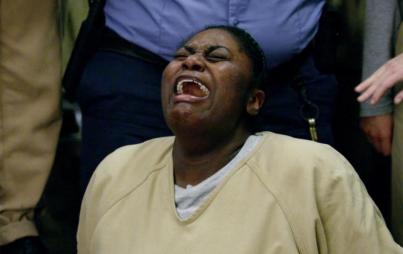 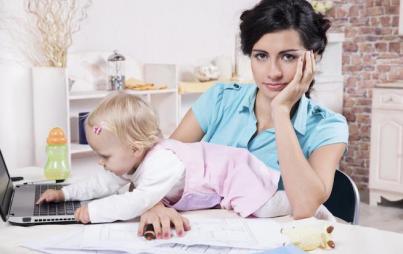 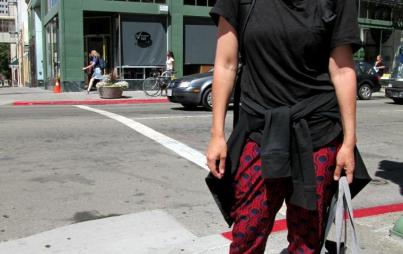