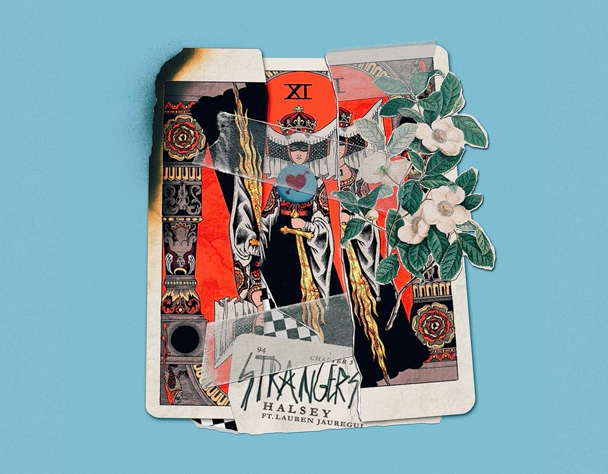 When I heard that Halsey was teaming up with Fifth Harmony member Lauren Jauregui for a track together, I squealed. (Yes, seriously.) Two of my favorite femme artists working together for a song on Halsey’s forthcoming album? Say no more. Immediately, rumors started to swarm around Halsey and Lauren’s respective fandoms about the content of the impending release of “Strangers.”

Halsey and Lauren are both proudly bisexual, and their candor with followers about everything from romance to mental health has created an impenetrable bond between them and their fandoms. A collaboration was natural, especially given the overlap in fan demographics. But “Strangers” is more than a sensical partnership between emerging pop icons; it’s a blatant acknowledgement of lady love.

Let’s be clear: popular music is rife with girl-on-girl references, from bubble-gum pop to hip hop to classic rock. And yes, over the years we’ve seen female stars in particular push the limits of what’s kosher to reference in their song lyrics. There was Katy Perry’s “I Kissed A Girl,” which further popularized the idea that straight girls kissing other girls was a fun party pastime. The same year, pop icon Britney Spears released “If U Seek Amy,” a clever single about how all the boys — and the girls — want to sleep with her.

We sang along and glorified the music that these self-proclaimed vixens produced, but the reality was that these songs weren’t about true bisexuality; they simply made queerness a commodity from which they could generate sales.

I don’t vilify Katy, Britney, or any of the other stars who croon about their experiences kissing girls. However, I do think such sorta-kinda-queer singles contribute to a diminishing of the validity of bisexuality — a sexual identity that society often struggles to see as earnest or genuine. Even when we seem to happen upon an artist who is candid about their sexuality outside the realms of a recording booth, like fellow pop star Demi Lovato, lady love is still posed as an experiment that’s fun to try but not necessarily openly embrace. Demi came close when she would neither confirm nor deny whether the 2015 hit “Cool For The Summer” was about her having a fling with a woman, but that still was far from an admission of queerness.

I am the first to say that expecting people who may not be heterosexual or gender conforming to “come out” is asinine and cruel. But at the same time, artists who choose to use their platform to allude to issues like sexuality but then refuse to acknowledge those allusions any further is a contributing factor to why queer fear is still an issue.

We often look to public figures, especially entertainment icons, with respect and admiration. At the very least, we embrace that they have a platform with which they can disseminate messages that are important to them, and by nature us as well. Particularly with pop stars like Katy, Britney, and Demi, many of these leading ladies have young fans. That’s not to say that there aren’t forty-somethings on the highway jamming to “Toxic” — but the reality is that pop icons have a huge following of youth who look to them in awe.

Naturally, when you have stars producing music that toys with queerness as a drunken activity or clandestine summer romance, you have fans that ultimately feel left out. Where are the lady-loving-ladies who will shout from the rooftops that queer love can be mainstream too?

Apparently, they are right here in the form of Halsey and Lauren Jauregui. Up until now, pop music has tip-toed the lines of what’s okay to discuss in songs and what is marketable enough to top the charts. Even queer male performers like Frank Ocean, Adam Lambert, and Sam Smith often toy with ambiguity of lyrics in order to ensure their tracks have a shot at making it big. But “Strangers” isn’t flirting with the idea of queerness; it’s a full embracement of it.

“She doesn't kiss me on the mouth anymore / 'Cause it's more intimate, than she thinks we should get / She doesn't look me in the eyes anymore / Too scared of what she'll see, somebody holding me”

From the start of the song we see that Halsey and Lauren aren’t hiding what this song is about: ex-girlfriends and the mourning of love lost. She/her pronouns are in full force and it’s awesome because not only is “Strangers” a catchy tune, but it’s finally giving queer fans the ability to hear their experiences in song. It’s finally giving queer artists the chance to sing openly. It’s finally making queerness more than the result of too much gin. It’s finally a radio anthem for the lady loving ladies.