Dealing With A Jealous Co-Worker 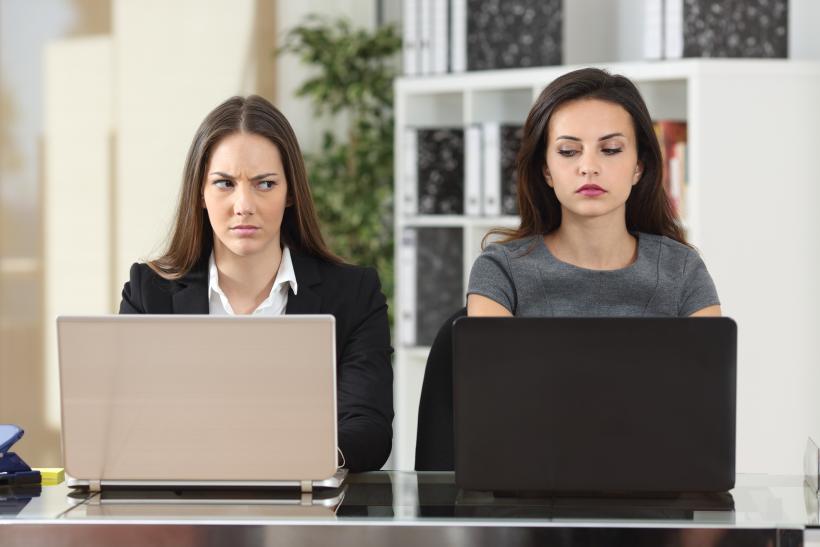 Tips for dealing with a jealous co-worker.

Jealousy is an innate human emotion. I was salty when I heard Jon Snow had proposed to Ygritte. But luckily, it was just a rumor. My point is, there are haters everywhere, but dealing with them during your 9 to 5 is the worst.

I’m not so vain to think that people are envious of me, so it didn’t really click until I heard it from someone else. She let it slip that “everyone likes me and I’m the favorite,” and of course her words got back to me. And then it all made sense. There’s no easy way to deal with the green-eyed monster. But here are five tricks to help spot a spiteful co-worker and how I dealt with it.

Beware of fake praise and the backhanded compliments.

The worst thing a jealous person can do is show others they envy you. So they butter you up with false praise and backhanded compliments. My co-worker knows that I work multiple jobs and long hours, living this #vampirelife. Sometimes she would say things like, “You look tired. Did you get a lot of work done last night?” I would always respond with a cheerful “Yep!” When in actuality I wanted to say, “Yeah, I was up working late. What’s your excuse?”

They talk behind your back.

The truth of the matter is, we look at life differently. Yes, there are rules in place for a reason, but it’s okay to bend them sometimes. For example, as the office assistants, we receive the mail. Mail hours are from 5:45 pm to 7:00 pm. If a staff member didn’t retrieve their mail because they had the day off, I would give it to them before mail hours the next day. Little things like this gave others the perception that I was nicer or more understanding than my colleague. In her defense, there are specific mail hours, but there’s always an exception to a rule.

Because of our differences, people would visit me in the office, until she’d ask them to leave. They would come back while she was on her break. Because people were so used to basically being kicked out of the office, they wouldn’t socialize (read: gossip) while she was in there. One day while I was on break, two directors were talking about someone who was recently fired, and she was shocked. They asked how she hadn’t heard about it and she responded “Because everyone tells Annette everything. She’s Princess Annette.”

They downplay your successes.

It is known that fashion is my greatest passion. It is known. So, this year I offered to produce a camp fashion show. When I was discussing the logistics with the intern, my associate thought it would be great to add her ideas to the mix — which included getting local design students to create custom looks and contacting the media to cover our CAMP FASHION SHOW. I didn’t want to be rude and tell her that her ideas sucked. So I just thanked her for her contribution and pretended to write them down. I decided to do a trend driven show using clothes the campers already had. Afterward, I heard a rumor that the show was entirely her idea and I was taking all the credit for it.

They criticize you whenever possible.

Any work situation can get sticky when you live and work together for three months. While trying to ignore my difficult counterpart, a friend came to me crying. She shared that people in her department were super judgmental and overly critical. She happened to be a nurse's assistant in the Camp Health Center — where making even a simple mistake can be serious. Although her colleagues felt like they were dishing out tough love, she often felt picked on. “If it were tough love, they would tell you the good things as well. But they find ways to twist positive things into a negative. ‘Like, oh she must be OCD because it’s too clean’ but it has to be sanitary, so how is that a bad thing?”

They humiliate you in front of others.

As a newly 21-year-old college student studying nursing, my friend took advantage of her two nights off a week. After criticizing her for what she wore and how often she went out, a nurse warned her to “be careful not to turn into someone that steals meds from
their patients."

She was obviously upset by such a harsh comment. Like, who says that? To a college student, in front of co-workers and patients no less! I told her that the nurse is just tired and bitter. She probably didn't have the courage or confidence to live the life she wanted, so she’s passing judgment.

Her response was “I have a mom, and her job is not to be my mom; it’s to be a nurse. Just because we have different personalities or lifestyles doesn’t make one right and one wrong.”

The bottom line is, Haters gonna hate. But there is a point where jealousy becomes toxic. The best thing you can do is — do you! Continue living your life and thriving in spite of their negativity and judgment. Because guess what? That will piss them off even more!

If you like this article, please share it! Your clicks keep us alive!
Tags
jealousy
co-workers
job
stress
self-care
Employment
employee