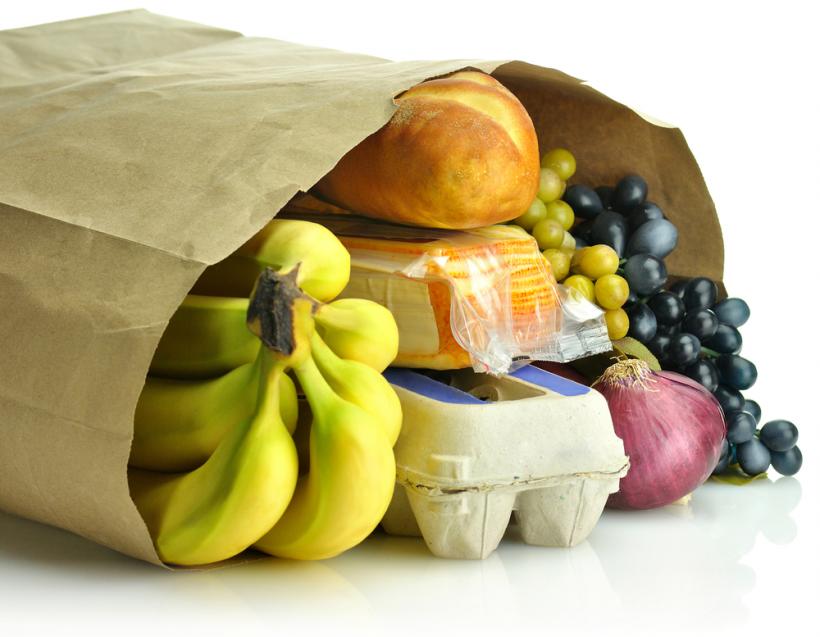 My family relies on having our food delivered specifically because of our less-than-ideal financial situation. We don't do this because we're rich.

My three-year-old saunters up to me carrying an empty paper grocery bag, straining his little muscles under imaginary weight. He knocks on an invisible door, which is conveniently placed right between us. I swing it open and say, “Hi, can I help you?” He stares up at me, and in his best grown-up voice he says, “Hi, I’ve just got some groceries for you!”

For little kids, imaginative play often directly imitates life. In my child’s life, at least right now, groceries show up at the door in the hands of a stranger. And while you might think that only well-off people use the convenience of grocery delivery services, that isn’t always the case.

My family relies on having our food delivered specifically because of our less-than-ideal financial situation.

A few years ago, I started hearing about people in bigger cities getting groceries delivered through a couple of new companies. Of course, paying someone to bring your groceries home isn’t a new phenomenon, but companies like Instacart and Shipt typically use an app to streamline the process. At the time, it sounded ridiculous to me, just another layer of luxury in the lives of the comfortable. Such things weren’t even available in my city yet, and at the time I lived within walking distance of a small grocery store and wasn’t yet a parent. It was very easy to pass judgment.

The image of grocery delivery as a luxury isn't helped by their advertisements, which all feature well-dressed people who could buy their own groceries if they weren't so busy! They clearly don’t want you to associate their services with poverty or hardship but with happy middle-class people who can simplify their lives by avoiding this one, tedious chore.

But that’s advertising. And in advertising, almost everything in America is marketed towards the middle class, because we like to pretend that middle class means the same thing as “normal.”

While I’m sure many well-off people use grocery services for their convenience, assuming they’re the only ones relying on such services ignores another major demographic. I’m talking, of course, about poor people who struggle to get to the grocery store.

While I’ve been low income for most of my adult life, I haven’t always needed help getting my weekly groceries, even though I couldn’t afford a car. In my twenties, I was single, which meant that I could carry most, if not all, of what I needed home from the store in one trip. Using a backpack helped. I also, and this is key, was able to afford to live within walking distance of a decent store.

When I got married and suddenly lived in a household of two rather than one, we needed more food, but we managed to make it work. Unfortunately, gentrification and rising rents pushed most low-income people out of that neighborhood — myself included. A longer commute to the store meant either biking or taking the bus, both of which complicated things considerably.

Then I had a child. Once he started eating solid foods, we needed enough food to feed three people, one of whom had a voracious appetite. And our budget was tighter. And time was tighter. And we lived further away from any stores.

For a while, we managed to get by borrowing a neighbor’s car occasionally (to drive to the further away store with a better selection) and walking to the nearest store (a twenty-minute walk with a terrible selection) the rest of the time. But with my spouse working and me freelancing, every grocery trip represented a loss of income.

Eventually, we had to concede that something we had previously considered a frivolous luxury was suddenly a necessity.

The fees were still hard for us to afford, but balanced against the money we were losing every month scrambling to figure out how and when to buy food, delivery suddenly seemed like the lesser of two evils.

Ideally, I would get all of my produce and dairy from the local farmer’s market, my dry goods from a local independent grocer, and buy bread at the lesbian-owned organic bakery. But the reality is that we don’t live in an ideal world.

For most of us, buying food is often a compromise between what we would like to do and what we can do.

Now, almost every week, I sit down to place our weekly grocery order online. I rotate between two different stores to get the best prices for items we use all the time. I’d love to say that it has streamlined my life and that I’m as happy as the busy parents in the grocery delivery commercials, but that would be a lie. The reality is that it’s still a pain in the ass — just a slightly less time-consuming pain in the ass.

When the groceries are brought to my door, I am always overwhelmed by feelings of guilt and embarrassment. As someone who grew up working class and has been low income for most of his adult life, I get squirmy about other people doing things for me. As I watch the shopper wrestle with a tangle of bags, I wonder what they must think of me. Do I look like another comfortable middle-class parent, willing and able to pay a monthly fee and a delivery fee to avoid the annoyance of going to the store? Do they think I’m lazy or selfish?

I want to give them an explanation, to show them the factors involved in our decision rely on other people bringing us food. But they are in a hurry to get on to the next job, and I’m busy too, so I just say, “thank you.”

No matter how complicated my emotions are, this is what I do to keep food on the table. So, my kid will keep playing "delivery person," and I will keep wondering what everyone else thinks of us.