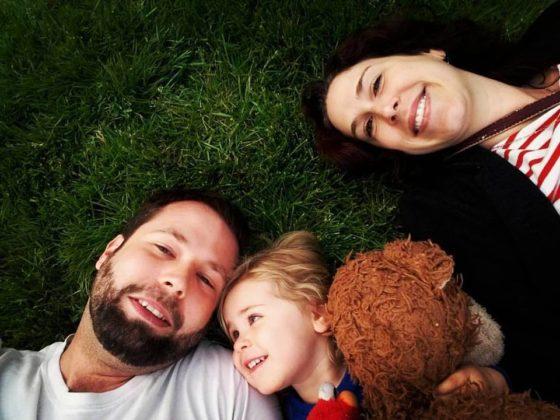 Women of a certain age often describe my husband as a gentleman. I met Jason at a graduate school party, a party I threw at my apartment in Columbus, Ohio, a party where, after people had gathered into clusters of conversation, I found myself looking for a place to sit. Jason was sitting on my couch—a purple sofa with geometric-patterned throw pillows that I thought looked “adult”—and when he saw the nervous expression on my face, he moved over and invited me to sit next to him.

Before coming to our MFA program, Jason had worked as a journalist in rural Alabama. A progressive reporter in a conservative place, he was practiced at soliciting information without giving his own opinions away. A true listener, though his thoughtful attention might pacify you, might mask that he was listening for your contradictions, your rhetorical slips. Holding eye contact behind non-hipster, wire-rimmed glasses, smiling only slightly within the density of his dark beard, Jason listened to my answers about where I was from and what kind of writing I did. When I told him that I wanted to write a memoir, he said with coy curiosity but not malice, “What makes your life so interesting?”

I pretty much fell for him then and there. My family agreed. When we married five years later, my father pulled me aside just before we walked down the aisle and said, “Hon, don’t screw this up.” He did not mean the staircase I was about to navigate in my gown.

Lucky is a word people often use with respect to my marriage.

According to Gary Chapman’s theory of the five love languages (which I find dubious, but easy to apply here), Jason shows love in “acts of service.” Last week, for example, I returned home from a five-day work trip in Reykjavik, Iceland, and found our apartment cleaned, our bedroom rearranged to make more space for my home workouts, and an art project he’d made with our 3-year-old daughter in which they painted plywood signs with cute phrases Benna had said while I was away.

I never worried about having a child with Jason because I knew he’d be what we in America call an “involved father.” He changed diapers and mastered baby-wearing and when I was anchored by breastfeeding to the couch, he cooked and cleaned and kept my snack basket and water bottle filled. When Benna was two months old and I was offered a tenure-track teaching job in Boston, he stayed home with our daughter for almost two years before going back to work full-time himself. He even recognized his male privilege during those delicate years when I swam through the guilt of working while he floated along his domestic days, the waters of liberal New England society parting every time he left the house with Benna. He may have been a gentleman, but never in his life had so many doors been literally opened for him.

But according to a study by Pew Center Research published last year, Jason’s attitudes about parenting may no longer be uncommon. Men report that fatherhood is an increasingly large part of their identities—52% of working fathers even echo their women counterparts about the struggles of work-life balance, suggesting that while women are still professionally taxed more for having children, the emotional difficulties of working parenthood are becoming equitable among the genders.

Academia is rife with stories about women being taken less seriously after they have children, being pushed into service roles instead of leadership, and especially being punished as job candidates. I’ve heard some of these stories from the women who’ve lived them. But I’ve been fortunate beyond measure not to have them myself, to have the opposite kind of stories, in fact.

During my campus interview for the job I have now, the chair of the search committee arranged my meetings around my breastfeeding needs, canceling anything superfluous to assessing my candidacy. He told me stories of his wife, also an academic, defending her dissertation while nursing, and of his own sleepless nights rocking his newborn son before going to teach his classes in the morning. After I was hired, he confided that one of the things he loves most about having kids are the limits they impose on what would otherwise be a job that sprawled to fill every free moment he had. The chair of my department also has children in whose lives he wholly participates, and who cooks and cleans in equal measure to his wife, who is—you guessed it—also a successful academic, now a vice provost at her university.

Lucky is how I’d describe my professional life.

Because while the research supports my experiences with “the new man”—a term coined in the 1980s to describe men who embraced domestic life—the Pew Center research also suggests that even though American men take their family lives more seriously than ever, American attitudes toward gender and childcare either remain the same or are backsliding into reverence of the traditional, with a public belief of 51% that children fare better when their mothers stay home instead of work, compared with only 8% who believe children fare better when their fathers stay home instead of work.

I’m happy to take issue with self-reporting surveys and their questionable data methods, but we are certainly living in an age where enough Americans wanted to turn back time that we elected Donald Trump president on a campaign with “again” as its cornerstone. We’re watching women’s healthcare issues being decided by rooms of white men. The Handmaid’s Tale on Hulu feels like a full-color warning to women that their freedom is always tenuous, always in the hands of another gender from whom we are either granted or restricted from autonomy.

As a writer and active social media user, I struggle with my representation of Jason.

When I posted photos of the plywood art project Jason did with our daughter, the post received 161 likes and a slew of comments that suggested my husband is an outlier, that I am lucky— blessed, one wrote—to have him.

As a writer and active social media user, I struggle with my representation of Jason. My love language is, unsurprisingly, “words of affirmation,” so it’s natural for me to praise and appreciate him online, particularly because those who show love through service often do so in obscurity (ask any woman on her office’s version of the party planning committee).

I enjoy publicly recognizing my husband for being an excellent partner and father. But I worry about making him exceptional.

On The Handmaid’s Tale, we see a flashback to the political buildup before the Gilead coup—women suddenly forbidden to work, having their bank accounts frozen and turned over to their husbands. Offred’s husband, Luke, consoles her by saying that he’s going to fix things, take care of her, a statement Offred’s friend Moira immediately calls out, recognizing that Luke’s gentlemanly offer is ultimately paternalistic—that gentler, more protective manifestation of patriarchy. It’s also an important reminder that an equitably responsible life between a man and a woman should not be seen as a rare wonder, but an expectation.

For Mother’s Day, Lindsay King-Miller pointed out the hypocrisy of a culture that idolizes motherhood while treating mothers terribly. I would add that we also downplay the importance of fatherhood while practically deifying fathers who show more than basic competence at caring for their families (and simultaneously emasculating those men by calling them “pussy-whipped” or telling them to “man up”).

This Father’s Day, I want to celebrate what’s truly exceptional, individual, about Jason and his parenting—the way he applies his geometry skills to sand castle-building, the elements of our partnership that aren’t about household management but our shared love of language, the wonderful strategies from teaching that he brings to fatherhood. But kindness? The ability to clean a house or cook a meal? The willingness to spend a few hours doing crafts with his daughter? These behaviors shouldn’t be the exception; they should be the rule.

To do otherwise, I think, is to take a great risk. Accepting our personal “luck” in having men like Jason might mean pacifying ourselves into a world where even they cannot save us.

If you like this article, please share it! Your clicks keep us alive!
Tags
men
feminism
fatherhood
parenting
responsibility
gender roles