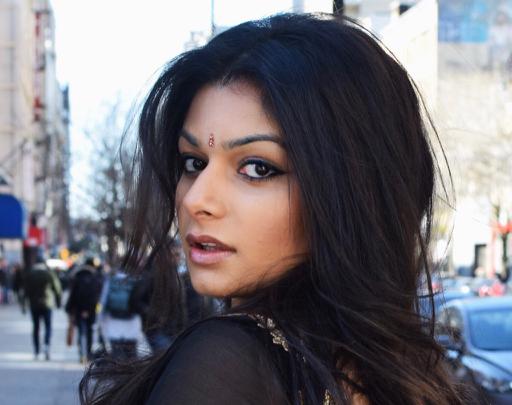 “Have you found any nice boys?” my grandmother Veena, asked while making us chai during my recent visit to India.

When I reminded her that I went to fashion school, where I could barely find any straight boys, she followed up with “should I start looking for you?”

I'd just turned 20, was about to enter my third year of college, and still phoned my dad when something broke in my apartment. I was nowhere near ready to settle down with a husband. But in my grandmother’s eyes her oldest granddaughter needed her help to meet suitable bachelors.

Growing up as the only minority in an all-white Catholic School where I was teased for my ethnicity made me separate myself from my Indian culture, especially when it came to dating.

“Grandma, arranged marriages are so old fashioned,” I told her, trying not to add fuel to her fire.

“Sweetie, they’re not as traditional anymore. Look at your parents, even look at your Grandpa and me,” she said.

My parents had an arranged marriage twenty five years earlier when my mother was my age. Both families were from the same town in Punjab, a state of Northern India. Their first meeting was set up by a mutual friend.

“It was at the Taj hotel in Delhi,” Grandma Veena recalled. “Your mom said no to a few men before. She was set on not moving to the U.S. But we heard a lot about your father and he was from a good family, so we convinced her to meet him.”

They instantly hit it off and were engaged after three weeks. For months before the wedding, my dad was flying back and forth between India and the U.S. to complete his residency after finishing medical school. During the time he was abroad, they communicated through letters.

Twenty-five years and two kids later, they lived in the suburbs of Chicago and were happier than any other couple I’d come across.

“Unlike you kids, we were taught how to love,” my grandmother continued, adjusting the shawl of her light green Indian outfit. “Our marriages didn’t begin with pleasure. Instead, we built it over time. If we had a problem, we wouldn’t just run away. We fixed it together because we made vows for a lifetime.”

As she was talking, I thought about how rebellious I’d been, from throwing parties in my parents’ Chicago apartment to getting a tattoo using my fake ID. Growing up as the only minority in an all-white Catholic School where I was teased for my ethnicity made me seperate myself from my Indian culture. Especially when it came to dating. I typically went for WASPy, light haired, and fair skinned boys. I wanted the high school version of Priyanka Chopra and Nick Jonas.

I transferred schools and we moved to a much more diverse community.

Moreso when it came to romance, making an arranged marriage the farthest thing I could see myself doing.

But then, I moved to New York City and studied at Parsons School of Design, which had a ratio of 70% girls to 30% boys (who were most likely not looking for a nice Indian girl to marry).

Knowing that my small school was only a few blocks from New York University, Grandma Veena asked, “what if you stand outside NYU?”

I laughed at the thought of me standing outside the school holding a sign that read: Looking for a boyfriend my Indian grandma will approve of.

I had short-lived flings in the past like the tall, Brazilian male model who asked me to decide which of his photos would look best on Instagram. I went out with a blond investment banker whose conversation put me to sleep. There was a freeloader who was convinced he loved me when his real passion was with my apartment. When I told my grandma, I emphasized that he was half Indian, not mentioning the using me for my money part.

I reminded her I wasn’t even legally allowed to drink yet. Still not convinced, I showed my grandmother the dating apps on my phone and told her how I’d been on a few dates with some of the guys, but nothing stuck.

“This one lets you see their religion, and you can decide what height range you want,” I explained.

“If it’s that selective, what’s the difference between having us look for someone for you or using one of these websites?” my grandmother asked.

I realized she had a good argument. In some way most marriages are arranged, whether it is through a dating app, friends setting you up, or in my case, Grandma Veena scouting for my future husband. We all seek out a lifelong partnership with someone possessing similar values.

Weeks later, I flew back to Manhattan. Out of boredom one night, I started swiping left and right on Bumble. When I came across a handsome Indian medical student, as if Grandma Veena had sent him herself. He was 23 and visiting from London. After messaging back and forth, I agreed on a date.

Thinking it wouldn’t be longer than an hour, I made plans to meet friends later that evening. I chose a Spanish restaurant close to my apartment. He was tall, had caramel skin like mine, and boyish good looks under a short scruffy beard. It didn’t take long to warm up to him. Ten plates of hot tapas and two bottles of wine later we’d chatted for over two hours, never once picking up our phones. We talked about his parents in London and our travels to Delhi, his decision to change from pharmacy to pre-med and my parents’ support in letting me study fashion. For the first time, I shared the struggles I had during my American school years.

“I used to get picked on any time I brought my mom’s palak paneer,” he told me. “Kids called it smelly, but I guess they just couldn’t handle the flavor.”

“My classmates thought Gandhi was my grandpa,” I told him.

I felt relieved knowing that there was someone who dealt with similar situations. After dinner, I took him to meet my friends for drinks. The connection we had was different from any other date I’d had.

He went back to the UK and we lost touch, but I called my grandmother to tell her about the date. She opened my eyes.

While I’m nowhere near ready to settle down, I am open to the possibility of being set up with someone my family picked.

In reality, there was not much difference in swiping on an app than Grandma Veena choosing my husband. But before she got too excited, I mentioned one rule: he didn’t need to be Indian, as long as he grew up with good values and could handle his spices.

If you like this article, please share it! Your clicks keep us alive!
Tags
matchmaker
matchmaking
dating
cultural connection
Indian
grandmothers

How My Indian Grandma Became My Matchmaker
Taara Mehta