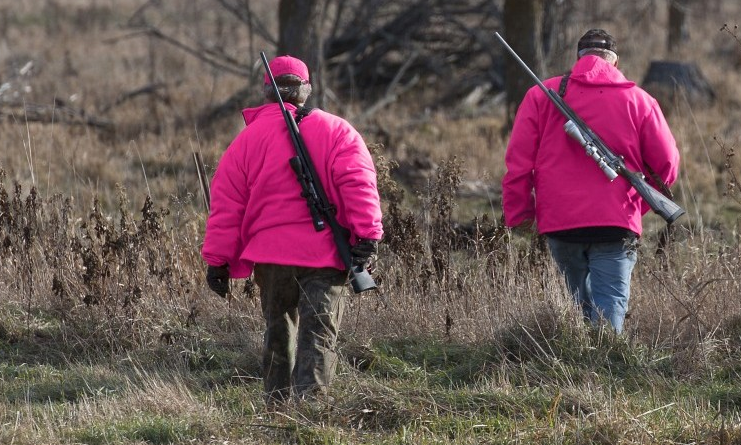 "Why does it matter what neon shade you don to be more visible to your fellow hunters so they don’t shoot you like a deer?" Image: http://community.deergear.com/

This week in “You Need A Law For that?” news, the great state of New York has passed legislation officially recognizing hot pink as a designated color for hunting gear. New York is the third state, after Wisconsin and Colorado, to add pink as an acceptable accent color, in addition to the usual “blaze orange” that hunters wear for visibility.

As is usual in cases of consumer products being pinkified to appeal to women, there are a lot of questions. Questions like: why does it matter what neon shade you don to be more visible to your fellow hunters so they don’t shoot you like a deer? And why does the state legislature care what shade of neon you don to make sure your fellow hunters don’t shoot you like a deer?

For answers to these questions, I turned to my friend Chris, who is both a hunter and a New Yorker. Apparently, hunting safety is a big enough thing that there are a bunch of laws governing it, including one that says you need to wear 60% blaze orange gear when you’re out stalking deer in the autumn woods.

There are several reasons that blaze orange has been selected as the default hunter safety color: one, game animals are never blaze orange so there’s no confusion. If it’s blaze orange, DO NOT SHOOT IT. Two, it’s highly visible to the human eye. Third, it’s TOTALLY INVISIBLE to the eyes of deer, who apparently see the world in shades of gray*.

The same can be said of very bright pink, apparently, but the state is only just now getting around to agreeing to those points. My friend says there has been extremely cool looking pink camo stuff available for sale — along with a market for such stuff — for quite a while, but technically no one was allowed to wear it while hunting.

The new law changes that and opens up a whole new world of accessorizing for hunters.

*According to my friend, deer are the only commonly hunted animal you can play hide-and-seek with in the woods. Bears see the same color spectrum as humans. Yes. That’s right. YOU CANNOT HIDE FROM BEARS. You also can’t outrun or out-climb them. Bears will find you and fuck you up. Stephen Colbert was right: bears are godless killing machines — and they have no respect for either blaze orange or pink.

If you like this article, please share it! Your clicks keep us alive!
Tags
hunting
pink
deer
New York
gender