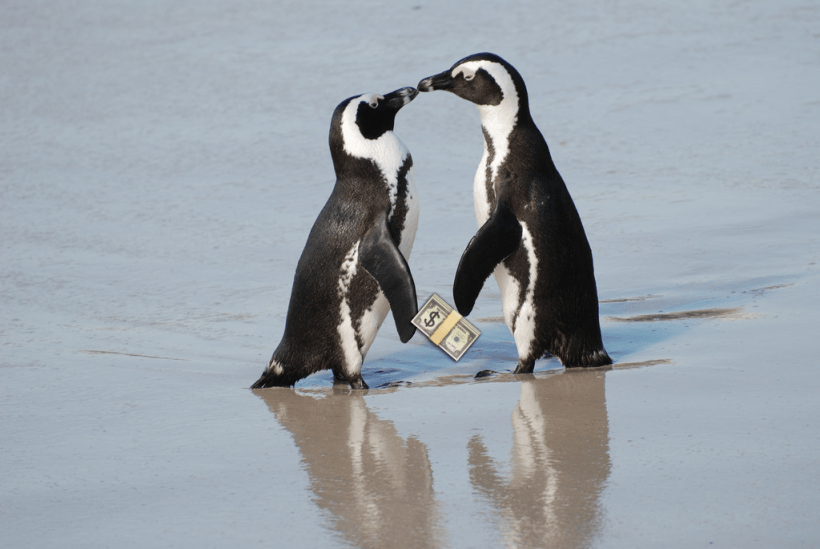 Sorry, Cole Porter. I won’t do that to your lyrics again.

But! The fact remains that people aren’t the only ones who exchange sexual favors for material gain! You know how humans sometimes put out in order to pay their rent? Well, penguins put out to get building materials for their nests.

According to the best article I’ve read all day, there are apparently multiple examples of animals who take money for sexual favors. Penguins, as I mentioned, do it for pebbles. They use the pebbles to build their nests and female penguins will mate with the males who have a ready supply of pebbles so they can get some to take home afterwards.

Bonobo chimps will sometimes trade fruit for sex. They will also use sex as a greeting and have make-up sex to resolve conflicts, so I guess it’s not a surprise that they would also have sex for goodies.

Capuchin monkeys who participated in a study to see if they could learn to use currency proved that yes, they could. And yes, they could also use the coin-like metal disks to pay one another for a little action.

And great gray shrikes — which are little birds of prey - want a meal before sex. Specifically, female shrikes want a freshly killed animal impaled on a stick and tossed at their feet for inspection. If the kill is deemed worthy, the hunter gets lucky.

All this exchanging of goods and services in the animal kingdom just reinforces that sex is a commodity that has real value. If someone wants to sell it or barter for it, more power to them. It’s only natural!

If you like this article, please share it! Your clicks keep us alive!
Tags
Sex
wild
animals
prostitution