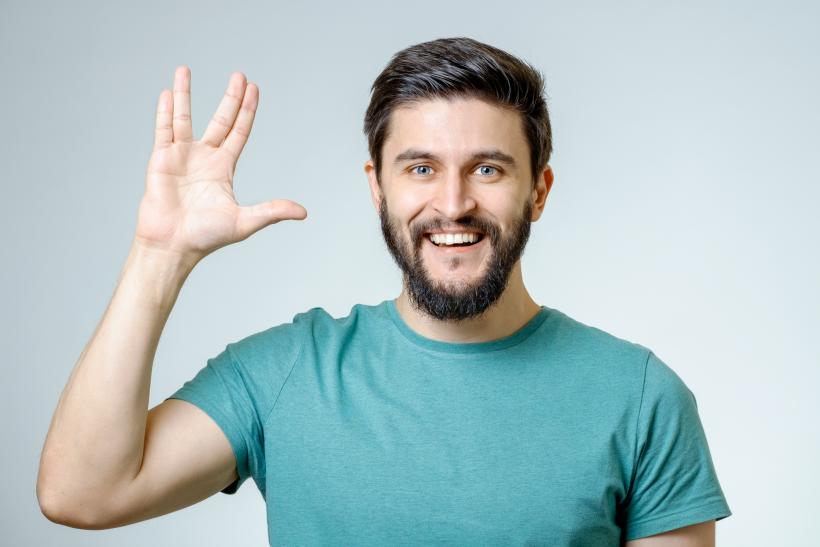 It was always about Spock for me. He wasn’t supposed to be hot, but to me, he was (and is) BANGIN.

Call me crazy, but I have a distinct suspicion that my love of Spock sparked my affinity for emotionally unavailable men.

When I say I was madly in love with Spock, I don’t mean that charmingly not-weird-enough Spock from the new Star Trek movies (though Zachary Quinto is totally still super hot). I’m talking about the original Spock from the classic Star Trek series, played by Leonard Nimoy (RIP, sexy).

ICYMI, Spock is the emotionless sidekick (read: starring man of my heart) of Captain Kirk (William Shatner) from the planet Vulcan. They embark on a variety of adventures along with the rest of Kirk’s crew, wherein they defend and defeat all kinds of aliens.

The show sets you up to be apeshit over William Shatner. He’s hot, young, charming, and fearless. He is totally a dreamboat.

Spock is there to offset Kirk and make him look good. Since the death of Leonard Nimoy, Spock has finally gained some of the recognition he deserves as a sex symbol, but when I was a young child, my infatuation with him was not understood by any means.

He was not a character designed to set me on the burgeoning path to puberty. Me, my brother, and my dad used to watch the old series growing up. I’ve seen every single episode at least twice. I first learned about the ways of love, manhood, and other bullshit from the original Star Trek.

The media has a far more profound effect on us than we might think. I spent much of my childhood fawning over episodes of Star Trek. Therefore, Star Trek shaped my love life.

It was always about Spock for me. He wasn’t supposed to be hot, but to me, he was (and is) BANGIN. I was instantly in love from age 6 or 7. He was coy, apathetic to all female advances, monotone, mysterious, and just all around not into anything romantic. He had, like, all the chill — but also no chill. I distinctly remember the one episode where he got some action. He was lost on a planet made entirely of ice (or something) and wound up naked with an impossibly gorgeous snow lady. I — no joke — think I grew tits the next day.

What’s so interesting to me (and possibly you, but you’ll have to decide that for yourself) about my Mr. Spock obsession was how he set me up to wind up in a series of relationships with uninterested, hot-and-cold people.

According to Attachment Theory, our primary and secondary caregivers shape who we are and who we fall in love with as adults. My mother and father are both doting, loving, wonderful people who showered me with a ton of love and support. Meanwhile, my dating history is a patchwork of shitheads.

My Spock-love makes me wonder about how our first celebrity crushes can impact our romantic choices as adults. It makes sense to me. We take all of these impressions we’ve picked up over the years and carry them with us into our dating life. The media has a far more profound effect on us than we might think. I spent much of my childhood fawning over episodes of Star Trek; therefore, Star Trek shaped my love life.

I loved Spock because he had women (and I think men too?) eating out of his hand. He was the master of playing hard to get on television.

You wanted him because he didn’t want you. The original fuckboy, if you will.

Every person I dated was essentially Mr. Spock. If he was emotionally distant and cold, I assumed that meant he was super into me. What I deemed sexy were all Spock-like characteristics, nevermind that Spock was only half human. The less someone wanted me, the more I wanted him. Looking back, this is kind of embarrassing. Now that I'm approaching my late twenties, I've cultivated the self-worth to expect to be treated like a queen. Thanks, mom and dad. Better late than never.

But this theory of mine strikes a chord, doesn’t it?

Unpopular opinion: Mr. Spock is every fucked up person we date in our 20s. They care about no one and act largely out of a sense of disaffected duty, but they have redeeming moments of tenderness. Just like watching Spock on screen, you cling to those soft moments, praying that you’ll be the one to change a fuckboy or fuckgirl for good. You amplify those moments of tenderness and breathe new meaning into them.

We’ve been conditioned to gravitate towards the emotionally unavailable because that’s how we’ve been told to perceive romantic interest.

We’re told, “If he’s mean to you, that means he likes you.” You know what I’m talking about. I’m not saying all of this links directly back to Mr. Spock, but it is an interesting example of the impact social conditioning and popular culture can have on a child.

Perhaps this Mr. Spock Element is dubious at best. Maybe I’m simply making excuses for my historically shitty taste in partners. My taste has since improved and I no longer get anywhere near fuckpeople. There is nothing cute about someone who isn’t obsessed with you. We’re a little too old for games, aren’t we?

That being said, I will love Mr. Spock until my dying day.

If you like this article, please share it! Your clicks keep us alive!
Tags
Star Trek
pop culture
spock
sexuality
dating
Relationships
fuckboys