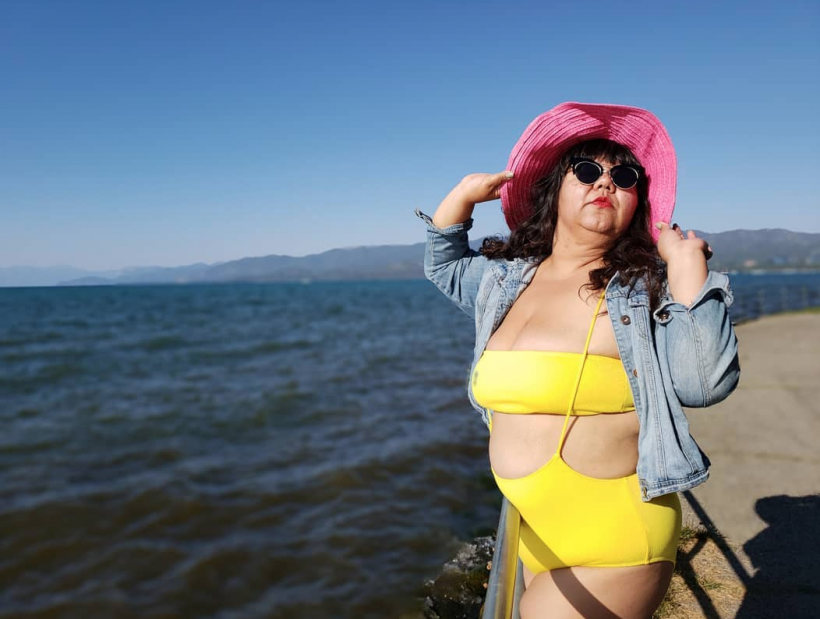 Bodies look different when they move, laugh, run, wiggle, walk, swim, sit, and have sex. No two bodies are exactly the same, and this is something worth celebrating. In our culture, which rewards homogeneity, this diversity of motion can be a cause of anxiety, however. Especially if you're fat.

I remember a particularly embarassing moment when someone told me that my body moved incorrectly. I was a clarinet in my high school's marching band (because: fat brown nerd), and the band director told me I needed to hold my body in while I was marching because I was jiggling too much. He, of course, yelled this in front of everyone while we were practicing outside and I went about attempting not to fucking jiggle while balancing a stupid hat, playing Killing Me Softly, and remembering coordinated footwork.

His words were humiliating but fed into a sense of wrongness I had felt for years since being introduced to fatphobia at age five.

Many people have shared with me that they feel discomfort with either how their fat body feels or how it looks — especially in motion.

Some people say that they're surprised when they see a video of themselves because they look differently than they thought they did and it makes them feel shame.

Some people say that it makes them physically uncomfortable to feel their stomach pop out when they sit or lie on their side.

It's unfortunately pretty normal that we don't know how to navigate how we look, feel and move because there are few positive representations of fat people in mainstream media, and the way our bodies look — moving or standing still — is considered intrinsically comedic because of anti-fat bigotry.

Case in point: a few years ago I was just sitting on the MUNI and a bunch of teenagers got on the train, sat in front of me, and began taking selfies. They huddled together and started cackling. I caught a glimpse of what was so funny — a zoomed in image of my face as I read a book. Just the sight of a fat person is considered grounds for derision.

If we lived in a culture where all bodies were considered equally valid and valuable, many of these instances of reported discomfort would not register as shameful or anxiety-inducing and would simply be neutral or would call for an accessibility check-in.

I'd like to advocate for 3 things we can do to normalize our fat bodies for ourselves:

1. When you feel uncomfortable about what your body looks or feels like, don't jump to the conclusion that it's because there's something wrong with you.

We get cues from mass media and peers around whose body looks "normal" — thin, young, able-bodied people.

We don't have a lot of models of embodied fat existence. When our body looks or act differently than we expect we may ascribe a sense of wrongness to our bodies. This is an internalized fatphobic response. Instead consider that this is just what your body looks like when it's doing x. It can just be a neutral fact.

2. When you feel physical discomfort, check in and ask yourself if your body needs some accommodation.

I remember how ashamed I was of my inability to do certain poses during yoga or having difficulty adjusting my body during sex.

I have a belly and there have been times where my belly needs to be moved for clitoral access or just to get closer to my partner. In the past the idea of just telling my partner to pick up my stomach or picking it up myself was unthinkable. I would have rather died from shame than had sex that felt comfortable. Nowadays I tell my partners to move my fat when they need to access stuff that's going to make me feel good.

Similarly when I'm wearing something that pinches or bunches, rather than blame myself for not "fitting" into clothes I just unzip or adjust or remove or do a little bit of tailoring. Clothes are supposed to work for you, not the other way around.

3. Take More Videos & Photos of Yourself

Take videos of yourself doing the stuff you love doing even if you're scared to see your body doing it. Do it a lot. The discomfort phase might last a while, and that's ok. Let yourself have all the feelings, but keep doing it until it starts to feel less terrifying.

I did this kind of training with my voice. Most people feel surprised when they hear a recording of their own voice. They often feel embarrassed. I used to. I decided I wanted to be able to listen to interviews I'd done without the distraction of shame. So I started recording my voice all the time and playing it back. Now I don't even think twice about hearing my own voice, and I can focus on what I'm saying not what I sound like.

Bodies of all sizes do amazing stuff all the time. Don't let fatphobia hijack your body's right to exist in all its vast complexity.