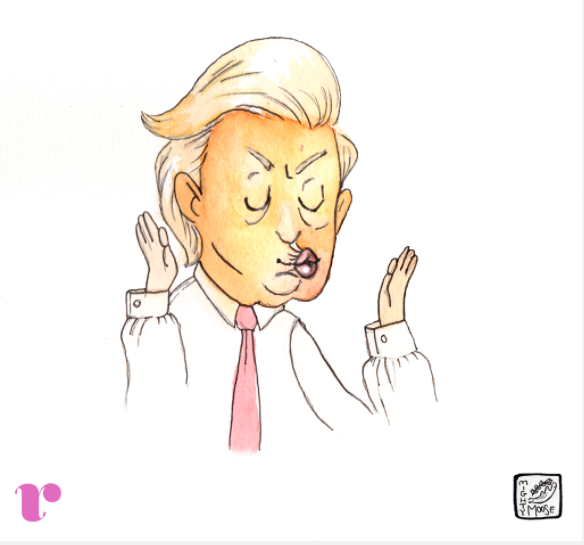 As the New York Times’ just-happened interview with Trump shows, the guy remains ever unable to give a simple, on-point answer.

Before the election, Donald Trump the candidate sat down with the editorial board of The Washington Post. The paper had not been friendly to Trump. (Its masthead now reads “Democracy Dies in Darkness,” new since the Nov. 8 vote.) So who knows which brilliant adviser encouraged Trump (Trump, probably) to chat with a mostly hostile crew of sharp and informed opinionists.

Whatever the case, the take-away from that 2016 sit-down was simple: Trump the man was incapable of carrying on a sustained train of thought. I remember reading the transcript, baffled at first by the sheer incoherence of his ramblings. That befuddlement morphed into a giant, all-caps question in the ol’ brain:

WTH IS THIS GUY DOING AS THE NOMINEE OF THE GOP?

To that, there is no good answer. But as to Trump’s ability to kick it with top-notch op-ed crews, becoming POTUS hasn’t changed a thing. As the New York Times’ just-happened interview with Trump shows, the guy remains ever unable to give a simple, on-point answer.

This would be amusing, if not for the stakes. But actually, since the stakes are so spectacularly high, maybe we can excuse ourselves for a laughing. At least a little. Comic relief: it is a thing. So I present:

Trump, In His Own Words

On passing healthcare repeal and/or replace:

“So, we have 52 votes. Now, I guess we lose Susan Collins. I guess we lose Rand Paul. Then we can’t lose any votes. That is a very tough standard. Statistically, you want to bet on that all day long.”

Don't we NOT want to bet "all day long" on a bill that requires zero out of fifty lost votes? Has this man been to any of his casinos?

On his meeting French President Macron:

Really? Let’s watch that beautiful bonding footage, and see what says the viewer:

On this parade in France that was a bigly deal.

“But the Bastille Day parade was — now that was a super-duper — O.K. I mean, that was very much more than normal. They must have had 200 planes over our heads. Normally you have the planes and that’s it, like the Super Bowl parade. And everyone goes crazy, and that’s it. That happened for — and you know what else that was nice? It was limited. You know, it was two hours, and the parade ended. It didn’t go a whole day. They didn’t go crazy. You don’t want to leave, but you have to. Or you want to leave, really. These things are going on all day. It was a two-hour parade. They had so many different zones. Maybe 100,000 different uniforms, different divisions, different bands. Then we had the retired, the older, the ones who were badly injured. The whole thing, it was an incredible thing."

Now ask yourself: when was the last time you got this excited about a parade? Years? Decades? Never?

In his interview with the NYT, Trump had "musing about having a military parade down a main avenue in Washington"

"She actually called me, and she said, um, 'You know, I think we get along very well.' I said we do, we really do. I said, 'You gotta put more money into NATO,' No. 1. And No. 2 is like, our trade imbalance is ridiculous. You know, it’s a money machine."

On Napoleon, Hitler, and, tangentially, why this country really needs to up its history education game:

"Well, Napoleon finished a little bit bad... And his one problem is he didn’t go to Russia that night because he had extracurricular activities, and they froze to death… Same thing happened to Hitler. Not for that reason, though. Hitler wanted to consolidate. He was all set to walk in. But he wanted to consolidate, and it went and dropped to 35 degrees below zero, and that was the end of that army. [crosstalk] But the Russians have great fighters in the cold. They use the cold to their advantage. I mean, they’ve won five wars where the armies that went against them froze to death. [crosstalk] It’s pretty amazing. So, we’re having a good time. The economy is doing great."

I don’t even need to contextualize or comment on this, because no amount of snark can compete with this level of presidential ignorance and asininity. Forget the historical inaccuracies and the bold and unapologetic non-sequiturs. Can anyone, ever, just own bullshit the way this guy does?

On his undisclosed meeting with Putin at the G20:

Trump apparently wandered down to greet his wife later (why were they sitting, like, miles apart at this gargantuan table?). So the "secret meeting" was really just two dudebros whispering in a cavernous dining room where others were, apparently, present? I'm confused.

On his ex-bff, AG Jeff Sessions:

BAKER: Was that a mistake?

TRUMP: Well, Sessions should have never recused himself, and if he was going to recuse himself, he should have told me before he took the job, and I would have picked somebody else.

HABERMAN: He gave you no heads up at all, in any sense?

TRUMP: Zero. So Jeff Sessions takes the job, gets into the job, recuses himself. I then have — which, frankly, I think is very unfair to the president. How do you take a job and then recuse yourself? If he would have recused himself before the job, I would have said, “Thanks, Jeff, but I can’t, you know, I’m not going to take you.” It’s extremely unfair, and that’s a mild word, to the president. So he recuses himself. I then end up with a second man, who’s a deputy.

TRUMP: Who is he? And Jeff hardly knew. He’s from Baltimore.

My takeaway from the NYT interview, in which he mows down Sessions--Sessions!--is that Putin remains the only ally Trump has never betrayed.

This is the most “whaaaat?!” graf of the entire NYT Trump interview https://t.co/xWQnI83Kb9 pic.twitter.com/XvKLXpKoam

On firing James Comey & the "meaning" of 'obstruction of justice:'

"He said I said “hope” — “I hope you can treat Flynn good” or something like that. I didn’t say anything.

But even if he did — like I said at the news conference on the, you know, Rose Garden — even if I did, that’s not — other people go a step further. I could have ended that whole thing just by saying — they say it can’t be obstruction because you can say: “It’s ended. It’s over. Period.”

I’d like to ask every pre-AP language starlet to diagram the above sentences, please.

6. G. He came right out and went at Mueller. His lawyers must be about to slit their wrists. INSANELY ill-advised.

Now quick, aspring English majors: write a paraphrase of this gobbledy-gook in your own words. Bonus points for inflicting some kind of clarity on it.

On Don Jr.'s meeting with Russian agents + the most amazing Freudian slip ever (emphasis mine):

TRUMP: No, I didn’t know anything about the meeting.

SCHMIDT: But you didn’t——

On the bewitched, bothered, and bewildered reaction of everyone when they see of his success (also, how Special Investigator Mueller better stay out of his finances):

"No, I think that’s a violation. Look, this is about Russia. So I think if he wants to go, my finances are extremely good, my company is an unbelievably successful company. And actually, when I do my filings, peoples say, “Man.” People have no idea how successful this is. It’s a great company."