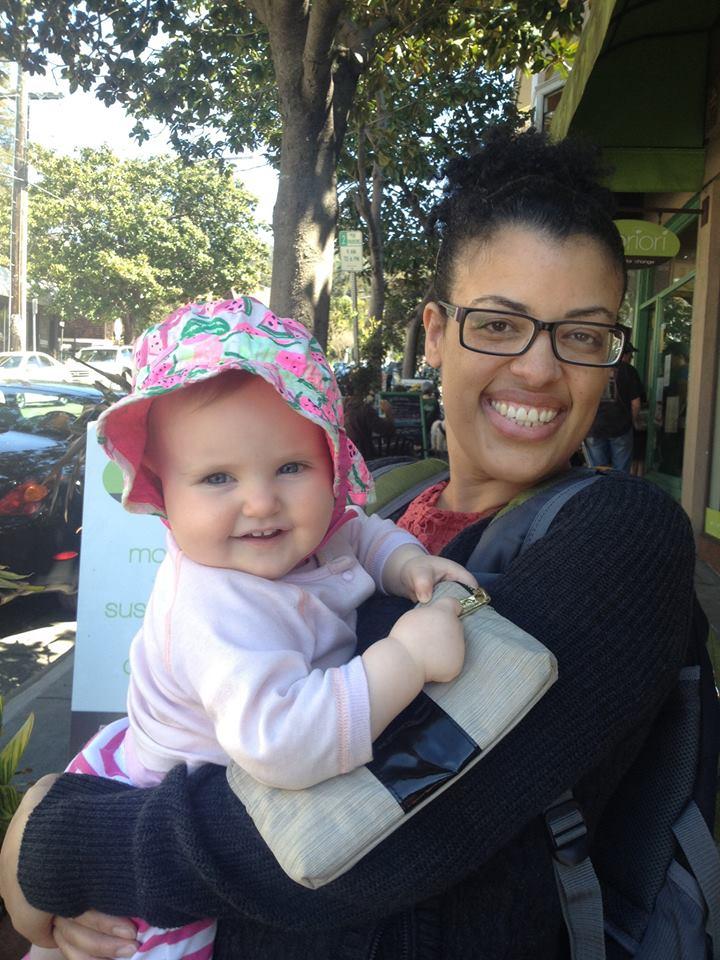 The author and her niece — so much cute!

The past three years have taken a toll on us black folk. The innocuous ritual of entering cyberspace has turned into an apple-shot of sorts. Will the click of the mouse safely graze the apple atop our heads, or will it hit our psyche with one more tale of brutality? And how many hits can we take before we fall just like those apples do?

Living alone in Los Angeles, I’ve heard all the recent incidents from the confines of my own home. In that space, I’m intimately aware of the color of my skin. After the Charleston church shooting, I was afraid to walk down a quiet street, lest I be shot by a white lunatic with a gun who rounded the corner. When I saw the video of Eric Garner being pushed to the ground by a handful of cops, my breath came short and quick. But I was in a different space for the most recent event, and I came to realize my privilege as a minority with family in the dominant demographic.

My sister is concerned about raising children under Trump, but neither of us thinks her children could be shot by police or wake up to swastikas graffitied on the front of their home.

I spent the weekend of the Charlottesville protests with my immediate family, all of whom happen to be white: my mother, my stepbrother and his new German fiancé, my blonde half-sister and her equally blonde husband and their two children. My family is extremely liberal, and I have never experienced an ounce of discrimination from them. My sister, Lisa, has looked up to me from the moment she was born — shortly after my thirteenth birthday — and her three-year-old daughter, Holly, does the same.

When people insist that mixed race babies are cuter than monoracial ones, I get personally offended. To me, Holly is the most beautiful child that ever was — not because of her blonde hair and blue eyes, but because I see her through the gaze of a doting auntie. 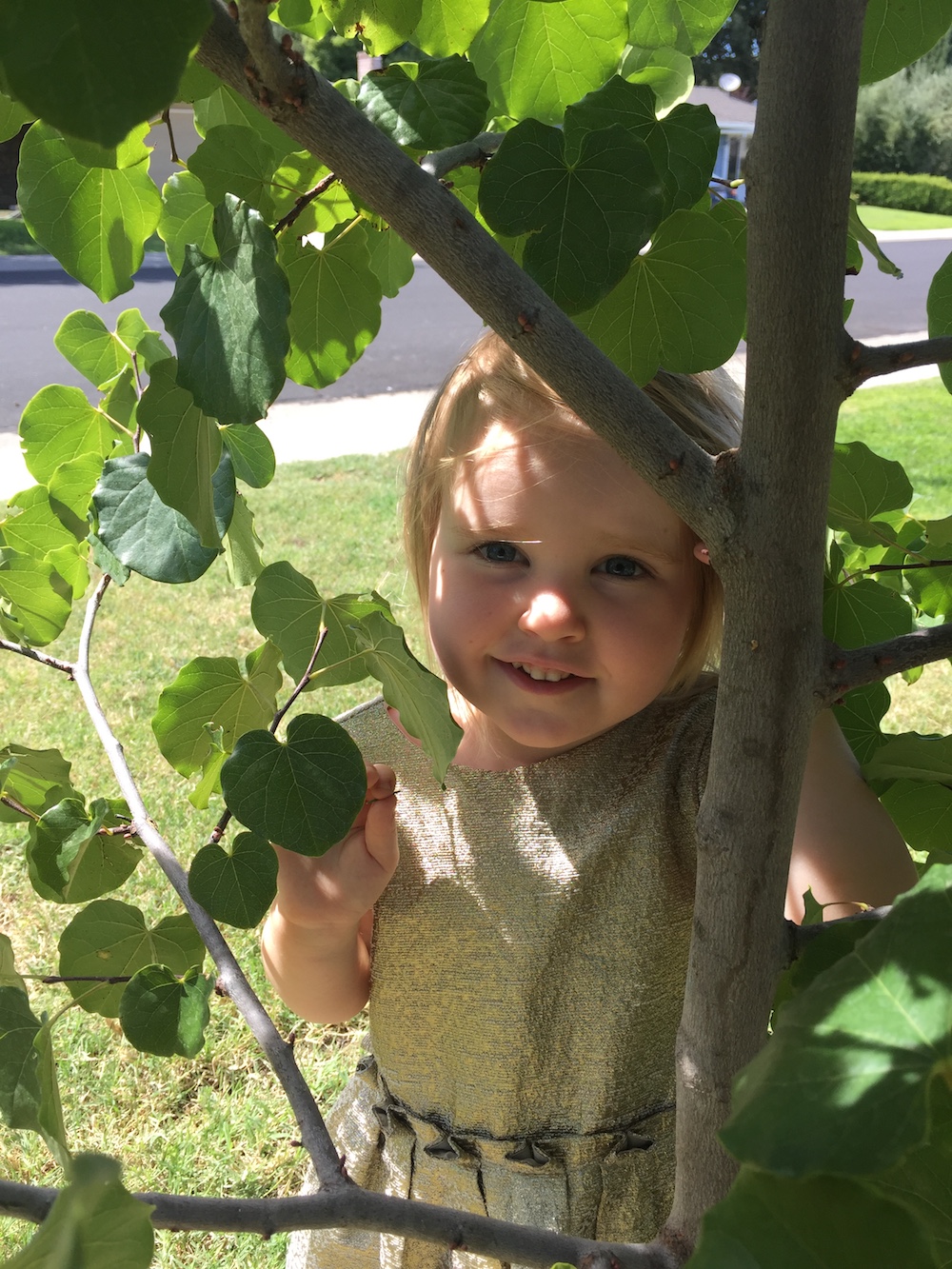 This recent visit was the first time my sister, my stepbrother Jeremy, and I had been together in almost three years. We grew up in Silicon Valley, but due to rising housing costs, we have all fled our hometown, and Lisa and her husband bought a house east of the Bay. During our visit, we watched the Gilmore Girls revival. Lisa and I looked over our great-aunt’s book-length documentation of our lineage while our mother filled in the holes. My stepbrother’s fiancé showed me a video about the first black president of the alumni association for the university at which she and Jeremy teach in Mississippi. We went to the lake, peppered with white and Hispanic families enjoying the warm weather. Dinnertime took us to Billie Hills Hillbillie Bar-B-Q — the thought of which made me slightly uncomfortable until I noticed two black patrons. But even before we went, I knew I wouldn’t experience any trouble. After all, I had my white stepbrother and brother-in-law in tow.

When I first started seeing rumblings of something occurring in Charlottesville on my Facebook feed, I purposefully didn’t investigate.

My logic was that I wanted to spend this precious time with my family without being weighed down by another assault against my people. Much of this logic made sense, as I had traveled five hours just for a long weekend. But as I read up on the events before heading home, and then drove past the billboards in the desolate farmlands that have always made me wary — I realized the privileged nature of setting aside the disconcerting current events.

I drove through the Northern California farmland slightly afraid to stop for gas. One billboard warned passersby that the police were encroaching on their freedom through fingerprinting. Another advocated that the Bible be taught in schools. Some billboards simply said, “Jesus is the answer.” None of these signs were racist, but they all came with implications that I knew all too well.

Suddenly, away from my family, I was black again.

If my family wasn’t lily white, I wouldn’t have been able to put off Charlottesville. Instead, I would have been just as worried for them as I was for myself once I left their cloak of protection. My sister is concerned about raising children under Trump, but neither of us thinks her children could be shot by police or wake up to swastikas graffitied on the front of their home. I don’t know what it’s like to raise black or brown children — to wonder how the recent events of our country will impact their day-to-day lives. My biggest worry for Holly is that her unique sense of style will be squashed, and that she’ll be pressured to stop wearing pink dresses and colorful headpieces.

When my sister’s younger child, Niall, was born this year, I was slightly afraid of being an aunt to a white male. I didn’t want him to grow up with a sense of entitlement and to see me as less than. But again, this fear is nothing compared to the worry that my nephew could be shot, discriminated against in education or employment, or be told that he doesn’t deserve the best life has to offer.

When it comes right down to it, I’m only a “half-black folk.” I’ve experienced discrimination from outside the protective confines of my family. But that family — save a member here or there — has never questioned my struggles as a minority. They are informed because they choose to be, and that in itself is a privilege that rubs off on me. They watch the news, read books about black history, and challenge those who hold racist views. In that sense, I’m a person of color with a shield of whiteness that envelops me in loving protection. I have my own army who fights against injustice. I have a mother who handed out fliers boycotting grapes during Cesar Chavez’s unionizing efforts. I have an aunt and uncle who told me never to question the importance of affirmative action.

Having white family isn’t a privilege in and of itself. To my surprise, I’ve learned that many members of the mixed race community have racist relatives, including their own parents. To birth a child and then discriminate against your own flesh and blood is something that seems inconceivable to me — but that’s because I haven’t experienced it. I called my mom recently to thank her for being so understanding and supportive of black issues. She tearily appreciated the compliment, which she wasn’t sure she deserved.

I’ll always have this unintended privilege. Being aware of it helps me realize the ways in which recent instances of police brutality and white nationalist marches simply can’t affect me to the same degree they affect others.

It shows me that there is a space of fear I cannot fully inhabit, not for lack of outside perspective. My black father never had a protective shield. He never had an army. I’ll try to be that for him as I carry on his legacy, aware of the ways he must have feared for his children during earlier uncertain times.

Saying "We Are All The Same" Will Not Unite Us

Newsflash: Not Every Dark Girl Has A Complex About Her Skin