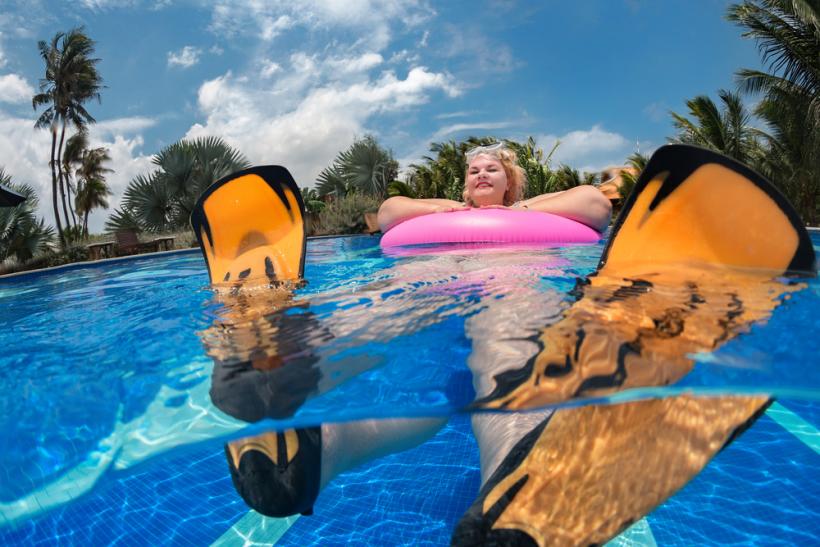 Are vacations fat friendly? It can be tiring for plus-sized people to continually have to prove that they are worthy of excitement and adventure.

As a woman who treks to the crowded train platform every morning for work, I am acutely aware of how much space I take up. I eyeball the recently vacated seat and do some quick mental math to see if my hips can fit into that limited space. Traveling for me is about continually stacking myself up against the confined space and hoping that I won’t stick out.

A few weeks ago I was excited to book my first snorkeling experience with a cruise line until the operator asked me if I was under a specific weight. I struggled to remember the last time I was weighed and if it was possible to be over the maximum. My stomach and hips felt like weights dragging me down, and a small part of me wondered if I could rush diet my way into safer waters. I felt embarrassed and ashamed to even think about it when my friends all easily answered the question. Then I thought of the people who were heavier than the maximum. Where they denied the opportunity to cross something off their bucket list?

Were all my trips destined to make me worry about how much space I'd take up?

We all know that the discussion of plus-sized traveling starts at the airport. With hashtags like #flyingwhilefat and an extreme case of a woman having the cops called on her for brushing arms with her neighbor, it isn’t a secret that people have to choose whether the convenience of flying is worth the potential for fatphobic comments, the side eye while you scoot down the aisle, or general seat discomfort. It’s getting worse too.

In recent years, airline seats have been shrinking. The average seat width has shrunk from 18 inches to 17 or under, widening the gap between people who can travel comfortably and the rest of us who don’t want to be squished into our neighbors.

Thankfully, there are many tips and tricks on the internet to help plus-sized people navigate the already stressful experience of flying.

For some, like writer Jes Baker, it is all about comfort and body positivity. She suggests wearing a comfortable shirt with a body positive message on it.

If seating is first come, first served, another option is to bring your own. Amazon and other online vendors have a few options for purchase. Either way, it’s time to stop blaming the people who need them and start questioning who gets to decide what is an acceptable seat size. Here’s a hint — it certainly isn’t the airplane industry.

But I also wonder what happens after you get off your cozy six-hour flight. The stress of traveling while plus sized doesn’t end when you leave the terminal. It can rear its ugly head in the small and limited accommodations of hotels, the specific place you decide to travel, and in the things you choose to do.

I once had a conversation with a coworker about skydiving, and she confessed how she hurt herself skydiving because of the ill-fitting harness that was “one size fits all.” She said she would try it again but only after she invested in personal equipment.

Of course, there will be instances were limitations are based on legitimate safety reasons. I’m not about to complain if I’m not allowed to ride a pony because I’m too heavy. But we need to start having a more open discussion about whether a limitation is valid or if it is influenced by fatphobic thinking. Does a restaurant need to have nothing but cramped booths and chairs with arms in your restaurant? Would it be possible to have one or two designated areas for larger individuals?

A plus-sized person’s right to go out or enjoy themselves should not be dictated on one narrow depiction of what the perfect body is.

While we pause to consider our country's portrayal and treatment of plus-sized people we should also address traveling internationally and how different cultures can react to a plus-sized form. Barring the cruise that spurned this entire article, I have never had the opportunity to travel abroad, and so I can only draw my facts from sources and the experiences of others. Like everything in this world, no two experiences are the same. They are influenced by things like economic privilege, gender, sexuality, and skin color. In Annette Richmond’s article Traveling While Fat & Black she discusses her personal experiences about traveling both in America and overseas as a black plus sized woman.

However, there is a silver lining to this constant bombardment of travel limitations and stigma for plus sized people. The more the issue is broached and discussed, the more likely people are to act.

It can be tiring for plus-sized people to continually have to prove that they are worthy of excitement and adventure.

The website Abundant Travel does an excellent job of showing that is possible to go on vacation and be plus sized — a have your cake and eat it to analogy that I am happy to get behind. This website specializes in travel accommodations for tropical destinations like Mexico and the Caribbean for plus sized people. This can include flight and hotel reservations to the excursions you might want to partake in while there. Just think of it — no invasive questions, no gear that might damage you, and most importantly a place that treats you like a person. Because the next time you see friends, family, and people you used to know posting about their latest travels, don’t think about what the world thinks you should do. Take that trip, go snorkeling or skydiving. It’ll be worth it.

If you like this article, please share it! Your clicks keep us alive!
Tags
traveling
Travel
vacation
fat
fat shaming
fatphobia