Take The Cake: Weight Gain Is Normal When You Become BoPo 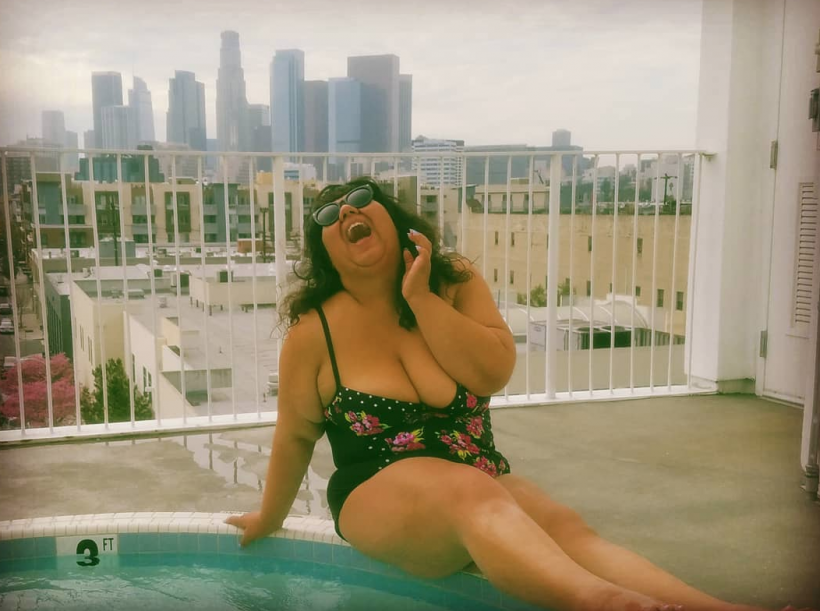 There’s this bizarre myth that pops up every now and then on my feed - the idea that through happiness or through adopting a peaceful relationship to your body that you will lose weight. I just saw a post about it on Instagram the other day, in fact: “Most women think that losing weight will make them happy when in reality being happy will make them lose weight.”

There is nothing reality-based about this statement.

This is a statement steeped in fatphobia and the mythical (i.e., not evidence-based) thinking associated with dieting. This myth relies on the idea that fatness is always a sign of emotional or psychological distress, and that once the distress is gone, then the “real” body will emerge. We know that the thin body is considered to be healthier than the fat body – both spiritually and physiologically. Furthermore, the thin body is considered more “real” than the fat body because fatness is always considered a temporary state (hence why fat people have a hard time imagining we will be fat forever and ever well into the future). Think: Oprah’s reference to the thin woman inside each fatty or that one NPR interview with Elna Baker  where her husband remarks that her now-thin body is the “real you.”

I’d lurve to set the record straight on this matter:

Being thin is not about loving yourself more than fat people do.

Being thin is not a product of morally superior habits.

Being thin is not evidence of mind-body alignment.

The topic of post-dieting weight gain comes up frequently in my work, but usually in private conversations. People want to stop restricting (because, obviously, it’s deeply unpleasant and super oppressive) but have been conditioned to fear what the body may do once it’s no longer being deprived. We as a culture are terrified of the undisciplined body that is governed by pleasure. Omg colonialism!

Weight gain is — in my anecdotal experience — quite common once you stop attempting to control your weight.

I know that this probably sounds obvious now that you’re reading it on the internet, but for many, this matter is shrouded in mystery. I’ll admit, when I was a fledgling fat activist this topic was never discussed. I understand why: we’re trying to recover from years of food-related trauma and fatphobia; the last thing we need to do is process about weight while we’re new to the practice of accepting our bodies and letting go of fear-based living.

I’ve never publicly told the nitty-gritty story of my transition out of dieting, and I think it’s time to change that. I was weight-cycling and restricting from about age 7 or 8 to about age 25 or 26. Restriction ranged from intentionally only eating low-fat foods, to exercising obsessively, to being an on-again-off-again vegetarian, to consuming diet pills, to actually attempting starvation. I considered all of these behaviors as within the range of “normal” weight-loss methods even though some of them were resolutely in the range of anorexic and orthorexic.

When I stopped restricting I was extremely hungry. I mean, I had been hungry the whole time, but once I made the commitment to zero diets 5ever, the sacred hunger was unleashed. My body had been, essentially, intentionally malnourished for almost twenty years at that point. So, yes, I ate every imaginable thing with heavy whipping cream in it that I could find. It was… fucking amazing.

I remember one post-diet-death night, I was making dinner with my boyfriend at the time. It was so fun making food with him because he had this unabashed food-love that was contagious. That night we decided to make “Slutty Mac & Cheese” as we called it. We had this enormous pot of macaroni elbows, and we already had cheddar and goat cheese in there. He suggested we keep adding more cheese, whatever was in the fridge. I think we ended up putting five cheeses into the pot and then adding bacon and the bacon grease from the frying pan. We giggled demonically throughout the entire experience.

Food had become a lost lover, an estranged BFF.

So I returned to my hunger with vigor. When I stopped intentionally not giving myself enough food I was able to gain weight. This was a good thing! As a naturally fat person, my anorexic and orthorexic behavior was actually keeping me at an artificially low weight (even though I was still fat at my artificially low weight).

Over the next three or four years, I gained weight steadily. Even as a fat activist who knew she never wanted to diet again, I can’t say that I felt totally zen about it. Duh, we live in a culture that hates fat women! If you grew up being emotionally terrorized like I was, the idea of letting Jesus take the wheel around your body size feels like a huge, terrifying bat call to every bigot within 1000 miles.

Did my weight gain change my dating pool? Yes.

Did it change what clothing I had access to? Yes.

Did the world end? Did a house fall on me? Did I never go on a date or buy a cute thing ever again? No.

Would I do it all over again in a heartbeat? Yes.

No dude or dress is worth me not having my full humanity and the freedom to eat and do what I want.

When people express fear about fat acceptance, I know they’re afraid of having (even) less access to the things they want the most – love, success, freedom. But dieting doesn’t give us those things. It gives us the shell of those things at a premium cost (like our mental and spiritual health, being surrounded by people whose interest is conditional, etc.) #NotWorthItGirl

My story is not everyone’s story, but it’s common enough I thought I’d share it. Our bodies are amazing — and, in fact, unpredictable — entities. Neither I nor anyone else can give anyone guarantees around weight floors or ceilings, but I can tell you this: no amount of weight control feels as good as tiramisu and freedom taste.