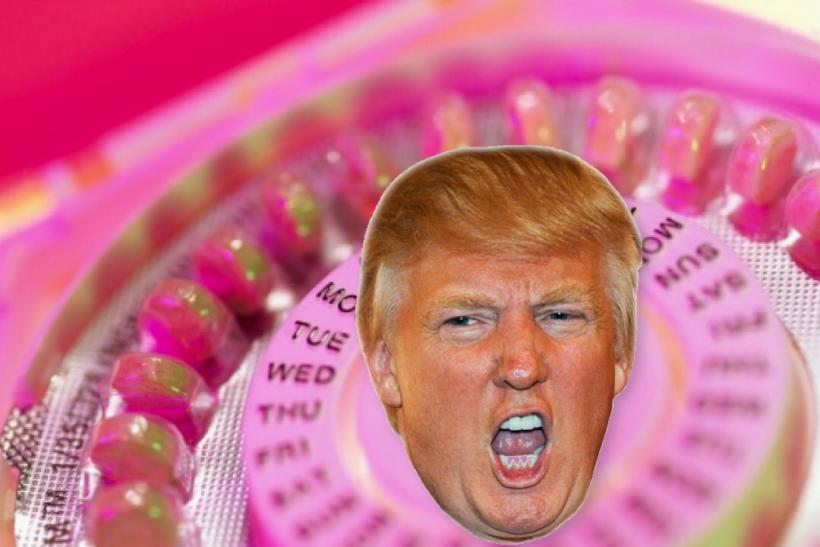 Maybe his face is birth control?

One would suppose that between trashing the Paris Climate agreement, alienating our European allies, fending off Russiagate, and Tweeting — Trump would be extremely busy.

Yet, he has found time to impact if the birth control used by American women receives coverage from their health insurance. (Somehow, I get the feeling that Mike Pence — who calls his wife “Mother” — was a factor in this.)

Here’s a rundown on the impending situation…

Under the Affordable Care Act (Obamacare mandate in 2012), “essential” health care services were encompassed. Included in the preventative care category was birth control. As a result, prescription birth control was made available to 55 million women at no cost. (There were also plenty of nasty arguments at the time. Check out Sandra Fluke, in case you have forgotten that slut-shaming episode courtesy of Rush Limbaugh.)

Stats showed that with an increase in FDA-approved contraceptive methods, there was a drop in abortions and unplanned pregnancies. (Isn’t that what the Republicans want?) Collectively, during the first year the rule went into effect, women saved over $1.4 billion.

Then came the Hobby Lobby case, heard by the Supreme Court. A majority of five male judges decided that “corporations controlled by religious families cannot be required to pay for contraception coverage for their female workers.”

(It was also the Supreme Court that ruled in 1965 to decriminalize the use of contraception for “married couples.”)

The Obama rule continued to be challenged, and Trump used the issue as a talking point on the campaign trail. On May 4, the “National Day of Prayer,” Trump made a big show of signing an executive order that called for "Promoting Free Speech and Religious Liberty." It also called on the Department of Health and Human Services (HHS) to take a new look at dispensing "regulatory relief" to companies that didn’t like the Obamacare birth control rules. Secretary of HHS, Tom Price, was thrilled to spearhead this action. He is an opponent of abortion and the Obama contraceptive order.

Once again, Trump is out of step with a majority of the country.

A 2016 poll showed that 67 percent of Americans believe “employers should be required to cover birth control — even when employers claim a religious objection.” In the 18-29 age bracket, the number goes up to 75 percent.

Planned Parenthood has been vocal in speaking up about this latest development. Dawn Laguens, the Executive Vice President, said:

“Under the Trump administration, we are now facing an immediate future where a woman's ability to make a most basic and personal decision ⎯ when and if to have a child ⎯ could be limited by her boss. If the administration moves forward with the proposal that was leaked, women across the country could be denied insurance coverage for birth control on a whim from their employer or university.” She noted, “We are at risk of losing a lifetime of progress.”

The larger problem is that those who the Trump teams suggests can pick up the slack for women who can’t afford the price of IUDs or birth control pills, are those very same entities that are on the chopping block. If the 2018 budget doesn’t kill them, the Republican health care bill will. This includes grants for health care centers, Medicaid, Title X, and Planned Parenthood.

The good news is that if this latest initiative to impact women’s reproductive rights gets traction, the ACLU and the National Women’s Law Center (NWLC) are primed to file law suits.

The ACLU stated: We’ll see the Trump administration in court if they try to follow through on these plans.”

The NWLC stated: “The Trump Administration should be ready for a fight if it takes away this essential coverage. If the rule is made final, we will file a lawsuit against it.”

Stay tuned, and if you were considering an IUD, now is the time to get it.

If you like this article, please share it! Your clicks keep us alive!
Tags
Trump
birth control
IUD
women's health
pregnancy
Politics
biology