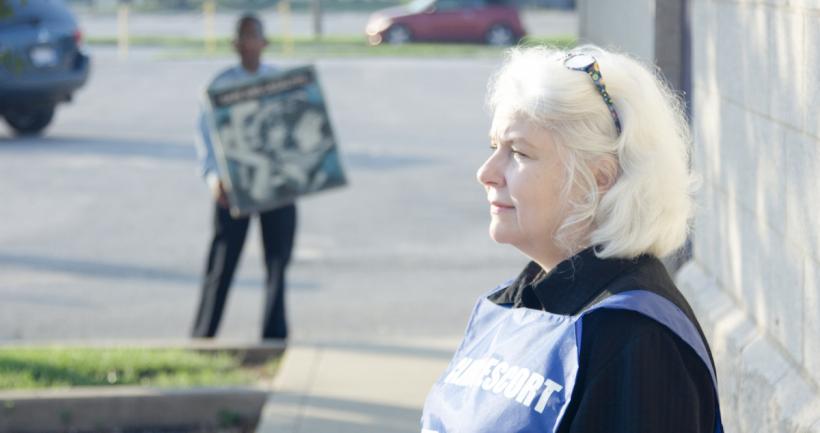 Abortion: Stories Women Tell, directed by Tracy Droz Tragos, looks at one of America’s most contentious debates through the prism of personal stories.

The documentary, premiering tonight on HBO, is set in Missouri, where Droz Tragos hails from. The state has one of the toughest abortion laws on the books. Currently, there is only one operative clinic. A 72-hour waiting period was enacted in 2014, with no exception for rape or incest.

Droz Tragos follows the intimate accounts of women as they grapple with the impact of their pregnancies and how the crisis affects the trajectory of their lives. The insights revealed are quite different from the political pronouncements of elected officials.

A parallel narrative tracks “pro-life” advocates who want to abolish abortion. They are deeply influenced by religious beliefs. They plant themselves at the Hope Clinic to confront patients with graphic photographs, statues of the Virgin Mary, and invective laced with praise for the Lord.

It’s an exhausting and disturbing look at two sets of belief systems that are miles apart.

A husband and wife discuss learning that their developing twelve-week-old has a skull that has not formed and is missing limbs. The genetic defects mean that there will not be survival beyond birth. They self-identify as Christians, who had the support of their pastor in their difficult decision to terminate.

Not all the stories end with an abortion. Te’Aundra, who had dreams of improving her life through higher education, keeps her baby. She had been working two jobs and had been offered a basketball scholarship. Te’Aundra was willing to give up the baby for adoption, but the father was not in agreement with that decision (which could create problems for the adoptive parents down the line). However, he had no interest in helping to raise the child.

Women relate that they are overwhelmed by the basic need to survive. They suffer from a lack of finances, domestic violence, prior drug addiction, or the desire to become an adult before having a baby. Frequently, they are alone and without emotional support. Many of the youngest girls would be kicked out of their homes if they shared the predicament with their families.

For women who already have children and can barely keep their heads above water  — another child would sink them.

Those who believe that life begins at conception view their anti-abortion beliefs as a calling — usually directly from God. Conversations reflect values that maintain abortion is murder and results in eternal damnation. Kathy, who learned from her father that she was almost aborted, reveals that she has always felt “a kinship with the baby in the womb.”

One of the strongest interactions in the film takes place at a college student center. On the way there, Reagan, a leader in the Students for Life of America movement, speaks directly to the camera. She explains that she is a different breed of activist, set apart from the “stigma of pro-lifers as old, crazy religious nuts.” Yet, when she sets up her booth there are handouts asserting that “Abortion=Breast Cancer” and signs saying, “3700 babies aborted daily.”

A young woman, close in age to Reagan, confronts her. She recognizes Reagan as an on-site demonstrator who prays at the Planned Parenthood facility where she is an escort.

“Why protest this organization when it’s just one thing [abortion] that it does?” She talks about the women seeking affordable gynecological services. She presses Reagan on who will adopt all the children that don’t fit the idealized version of an adoptee. Who will be there for the baby that has physical or mental difficulties, or is from the inner cities? As Reagan packs up her materials, she appears shaken by the pragmatic questions of her challenger.

It is clear that the combination of religion and shame is toxic.

70% of adults in Missouri have an absolute belief in God. Belief in Hell among adults is 66%. Given these stats, it’s not surprising that a young woman who gave up her child for adoption says, “If you have an abortion, you cannot go to heaven.”

There is an overt disconnect between the quiet pain of those seeking an abortion and the proselytizing (or harassment, depending on your point of view) of those Christian Missourians who want to “make abortion unthinkable.” Shots of the landscape with billboards condemning abortion are pervasive. Rallying cries include, “All in Christ, for Pro-Life.” Supporters are revved up with the rhetorical question, “What are you willing to live for or give your life for?”

Amie, a single mother who is 30, works seventy hours a week to support her two children. When she arrives at Hope Clinic after a 200-mile drive, a parking lot regular greets her with, “You don’t have to kill your baby.”

“Why should I be ashamed?” she asks with a mixture of anger and frustration. “It’s not fair to have to deal with shit like that.” Trying to make ends meet on the tips she earns as a waitress and bartender, her concern is for the children she is raising. Falling within the six to nine-week time frame, she opts to use the abortion pill which will loosen the fetus from the uterine wall.

Staff physician, Dr. Erin, talks about the difference between when she worked at Planned Parenthood in Chicago and her experience in St. Louis. In her new neighborhood, protestors showed up at her house. She speaks matter-of-factly about what the future may hold.

According to an older man who seems to be at the Hope Clinic on a daily basis, “God is going to destroy America if we don’t repent very quickly.”

A nurse goes outside to take a break. She watches a father and his daughter. He is singing a well-known spiritual with his own lyrics: “He’s got the unborn babies, in his hands.” They switch to another hymn, “Yes, Jesus loves me.” She comments, “I guess they think we don’t believe in God or anything like that. That kind of bothers me when they do that. They think we don’t care about God. But we’re no different than anybody else.”

There are plenty of tears shed on both sides.

The female guard at the clinic, Chi Chi, has the final word. Throughout the film she has commented on the action, punctuating it with her insights.

“It’s your choice. I let them know, it’s their choice. Everything is your decision. God loves everybody.”