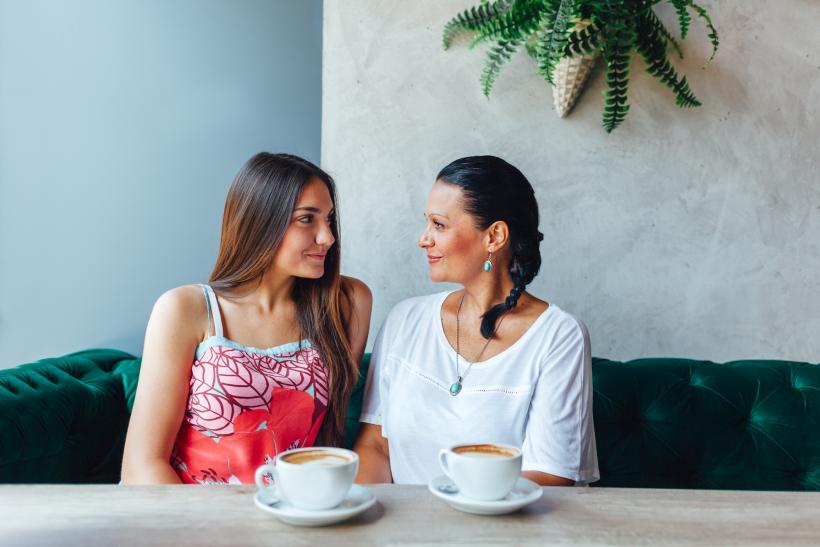 Talk to kids about abortion as one possible outcome of pregnancy.

Many parents feel hesitant to bring up the topic of abortion with their kids. But considering that abortion is not covered in school sex ed classes, avoiding it leaves kids' information sources to the internet or billboards, which are littered with anti-choice propaganda, misinformation, and other polarizing viewpoints.

But, untangling facts about abortion from the politics of abortion is an important thing to do if we want to do the more significant work of de-stigmatizing a necessary medical procedure. And shattering stigma can have a profound effect on our children's future health and their ability to access certain forms of medical care.

Some parents shared with us about how they discuss abortion with their kids. Here is what they had to say:

Talk about abortion as one possible outcome of pregnancy.

Sarah Tarver-Wahlquist is a member of the Tucson Abortion Support Collective in Tucson, Arizona. Sarah's oldest was eight when she started discussing abortion with him. When he responded, aghast, and asked if abortion was “killing babies,” she immediately regretting having waited so long to start the conversation.

“We now talk about abortion as one possible outcome of a pregnancy,” says Sarah, “And we talk about some of the statistics — that one in three women will have an abortion in her reproductive life, and that the majority of people who have abortions are already parents — to emphasize that abortion is a normal part of life and a decision that many people will choose to make.”

Sarah explains the different ways that people can feel about their pregnancies, and she tells her kids, "It's okay if it feels weird to you to think about abortion. I know you remember when I was pregnant and how happy we were, and how we talked about our fetus as our baby. That was our experience, but it isn't everyone's experience, and it's our job to support people to make their own decisions about what is best for their lives."

Talk about the reasons people might terminate their pregnancies.

Rachel C. from Denver says, “Basically, I explained it as a woman could be pregnant and for whatever reason need not to be. Maybe she's sick. Maybe she isn't ready to be a mother. Maybe the fetus is very sick. So she can have an abortion.”

Nekole S. from Seattle reminds her girls (eight and twelve years old) that it takes a lot to raise a baby. “They also know my dad didn’t really stick around and they know some of the implications of that.”

Nekole says that personalizing it can help kids understand and relate to reasons a person might have an abortion.

“We talked about how some people don't want [abortion] to be an option,” says Rachel.

She says that she reminds her kids that it's important to let pregnant people choose what they need to do to keep mentally, physically, and emotionally healthy.

Talk about why the choice is important.

Grace A., is an American expat living in Uruguay. “My discussions with my kids haven't been because I needed an abortion, myself, but because in this age they have been exposed to the idea pretty young,” she says.

Having kids who grew up in “Red Country” Texas, Grace says her kids regularly were exposed to anti-abortion imagery from the time they could read.

When Grace began to consider broaching the subject of abortion with her kids (when they were around six or seven years old), she remembered a story from her childhood, Watership Down, that helped her understand the concept of abortion when she was a child.

“In the book, the rabbits explain re-absorption of litters into the doe's body as a gift from "Lord Frith," fulfillment of a promise made to Elahrairah the rabbit Prince that no rabbit would ever be born into conditions that were not good for it (lack of food for the warren, overcrowding, sick mother, hunters close by).”

Grace used that story to explain to her kids how pregnant anythings could choose not to bring little ones into a bad situation and that we should trust that the pregnant person knows best.

Nerd out on the science of it.

When she talks about fetal development, that's when she brings up abortion. Nekole had an abortion at five weeks, and she's openly discussed it with her girls, explaining exactly what was taken out of her uterus at that stage of her pregnancy.

“I think what’s helpful is I know how I think/feel about it, so the narrative is always the same whenever we visit it,” Nekole says.

Since her abortion was the result of an unplanned pregnancy, she also uses that story to illustrate the importance of always using protection.

“My story is that I got pregnant having unprotected sex when I was still bleeding, so it's a nice segway into condoms no matter what,” she says.

Talk about what happens during an abortion.

When Samantha D.'s daughter was six, Samantha's friend stayed with them at their Pittsburgh home when her friend was having an abortion.

Her daughter asked lots of questions, like why their friend wasn't feeling well. Samantha's friend said that it was okay to discuss what was happening and so she was able to tell her daughter about what happens during an abortion while she observed someone experiencing one.

Sam let her daughter lead with questions, and she answered accordingly. “She asked if there was a baby in her right now, and I told her that the sperm and egg had combined, but it was not growing into a baby anymore because my friend had taken medicine to stop that process,” says Sam.

Sam's daughter seemed to understand, and Sam says she was very considerate of her friend’s comfort. “She even acted as a mini doula by serving things to her, asking her about how she was doing, keeping quiet and generally calm in her presence, and relaxing with her to keep her company as she rested.”

Ultimately, Sarah Tarver-Wahlquist says that talking to kids early and often about abortion is much bigger than a conversation about a medical procedure. She says it's part of a bigger narrative of talking to them about the importance of autonomy, consent, and choice.

If you like this article, please share it! Your clicks keep us alive!
Tags
abortion
Planned Parenthood
Kids
moms
advice pro-choice

How To Talk To Kids About Abortion
Kathi Valeii

Why We Need To Include Abortion In Sex Ed
Kathi Valeii