Why We Need To Include Abortion In Sex Ed 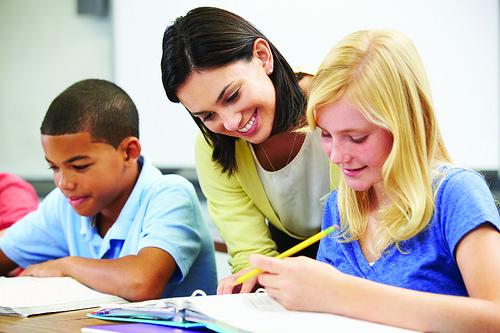 Young people deserve to have information about where, when, and how to access abortion. Image: Thinkstock.

Apparently, “abortion” is like talking about Jesus or the Buddha — forbidden, as though it's a form of proselytizing, instead of a fundamental healthcare option.

It's that time of year again, when eighth grade parents in my district receive the curriculum outline for abstinence-emphasized reproductive health education. As I scroll through the list, I note that a huge amount of class time is, predictably, devoted to different variations of saying no to sex: “Not Everybody's Having Sex,” “Deciding Not to Have Sex,” “Saying No to Having Sex” — these are all distinct classes.

I'm glad to see two classes devoted to safer choices and using protection. But, wedged between all of the classes on abstinence vs. safer sex is the thing that makes me want to scream.

It's the class titled, “Impact of Pregnancy,” which is followed by “Adoption and Safe Delivery.”

For a minute, I frantically scan to the end of the outline for that other option — you know, the one other than birth or... birth.

And then I remember.

Even though in the US, abortion is a safe and legal option, conservative lawmakers in my state have made sure that among the hundreds of regulations restricting access to legal abortion, restricting the mere mention of it in public schools is up at the tippy top.

Apparently, “abortion” is like talking about Jesus or the Buddha — forbidden, as though it's a form of proselytizing, instead of a fundamental healthcare option.

American teachers are required to teach about abortion like they're asked to teach about the fact that the US was founded on genocide and slavery — you know, as though all of it didn't even exist.

The implication is that some healthcare options are so scandalous, we must not even mention them. The effect that this has on a vulnerable young person's self-image is detrimentally huge.

According to research, 1 in 3 cisgender women will have an abortion in her lifetime — some of those who need an abortion will be our children; some will be our children's friends. When we can't even speak the word “abortion” out loud in a classroom dedicated to discussing reproductive health, we actively perpetuate a culture that shames certain people about their bodies and their choices.

Abortion isn't a belief system; it is a legal, safe, and necessary component of healthcare.

There are so many things I desperately want my kids to understand, when it comes to abortion, but mostly they hinge on this: abortion isn't “murder,” and it isn't the “ultimate child abuse,” as the billboards en route to their dad's house would have them believe.

Abortion is one of myriad responsible and thoughtful responses to an unintended pregnancy.

Abortion is one of the most important options available to young people, and eliminating the mention of it from public education isn't just ignorant and stigmatizing — it places our kids at risk.

No person should be coerced or forced into carrying a pregnancy — especially a teen.

No person should feel pressured to become a parent before they are ready — especially a teen.

And no child should consider dangerous alternatives to safe abortion because abortion is unnecessarily stigmatized and increasingly hard to access.

Young people deserve to have information about where, when, and how to access abortion. And they shouldn't have to dig it out on the Internet, wedged between anti-choice propaganda disguised as “crisis pregnancy” information.

Abortion isn't a belief system; it is a legal, safe, and necessary component of healthcare.

If we really cared about our kids, we'd stop tip-toeing around it, like the mere mention of it is some sort of violation of the separation of church and state.

We aren't actually educating kids about reproductive healthcare when much of that education is based on lies of omission.

How To Talk To Kids About Abortion
Kathi Valeii

Why We Need To Include Abortion In Sex Ed
Kathi Valeii