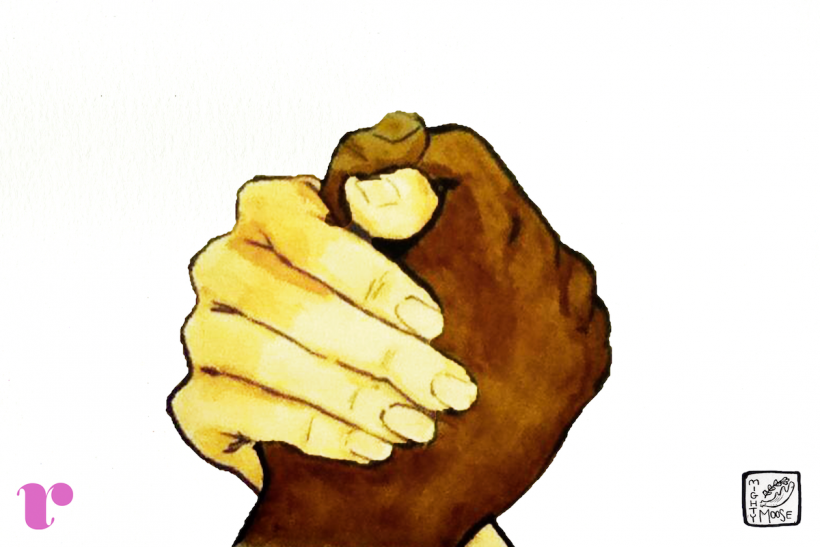 My first reaction to the incident in Charlottesville was the same as that for a lot of Black people. I bemoaned the state of race relations in the United States. I mourned the loss of rational thought and compassion that would lead to KKK and Nazi participation. Plus I was sad and angry about the injury and loss of life among the counter-protesters.

But I had another emotion, a new feeling that I wasn’t quite sure how to process.

You see, I’m in an interracial relationship. It’s not like every time I talk to my boyfriend Jay I think, “Hey, he’s white,” but it comes up sometimes because race is a thing. It usually doesn’t bother me that we come from different backgrounds, but when I read about Charlottesville, I looked at Jay as he sat on my bed and thought, “Some people want to kill us for this, ” and it scared the shit out of me.

My fear wasn’t just fear of violence, which I generally feel, as a Black person, whenever a racial incident enters the news cycle. That fear is common. My parents raised me with that fear. They taught me not to be at certain places at certain times because racists were dangerous and would hurt me. They taught me not to trust white people entirely because bigots walked among us then hid their faces behind hoods to do their dirty work. My parents were both raised in the Jim Crow south, so the lessons they taught me were learned the hard way.

But the anxiety I felt looking at Jay wasn’t the fear that someone would hurt us when we were together. It was the dread that race and racism and other people’s ignorance would ruin our relationship.

And I felt ill-equipped to handle the emotional toll of living and loving in a country founded on a difference that still hadn’t figured out how to be different without hatred.

The only blueprint we have for interracial love and fighting the good fight is Loving v. Virginia, and that couple was more concerned with being left alone than with being role models. Maybe they thought that their relationship was more important than defeating the racist establishment. And I understood that sentiment because I wanted my relationship to be about Jay’s and my feelings for each other rather than how other people felt about us as a couple. But that didn’t change the fact that people now felt emboldened enough to put their virulent racism into action, and that hate on the national news often led to hate on the local level.

I wanted to know if he thought what we had, and what we could build, was worth suffering countless microaggressions and real aggressions. I was used to the struggle, but Jay wasn’t, not in an intensely personal way.

It’s worth mentioning that Jay is not the kind of white person who doesn’t acknowledge the difficulties faced by people who don’t look like him. He’s very conscious of the many levels of his privilege and is equally conscious about not taking his privilege for granted. He becomes outraged when hearing about or witnessing injustice. And he calls people out on their racism, sexism, homophobia, and whatever other ideology prevents them from being decent human beings. Jay is a real ally, and I probably wouldn’t have dated him if he wasn’t. But mounting a cerebral argument against extremist doctrine is different than defending your Black girlfriend in a racist skirmish. And would the fact that Jay now had proverbial skin in this discrimination game make him feel differently about our relationship?

The events in Charlottesville have already impacted Jay and me personally. On Saturday morning we were walking hand in hand down a street in my gentrifying-but-still-mostly-Black neighborhood. Neither of us knew about the riots and protests because we generally don’t consume media when we’re together. It was fun to stroll along with Jay, pointing out local landmarks and eateries we might try at a later date. Until we turned a corner and ran into an installation of Black Israelites.

In case you’re not familiar, Black Israelites are an African-American quasi-religious group that claims to have descended from one of the 12 original tribes of Israel. Some followers also have Black nationalist tendencies, and my white boyfriend and I had just wandered into the middle of their weekly diatribe. I visibly braced myself for the verbal impact, for the moment their ringleader turned his focus on us, on me for fraternizing with “the enemy.” Luckily the speaker sputtered then continued his ramble, but the spectators were less forgiving.

Related: A Guide For White People Who Don’t Think That Thing Is Racist

I got sharp, stern looks of derision from a few folks as we walked by. Someone got up in Jay’s face which he ignored and continued walking. I wondered why we’d gotten so much hostility until I turned on the news. Then I realized that Nazi white supremacists, or whatever they want to be called, on TV were tantamount to a declaration of war for lots of Black people. And that Jay and I were supposed to be on opposite sides.

We didn’t talk about what happened to us until later. Originally, I hadn’t planned on talking about it at all because Jay and I know we’re aligned with our politics. There’s nothing to discuss if you both agree that the bad people are bad, and the wrong people are wrong, and we’re both talking about the same people. But our relationship was built on complete honesty and open communication, so I felt the responsibility to bring up the Black Israelites incident. I asked Jay if he thought we needed to talk about it, and he said that we could talk if I needed to but that everything was fine. Which it was, politically speaking.

But I wanted to talk about something deeper. I wanted to know if he’d experienced racial aggression for the first time and had re-evaluated our relationship. I wanted to know if he thought what we had, and what we could build, was worth suffering countless microaggressions and real aggressions. I was used to the struggle, but Jay wasn’t, not in an intensely personal way. It’s one thing to say, “Hey, stop treating people this way,” but quite another to say, “This is someone I care for; stop treating her this way.”

I’ll still hold your hand in public even if bigots stare us down.

That’s what I told Jay. After it came out of my mouth, I had to check in with myself to make sure that I really meant it. It meant choosing to honor our relationship even if other people tried to make it difficult for us. It meant standing up for being in a relationship that made me happy. And it meant standing up to people who looked like me when they had less than positive reactions to my relationship. After some good time in my head, I reconfirmed to myself that our affair was worth preserving.

Jay agreed with me, taking on the task of defending us when the offenders are on the white side of the fence. That seemed right to me — that we could be political allies and personal allies at the same time. I saw his willingness to stick beside me when the outside world got rough as an important emotional commitment. Maybe he didn’t see the gravity of it, but I felt like Jay had chosen to be with me even though our relationship is not going to be easy for reasons outside of our control. And I valued him for making that choice.

Learning that my boyfriend was prepared to fight on my behalf was a profound realization — one that I’d never encountered in other relationships.

Does this mean that my relationship with Jay will last forever? Not in the slightest. As with every relationship, there’s always the possibility that someone will mess up or run away or commit an egregious emotional wrong. All relationships have that possibility regardless of race or ethnicity. But I believe that if the Nazis and bigots try to hurt us, we’ll be prepared to both defend our rights and protect our relationship. Supporting freedom and justice is much easier when doing so with an equally committed partner.