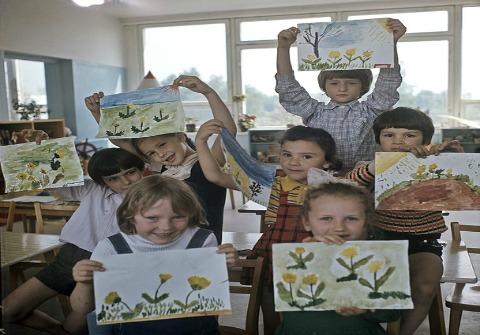 Little boys draw dump trucks, and little girls scrawl bunnies. Turns out these old truisms are fading among the enlightened children of today: New research on kid’s drawings hailing from around the globe indicate that children’s gender-perception may be shifting.

While long-held observations by therapists and educators believe it’s "normal" for boys to draw monsters, machines, and weapons, and for girls to opt for nature and animals, a recent study reveals this dichotomy is no longer appropriate for judging children’s development—especially for boys. The study analyzed 700 drawings from 13 countries collected by school psychologists, and found that in some countries use of stereotypically masculine images was not significantly different from girls.

Shocker: While in European countries, boys drew vehicles and weapons significantly more their lady counterparts, this wasn’t the case in Mexico, Africa, or—wait for it—the U.S.! Similarly, in the U.S. animals and bugs were drawn equally by the sexes. This is notable in part as gender-focused toys are prevalent in the West, and because the U.S. has a high rate of violent crime. And because this is ‘Merica. The study didn’t posit theories for why American boys have drifted from traditionally-masculine images, and the research didn’t control for socioeconomic background—which might show more stratification in results.

I hope more research pursues this path—what could be the cause? With the more equitable treatment of gender, is society subtly encouraging less violence imagery to boys? Are the extreme-right's worst fears about the castration of men coming true—doubly insulting because the f*cking French are beating us in boyhood fascination with masculine tropes?

Have to admit that this feminazi feels great about the prospect of little boys and little girls all focusing on bugs and animals, rather than weapons or princesses. Cultivate the mind—let gender follow.

If you like this article, please share it! Your clicks keep us alive!
Tags
Research
Children
gender
drawings
Boys
girls
weapons
machines