Silicon Valley Has an Ageism Problem! And Plastic Surgeons Are Happy To Oblige the Obsession 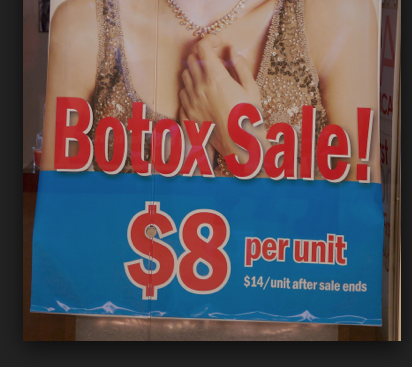 Silicon Valley is an eccentric place. Nerds, technology, money, trend-setting, counter-culturism, and a good dose of chauvinism all collide and co-mingle like a bastardized burrito. We previously discussed the trend of flying in NYC women for the women-hungry geek-bros of Silicon Valley, and now we’ve caught wind of another trend among the menfolk of Techland: plastic surgery.

Surely this can’t be! you say. Our culture has long driven home that moneyed men’s appearances don’t matter—it’s the young hot women who need the plastic surgery. But according to a recent investigative article, Silicon valley dudes are defying the status quo. The most interesting element? They aren’t necessarily trying to look more attractive; rather, they’re trying—specifically—to look younger. Because, you see, in addition to sexism, Silicon Valley has a bit of an ageism problem. Or maybe a big one: reporter Noam Scheiber claims it is “one of the most ageist places in America.”

And tech reporter Natasha Tiku concurs, noting she has commonly heard from tech starters that “it’s impossible to raise funding if you’re not a twenty-something dude,” and that when it comes to Silicon Valley hiring, resumes shouldn’t include much more than “Dropped out of Prestigious University.”

And if you want to get it straight from the horse’s mouth, take a comment Facebook CEO Mark Zuckerberg made to an audience at Stanford: “Young people are just smarter.” And a large applicant middleman company for Silicon Valley explicitly states on its careers page: “We Want People Who Have Their Best Work Ahead of Them, Not Behind Them.”

So what’s a middle-aged, experienced startup founder/job applicant to do? Seek out medical intervention to try to seem a little less mature of course! (And a little more like their brain is still developing.) And erase the first decade of their resume!

A San Francisco plastic surgeon who caters to the tech industry clientele revealed that patients favor laser treatments to clear broken blood vessels and skin splotches, ultherapy (ultrasound waves that tighten the skin) and an old faithful—Botox injections. Don’t forget about hair transplants and other measures to combat balding! They want the procedures to be out-patient and require little down time, so they can return to the office as if nothing happened. Nothing but a sprinkling of youth-giving pixie dust!

The obsession with youth seems pretty absurd given that—as Scheiber reports—the premise of youthful innovation isn’t really that accurate. Research indicates that historically, people in their thirties have contributed about 40% of innovations to major industries, and those in their forties about 30%. Both people over 50 and twenty something have contributed the same amount: a relatively measly 14%. And a study focusing on the last ten years found that the average age of a founder of a billion-dollar company was a geriatric 34. Looks like the much pitied middle-agers are doing the innovative heaving lifting.

No one wants the workplace to regress to an old-time union scenario in which seniority rules, and young people get crumbs for no reason other than their age. The recession has really pulled a number on Millennials, and given young people a fair chance (we ourselves are in this demographic, after all). But worshipping the young simply for being in that transient life stage is silly, unfair and, as it turns out, not financially sound.

Nothing wrong with a city of smoking-hot, soon-to-be grandpas I suppose.

If you like this article, please share it! Your clicks keep us alive!
Tags
Silicon Valley
sexism
Ageism
plastic surgery
Youth
Ivy League