Textual Tension: Is it Fair to Judge the Way Someone Texts? 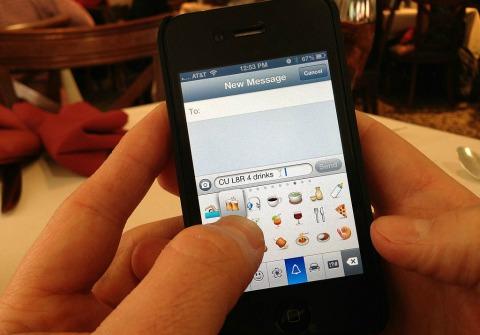 Everyone is so judgy when it comes to dating. Stupid little things always tick off people.

I can't date someone who doesn't like the Beatles.

His hat was awful. No second date.

That dude looked too comfortable in my room. Nope. Not happening.

I mean, do you realize how dumb these critiques sound?

I should know. All four complaints were uttered from my own lips in relation to the very real dating life of Giana. I'm quite aware (thanks mom) that these are all seriously lame complaints. The latest exploration in nitpicky love was featured on YourTango today when the staff prompted an array of women in their 20s to lament about their biggest texting deal breakers. To be fair, text etiquette is a real issue. Usually, the concerns surround clarity, general politeness and safety (like, when driving). We all have our weird ticks, but is judging someone based on how they text okay?

To be fair, creeper texts are not okay. Obsessive texting is not okay. Making someone feel uncomfortable is not okay. Some of the complaints just don't seem fair though.

"I hate excessive emojis and exclamation marks! It's my worst nightmare, and total turnoff," said Kim.

Honestly, I don't get emojis either. Apologies to my fellow Millennials for sucking at our generation. But I'm not alone. A lot of people think they're childish. Truth is, dating is weird and awkward and people run out of things to say quickly, but want to keep communicating. That's a compliment!

Then there were some remarks about poor grammar. Because, you know, texting is so formal that it's a travesty when someone mixes up "their" "there" and "they're." Realistically, with AutoCorrect and, oh, the fact that you're probably completing the message quickly to get back to your awesome life, grammar slip ups are totally forgivable. People aren't necessarily unintelligent if they make a mistake.

"Sending multiple messages before I've had the chance to read or answer the first one. It's annoying and unnecessary, and at that point I'm not likely to respond to any of the messages!" laments Helena.

Clearly this chick isn't saddled with the lover-repellent curse that her namesake in Midsummer Night's Dream has. Sure, she is right to say that this is ultra annoying—but again, not the biggest red flag in the battlefield of love. Eagerness can be cute! I remember the guys who openly said, "sorry, you make me nervous" much better than the cool cucumbers who ironically raised their brows while I spoke.

Now, we're not out to attack these fierce females here. They probably were irritated by these habits. We're sensing a pattern though. Here's the truth: if you're not into someone, miniscule things they do will totally annoy you. This will make you overanalyze their behaviors and cast judgment. We've talked about the limerence theory before, and we'll hash out some bits of it to illustrate just how not into it you have to be to feel this way.

Limerence is that crazy concoction of hormones that fly through your brain when you're stuck on someone. Butterflies, stuttering, nerves, obsessive thinking and general drug-addict-like behavior can all be attributed to this. Though it (usually) fades away within the first four years of your relationship, it's an important component in the initial bonding phase. A major aspect of limerence is the desire to correlate all of your negative perceptions about that person with a postive twist.

So, if you really liked your little text companion you wouldn't mind excessive emojis. Your brain would rationalize it, and say, "usually I hate that, but s/he does it better!"

So, is it fair to judge someone based on texting? Sort of. See, you can determine your true feelings for someone based on how you feel when communicating with them. But if you hold all potential lovers to standards you created based off someone you didn't dig anyway, you're setting yourself up for failure. Listen to your feelings, but be careful that you don't let an awesome person slip through your texting thumbs.

Image: I mean, I'd at least let him take me out to coffee. Courtesy of, Wikimedia.

If you like this article, please share it! Your clicks keep us alive!
Tags
texting
sexting
Love
Relationships
dating
conversation
limerence
judgmental
Science is Sweet
He's Just Not That Into You
fling
hook up
flirt
cute
gross
awkward
word vomit
butterflies